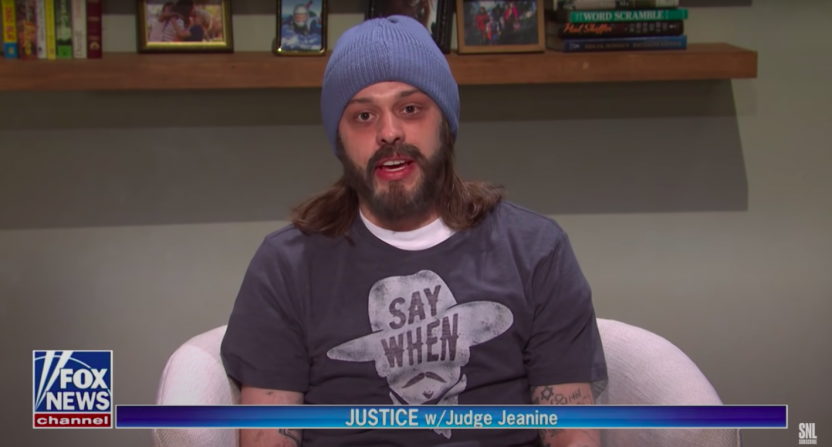 As soon as Green Bay Packers quarterback Aaron Rodgers wrapped up his wild interview on The Pat McAfee Show on Friday, in which he used the term “cancel culture” multiple times, said he was taking medical advice from Joe Rogan, and quoted Martin Luther King, Jr. in a defense of his line of thinking about vaccines, you just knew that Saturday Night Live was going to do something about it. (A full transcript of the interview is found here).

They didn’t waste any time, including Aaron Rodgers in the cold open of Saturday’s show with Pete Davidson portraying the guy some have taken to calling “Throw Rogan.”

The cold open is a spoof of Fox News‘ Justice with Judge Jeanine, featuring Cecily Strong as Jeanine Pirro. Her first guest is Davidson’s Rodgers, sporting the “Say When” t-shirt he was wearing on Friday (a reference to Doc Holiday who, interestingly enough, died at the age of 36 from a contagious respiratory illness).

Davidson immediately noted that Rodgers had hosted Jeopardy! earlier this year, something that many of the show’s fans take issue with now. Strong then noted how Rodgers used the term “my body, my choice” before Davidson’s Rodgers said, “It’s my body, my Covid, I can give it to whoever I want.” He then noted that the “woke mob” is coming for him and even State Farm is no longer offering him “the Rodgers rate.” (In reality, State Farm hasn’t commented on Rodgers’ vaccine status, though he did lose a partnership deal with a health organization).

Strong’s Pirro then asks if he lied about being vaccinated. Davidson’s Rodgers responds by saying, “I never lied. I took all my teammates into a huddle. Got all their faces three inches away from my wet mouth. And told them, trust me. I’m more or less immunized.” It’s a reference to the answer Rodgers gave back in August when asked if he’d been vaccinated.

Strong’s Pirro then says, “You said you didn’t get the vaccine because it might make you sterile, which is so insane I’m jealous I didn’t say it.” Davidson’s Rodgers wrapped up by adding, “hey, people can talk all they want. But at the end of the day, my record is still 7-1. Meaning, of the eight people I’ve infected, seven are fine.”

With that, Rodgers was out and the cold open continued with appearances by Governor-Elect Glenn Youngkin (played by Alex Moffat) and Donald Trump (played by James Austin Johnson).

All in all, a pretty standard gag for SNL. The State Farm joke fell flat but the play on the Packers’ record (7-1) was the best joke in the bit. Ultimately, it’s a sign of just what a big deal that interview was and how much Rodgers has put the spotlight on himself. Notorious for hating media critics, Rodgers has everyone training their bullseyes on him right. So we can probably expect a few more references to the “woke mob” in our future.