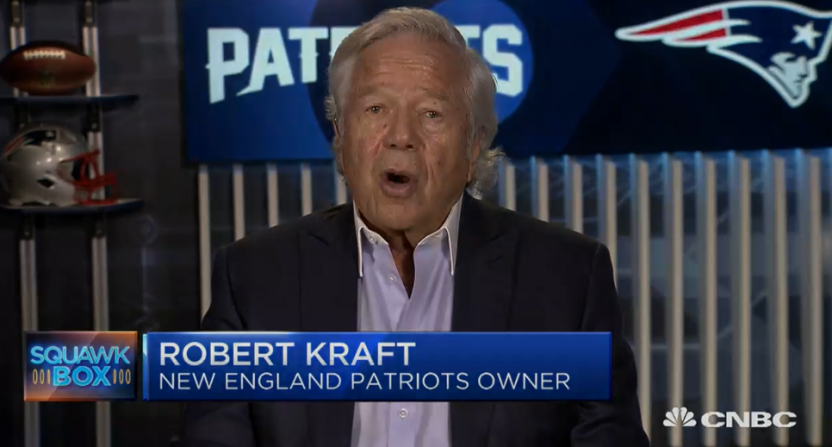 Network PR departments and NFL teams obviously have an interest in playing up the data that makes the ratings look the best, while those looking to mock the league for other reasons (including those who disagree with players’ protests) obviously have an interest in presenting the data that makes the ratings look the worst. But many journalists are trying to consider the positives and negatives and present a balanced picture of where the league stands and what the newsworthy part of the ratings actually is, and that’s what’s behind most of the media coverage of ratings, critical or not. Patriots’ owner Robert Kraft apparently thinks ratings criticism is because the league isn’t emphasizing the positives enough, though, as per quotes from his appearance on CNBC Friday (starting around the 3:00 mark of that clip):

“Let me just speak as the chair of the broadcast committee, and I’ve been involved for over 15 years, I think there’s a misconception about our ratings. If you think about it, like last night, which was the biggest news day of our history since the election of the president and everyone was absorbed with news, I’m sure those ratings are way up, our Thursday night game, our first game on Fox, and on Amazon, and on NFL Network, was up eight percent last night.”

“You know, in ’07, 22 of the top 100 programs were NFL games. Ten years later, in ’17, 72 of the top shows were NFL games. And the best news for the NBC family is for the seventh-straight year, Sunday Night Football was the number-one show on primetime TV. No other network has a record like that for a primetime show. So I think we’ve got to do a better job on our messaging. General television, broadcast television, ratings are down across the board, but the NFL is still pretty strong.”

Look, on one level, Kraft isn’t wrong there. There’s absolutely no question that the NFL remains one of the best properties in the current TV landscape and that the rest of TV has been hit hard as well, putting even lower-rated NFL games a much more important part of the top 100 shows. That’s why you get deals like Fox paying $3 billion for Thursday Night Football. And sure, this week’s Thursday night numbers were impressive, perhaps especially so considering the competition from news programs. But where Kraft is wrong is to say “I think we’ve got to do a better job on our messaging”; the NFL PR department has been beating the “look how great we are compared to the rest of TV” drum for a long time, and the various networks have also emphasized that message about their NFL ratings.

And the “Seventh-straight year” Sunday Night Football one is one that NBC trotted out hard in May, and one we even covered at face value then. But it’s notable that it comes with a disclaimer; that claim goes off American Idol only being #1 for 2005-06 through 2010-11, but that’s if both the Tuesday and Wednesday broadcasts of American Idol are averaged together. The Tuesday shows were the top-rated program in 2003-04 and 2004-05, so there’s an argument that American Idol in some form was on top for eight consecutive years. And thus, that SNF streak perhaps isn’t quite as unprecedented as Kraft (and NBC’s release before him) would like you to think.

Overall, those kinds of numbers and streaks are things network PR staffs care a lot about, but they all come with some asterisks. For example, also with Sunday Night Football, CBS was very happy to announce that The Big Bang Theory beat SNF from Sept. 19 to Dec. 25, 2016 in Nielsen Most Current (which included live+3 and live+7). NBC disputed that claim, arguing that the SNF broadcasts from before and after TBBT‘s run should be counted, and they wound up taking the season-long live+same day title anyway, but that stands as a case in point that you can get different results from this data if you just slice it a little differently.

And that’s what’s really at issue with Kraft’s point. The NFL and its broadcast partners have tried very hard to sell the “ratings are down across the board, but the NFL is still pretty strong” message he wants. Some out-and-out critics have largely ignored that context to present a “The NFL is failing” message, but that really hasn’t been the case in most journalistic treatments of the ratings. Instead, those have covered actual NFL changes from year to year (including the almost 10 percent year-over-year decline across the board last year and the approximate one percent year-over-year decline so far this year), while still noting that the NFL’s doing well compared to much of the rest of TV.

That latter part sometimes does get less coverage, but that’s because it’s not as newsworthy, especially on a week to week basis. It’s important context to keep in mind in any ratings article, but it’s the changes in NFL ratings year-over-year that are actually new information. There are only so many times you can say “Yes, the rest of TV is losing ratings too.” And yes, it’s valuable to point out how many shows the NFL has in the top 100 when that info comes out, or that Sunday Night Football remains atop the primetime pyramid even with lesser ratings relative to its past editions. But those aren’t every-week stories in their own right; they’re supplemental context.

Kraft may want that data sliced differently to tell a story that’s better for him and the league, like the one he tried to put forward on CNBC, and that’s understandable; it’s in his interest to do so. But the coverage of actual changes and not just the company line isn’t about any flaw in the NFL or its broadcast partners’ messaging, and Kraft’s suggestion there isn’t particularly fair to the PR people and NFL representatives who are already trying to spin ratings the way he wants them spun. That’s not always turning into the journalistic articles he wants not because of any fault in the messaging, but because the goal there is to cover what the news actually is, not just how the NFL wants to spin it. And Kraft and the NFL can’t do a whole lot to change that.