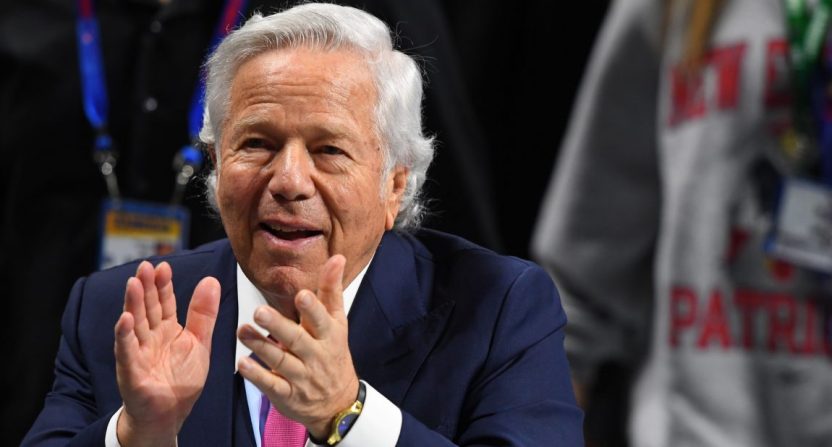 The NFL announcing booths saw remarkable movement this offseason. Joe Buck and Troy Aikman wound up going from Fox to ESPN for Monday Night Football, Mike Tirico joined Cris Collinsworth on NBC’s Sunday Night Football, Kevin Burkhardt and Greg Olsen took over Fox’s top Sunday booth (with Olsen’s seat likely going to Tom Brady at some point down the line), and Al Michaels went to Amazon to call Thursday Night Football alongside Kirk Herbstreit. But some of those moves could have gone quite differently. A new report from Andrew Marchand of The New York Post indicates that Michaels had been in talks with ESPN about Monday Night Football before Buck went there, and also that New England Patriots’ owner Robert Kraft (head of the NFL’s broadcasting committee) called Fox chairman Rupert Murdoch to lobby for them bringing Michaels in after Buck left.

Michaels’ eventual move to Amazon was one of the first potential moves discussed, with mentions of Amazon targeting him as early as June last year. But it was also one of the last to come to fruition, only being finalized in late March. During that time, a lot of other possibilities popped up, as Michaels indicated in a recent conversation with Marchand. Here’s what that piece says about the Kraft-Murdoch call:

Patriots owner Robert Kraft, who is chairman of the NFL’s broadcasting committee, reached out to Rupert Murdoch to try to land Fox’s top NFL play-by-play job for Michaels.

“When Kraft did that, I think it was more in terms of [Fox] has the Super Bowl two of the next three years and we want somebody [experienced],” Michaels said.

…With Buck gone, Fox did have internal discussions about Michaels. Those Super Bowls were two big steaks for the famously vegetable-averse Michaels.

“At one point, somebody called me, not from Fox, and said, ‘Fox is going to come after you,’” Michaels said. “But they didn’t.”

Kraft did call Rupert Murdoch on Michaels’ behalf, which raised the hope of Michaels breaking his tie with Pat Summerall, who also called 11 Super Bowls.

“That would’ve been interesting,” Michaels said.

It’s certainly notable that that outreach happened, and it’s one further illustration of how hands-on the NFL has often been with who calls its top games. The most infamous example of that came in 2016, where NBC brought in Tirico from ESPN to call Thursday Night Football games, but the NFL insisted on “top teams,” meaning that Michaels had to call both Thursday and Sunday games that year (despite apparently expressing his concerns over that workload before that NFL decision came down). The league relented ahead of the 2017 season, and Michaels tells Marchand here that he called Kraft and NFL commissioner Roger Goodell ahead of that season to make a case for Tirico and say he couldn’t do both Thursdays and Sundays.

In many other sports, it would be the networks that bought the rights that are making the decisions on who’s on the broadcasts, perhaps with some listening to league partners but not with this kind of league control. But the NFL has been more heavy-handed there, particularly around that 2016 Thursday night situation. And while the league outreach from Kraft to Murdoch didn’t wind up impacting the eventual Fox broadcast moves here, with Murdoch (and son Lachlan, Fox’s executive chairman) opting to let Fox Sports execs Eric Shanks and Brad Zager make the decision (and they wound up elevating Burkhardt rather than bringing in Michaels), it’s still unusual to see that a key NFL owner would make a call at this level to try and influence who’s calling games. (We’ve written about calls from team owners to Murdoch before, but the latest one wasn’t about broadcasters.) And that reinforces how involved the NFL can sometimes be in who broadcasts it.

The other notable tidbit out of this piece is Michaels telling Marchand that he almost wound up at ESPN, saying “I’m probably there” (if Buck didn’t follow Aikman) and “I was in their sights.  I know that, and you knew that, too. Yes. Could I have made a deal there? I don’t know.” That was during the period where Aikman’s deal was reported as done (late in February) and Buck was still at Fox. Buck was reportedly “atop” ESPN’s list, but as he’s said himself, he was still under contract at Fox, and could have stayed and signed an extension. But he cited reuniting with Aikman as a  “quality of life move,” one that let him maintain his chemistry with Aikman rather than having to start over with a new analyst. And that appears to have played a role in Michaels landing at Amazon. (However, as Michaels notes elsewhere here, he got some familiarity of his own out of this move thanks to Amazon bringing in long-time Sunday Night Football producer Fred Gaudelli. So this probably worked out decently all around.)