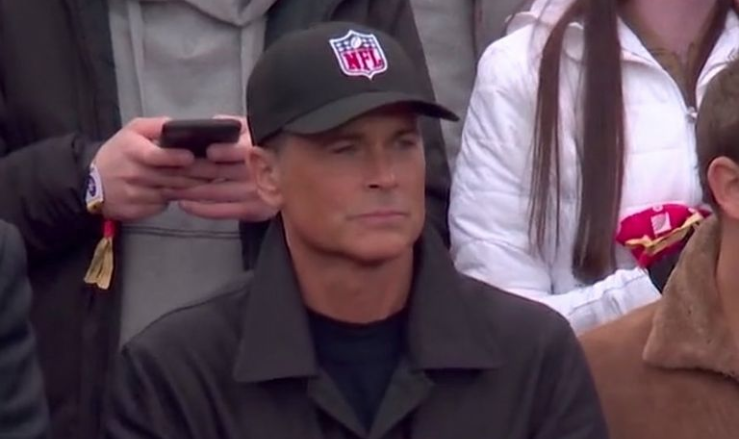 Sunday’s NFC Championship game between the Green Bay Packers and San Francisco 49ers was one of the few duds among what’s been an exciting NFL postseason. The 49ers took an early lead, largely due to a punishing running game and relentless defense that prevented the Packers from ever making the contest competitive.

That left viewers searching for sources of interest and amusement during the telecast. And late in the second quarter, Fox unintentionally provided a target for ridicule that all of Twitter could get behind.

During its years of baseball and football postseason coverage, the network has often shown celebrities in the audience who happen to be starring in upcoming Fox dramas and comedies. Though eye-rolling and sometimes irritating, it’s a sneaky way of promoting network programming — which is a big reason why (besides TV ratings, of course) these outlets purchase live sporting events, right?

With Fox set to premiere its latest drama, 9-1-1: Lone Star, after the NFC title game, the network put series star Rob Lowe in the Levi Stadium seats for a photo opportunity during a break in the action. Whether it was an attempt to blend in with the crowd by wearing a hat or an effort to be seen as a neutral spectator, Lowe wore a cap with the NFL logo on it. No Packers or 49ers allegiance here. Lowe was apparently a fan of the product known as the National Football League.

Viewers feasted on the opportunity to poke fun at the actor soon thereafter. Here’s a sampling:

This is what cop Rob Lowe thinks he should dress like if he wanted to blend in with NFL fans. pic.twitter.com/2Zv9tzGOQV

hey Rob Lowe which team are you rooting for
“uhhh… the NFL" pic.twitter.com/BAdlRyk6gD

Rob Lowe may be the first person in history to wear an NFL hat to an NFL game. pic.twitter.com/5esunlaadS

Rob Lowe being shown on camera wearing a plain NFL logo hat is the most Chris Traeger thing I’ve ever seen.

That last tweet mentioning Chris Traeger, Lowe’s character on comedy Parks and Recreation, was especially astute. Traeger was an exceptionally positive, upbeat person who would conceivably prefer not to take sides at a football game, rooting instead for a good, well-played game in which all involved had fun. (He was also a health nut, so Lowe not being seen with a hot dog or nachos helps the reference.)

Also, the word “literally” is literally a prominent part of his vocabulary.

Whether the Traeger-like behavior occurred to him naturally or he noticed the reference among the social media pile-on that followed his appearance on Fox’s telecast, Lowe embraced the ridicule and got into character with arguably (literally?) the best response possible:

”I LITERALLY love football! And teams. Every one of them! They are all wonderful! Go teams!”
-Chris Traeger pic.twitter.com/u9y6B4EkE6

Indianapolis Colts fans might feel a bit jilted, however, since Traeger is buddies with team owner Jim Irsay.

It’s always fun when a celebrity doesn’t take himself (or herself) too seriously. Lowe was at a football game, likely there only to promote his new TV show. (Unless he used his Fox connections to score tickets to the game.) No need to leave the sense of humor at home.

Did Lowe realize how it might look to wear a hat with the NFL logo on it? Maybe. Was he being a good company man, swimming with the current of corporate synergy that carried him to the Packers-49ers game? Lowe surely knows how this business works. Hey, at least he didn’t wear a hat with the 9-1-1: Lone Star logo on it.

Most importantly, Lowe and his cap provided some laughs that fans could share with each other on Twitter. At its best, social media provides the shared experience of watching a game with friends and contemporaries, much like we used to (and still do) when inviting people over to enjoy some football.

Maybe next time, Lowe can wear a t-shirt with one of Traeger’s most memorable lines from Parks and Recreation. (There’s no way I could write a post about Chris Traeger without including this clip. How many opportunities will present themselves?)

Probably good advice to follow if you’re actually attending an NFL game with thousands of fellow fans. It’s OK if you’re watching at home, though. Chris Traeger would approve you following your body’s natural functions.