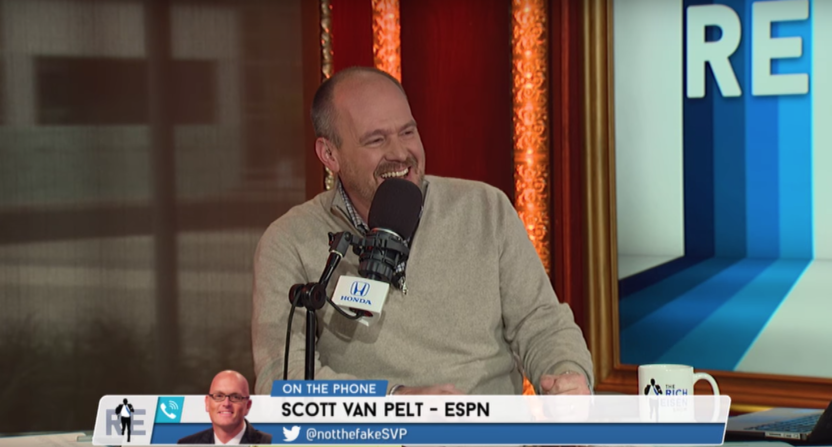 On Tuesday, after long-winded and large-muscled referee Ed Hochuli announced his retirement from the NFL, the Rich Eisen Show produced a so-called “retirement letter,” ostensibly from Hochuli, which it read on air and tweeted out to more than 50,000 followers.

In the letter, “Hochuli” wrote of “combining my favorite sport with my other favorite endeavor: explaining things in three long sentences that can really be explained in one short one” and building up lactic acid through a “vigorous regimen of stretching.” The whole thing was clearly a gag, but not everyone picked up on the joke. That night, Scott Van Pelt delivered a tribute to Hochuli on SportsCenter in which he twice quoted from Eisen’s fake letter, thinking it was real.

That brings us to Wednesday, when Eisen invited Van Pelt onto his show to rib him about the mistake and offer a half-hearted apology. Here’s the clip:

Here was how Van Pelt explained to Eisen falling for the fake letter:

In real time, Ed’s the kind of guy who seems to be self-aware enough that he could have penned this as a goof. And when it was brought up to me in our meeting, ‘Hey, did you see the letter Hochuli wrote?’ I thought, ‘Well that’s funny.’ And then later as I’m trying to write this script, I’m not finding it anywhere on Google searches or whatever … and then the producer’s says, ‘Oh it’s on Eisen’s feed,’ so I read your feed, I see the quotes that work and I just slam it in there and read it on television. Fake news. Fake news!

Soon after, Van Pelt said he was “mortified” by the mistake, causing Eisen to stop cackling and sincerely apologize for the mix-up. Van Pelt distributed some blame to Eisen for presenting the letter as if it were real while accepting the rest of the blame over his poor vetting.

Here’s the tweet from the show that tripped up Van Pelt. The replies are about 50-50 in terms of picking up on the joke.

By this point, you’d think everyone had learned: Sarcasm on the internet never ends well. Let this be yet another lesson.