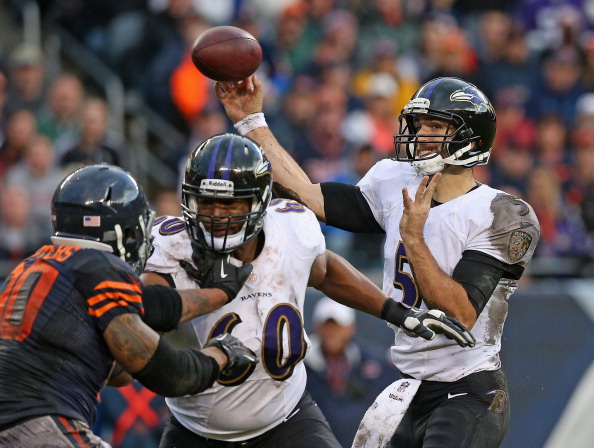 The already lengthy book on public relations disasters involving the Baltimore Ravens got another chapter Wednesday afternoon, thanks to a story on the team’s official website.

The team elected to release veteran left tackle Eugene Monroe on Wednesday, and the team website, which fashions its coverage similar to an independent agency, wrote up a story on the roster move.

The story begins innocuously enough, with the author laying out the case for Monroe’s departure for football-related reasons. Monroe was set to make a lot of money; he had trouble staying healthy; the move saves cap space; the team just spent the No. 6 overall selection on a tackle, and on and on. For the first half of the story it seemed like Monroe’s release was just a simple business decision.

However, Monroe recently made headlines for his marijuana advocacy as an alternative to opioid pain medicines that are prevalent throughout the league. Most PR teams would leave this fact out when addressing why Monroe was released, whether it was a contributing factor or not. But not the Ravens. No, the Ravens not only mentioned Monroe’s stance on marijuana, they made it perfectly clear this stance was not shared by the team.

Monroe had surgery to repair a torn labrum (shoulder) this offseason, and used the time off to become the first active NFL player to openly campaign for the use of medical marijuana. The Ravens did not rally behind the cause.

“I promise you, he does not speak for the organization,” Head Coach John Harbaugh said this offseason.

Not only has the tide turned against recreational marijuana use, marijuana use for medical reasons — as Monroe was suggesting — is already legal in 25 states,  including Maryland. The substance is still banned in the NFL, but it is pretty amazing to see an NFL team share its draconian stance on marijuana so openly. And even more incredibly, that it was a contributing factor to releasing a player for suggesting pot be reevaluated by the league.

The Ravens are a league leader in PR snafus at this point. There was the famous mishandling of nearly everything in the aftermath of the Ray Rice’s punch, but the team also exposed its own rookie hazing, and even retweeted a post mocking the NFL’s handling of the concussion crisis.

This is not live tweeting the Ray Rice press conference, but it certainly did not help the Ravens’ already damaged public image.

Ben is a recent graduate of Butler University where he served as Managing Editor and Co-Editor-in-Chief for the Butler Collegian. He currently resides in Indianapolis.