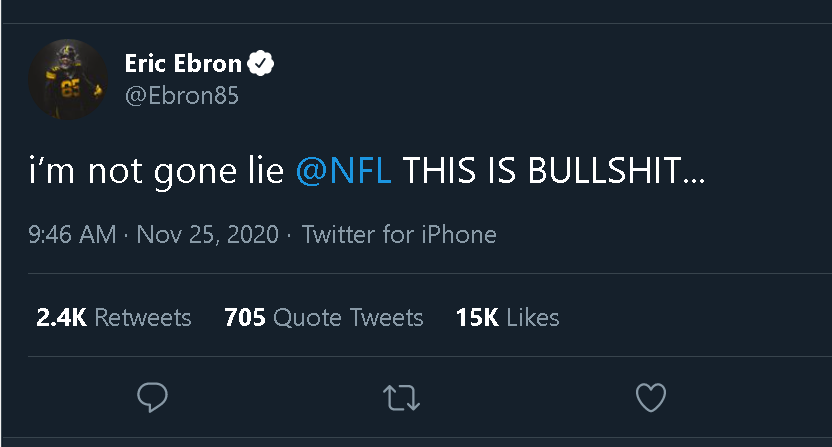 The NFL’s primetime game Thanksgiving night is no more. NBC was set to televise the 6-4 Baltimore Ravens at the 10-0 Pittsburgh Steelers at 8:20 p.m. Eastern, but after a COVID-19 outbreak impacted the Ravens, the league announced Wednesday that that game has now been moved to Sunday.

Update: On Friday, the NFL announced that this game has now been moved to Tuesday following further positive tests, including one from Baltimore QB Lamar Jackson. The league also said that the Cowboys-Ravens game previously set for next Thursday will be moved to the following Monday if Ravens-Steelers is played Tuesday:

As of Tuesday, the Ravens had seen at least 10 positive tests since Sunday night, as per Jeff Zrebiec of The Athletic. Those include running backs Mark Ingram and J.K. Dobbins. But they also had quarterback Trace McSorley, outside linebacker Pernell McPhee, nose tackle Brandon Williams and cornerback Iman Marshall on the reserve/COVID-19 list, which can be about either tests or close contact. And Garafolo added that they were set to rule out other players thanks to close contact:

Let me rephrase for clarity here. The league did not postpone the game due to the #Ravens' being shorthanded. The decision was made because there are a bunch of #Ravens who are close contacts. They want a few more days of tests to ensure the spread is contained. https://t.co/Zh1F7fcVjP

Shifting this game is a loss for the NFL and for NBC. That was the most compelling Thanksgiving matchup this year; the others involve the 3-7 Houston Texans taking on the 4-6 Detroit Lions and the 3-7 Washington Football Team battling the 3-7 Dallas Cowboys for NFC Least supremacy. And Steelers-Ravens is often a big draw, and was likely to draw even better with the backdrop of the Steelers being undefeated so far. Interestingly enough, several Steelers players posted on Twitter that they’re upset about the move, with receiver JuJu Smith-Schuster noting that this comes after the Steelers already had a game rescheduled for their bye week (their clash with the Titans, originally set for early October but moved to Oct. 25 after the Titans had a COVID-19 outbreak):

First the NFL takes away our bye week because another team can’t get their Covid situation together, now they take away our Thanksgiving primetime game for the same reason. Smh.

i’m not gone lie @NFL THIS IS BULLSHIT…

It’s interesting to see so many players upset about this.