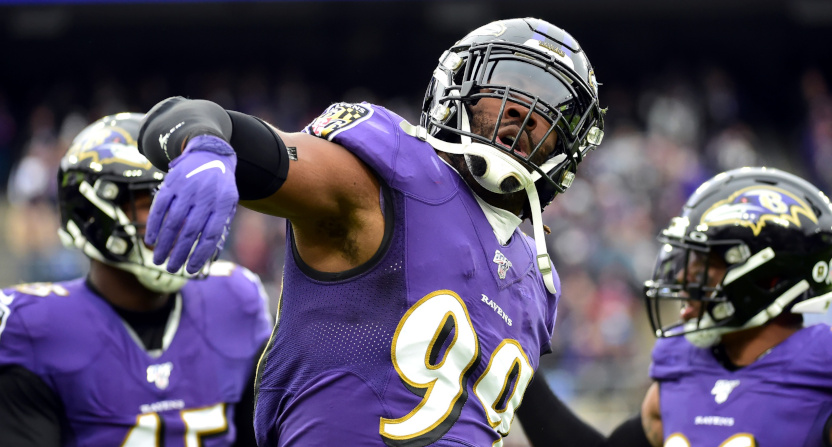 There have been several unusual responses lately from athletes, teams and league executives to broadcasters and other media members who cover them. The latest comes from Baltimore Ravens’ linebacker Matthew Judon, who went after ESPN Ravens reporter Jamison Hensley on Twitter and Instagram over Hensley’s report (part of a larger piece Tuesday about Baltimore’s options with pass-rushers like Judon and Yannick Ngakoue, possibly including a franchise tag or letting them walk in free agency) that the team had previously offered Judon (seen above during a November 2019 game) a long-term contract with an estimated average annual value of $16.5 million. Complaints over reporting around contract offers aren’t new, but Judon’s complaints were in much stronger terms than often seen, including referencing Hensley’s “lying butt,” saying “Bro, you have to stop lying,” and then even eventually dropping a threat of “I’m waiting on your ESPN sourced apology or I’m leaking these photos I got with you in the strip club.” Here’s that exchange:

Hi Matthew. I was told that Ravens offered you a deal similar to Za’Darius’ ($16.5M per season) earlier this season and it was declined. If you have a comment, I would certainly add that to the piece. I’ve always been fair with you. Thanks and welcome back to Twitter.

I will definitely add your response to the piece. If you ever have an issue with any of my reporting, I would be happy to listen and explain. I’ve always aimed to cover you in a respectful manner in your five years in Baltimore. Hope you have a great offseason. 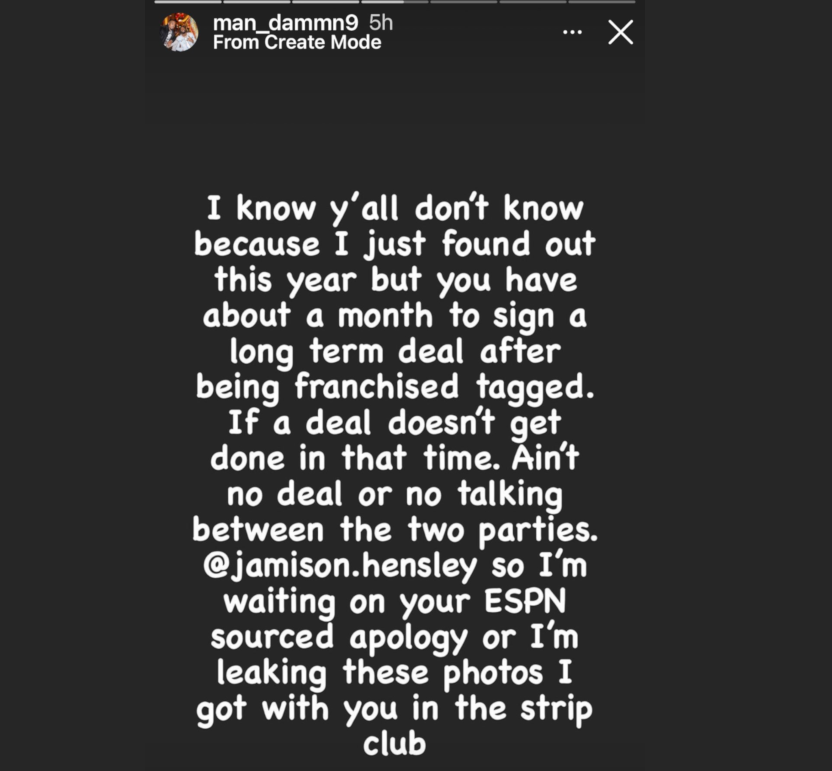 Update, 2/25: That post is no longer on Judon’s Instagram page. It’s unclear if he deleted it or if it was a story that expired. ESPN also sent along this statement Thursday:

“We stand by Jamison Hensley’s reporting, and Hensley added Matt Judon’s perspective within the story. Regardless, the since-deleted personal attacks toward him were completely uncalled for.”

However, Judon’s tweets remain up. The rest of our initial post from Wednesday follows:

Here’s the specific language of Hensley’s story on Judon, with the update that Judon disputes the report:

Judon and Ngakoue are the Ravens’ most high-profile free agents, but it would prove costly to tag Judon ($20.17 million) or Ngakoue ($15.893 million). Baltimore is projected to have $18.064 million in cap space, according to Over The Cap.

Last year, Judon fell short of expectations after getting the franchise tag, recording six sacks and 21 quarterback hits. According to a source, the Ravens tried to strike a long-term deal with Judon this summer by offering him what Za’Darius Smith received in Green Bay (an average of $16.5 million) but he declined. Judon has disputed this report.

While Judon’s numbers won’t put him in the elite pass-rusher category (he’s never had double-digit sacks in a season), teammates suggest his value extends beyond statistics.

“He’s meant a lot to this defense,” cornerback Marlon Humphrey said. “I think anytime you see a play, you’re always going to see some guy running full speed giving his all with a lot of hustle. I think he’s been a big voice to the defense, for sure. [He’s] one of our top leaders. You think guys like him come around often, but I don’t think they do.”

Obviously, the most bizarre part of this story is the “I’m waiting on your ESPN sourced apology or I’m leaking these photos I got with you in the strip club” comment from Judon. Putting aside whether Judon’s complaints about Hensley’s reporting have merit for the moment, threatening to leak photos of him (and really, it’s unclear how that’s even much of a threat; who cares if Judon took a photo with Hensley in a strip club?) seems like a poor way to dispute a reported claim. If Judon had only put out a tweet saying he was never offered what Hensley reported he was offered, this would have been a much more normal reporting dispute. Even if he’d stuck with just the “lying butt,” that would have been extreme, but it wouldn’t have been unprecedented. But publicly threatening a reporter with the release of photos sure feels like a pretty significant line to cross.

Beyond that part of the story, another interesting element here is that unlike in many reporting disputes about contracts, there doesn’t seem to be a lot of wiggle room where both sides’ comments could be technically correct and the difference is just down to interpretation. While Hensley’s tweet in response to Judon says “similar to ZaDarius,” the actual language in the story is “offering him what Za’Darius Smith received in Green Bay (an average of $16.5 million).” That would seem to be something with a binary true-or-false answer; either the Ravens offered Judon a deal with an average annual value of $16.5 million or they did not. If it was “similar,” everyone could debate what’s actually similar, but the piece has a hard number.

And yes, there are all sorts of ways where one $16.5 million AAV NFL deal might be better than another one based on contract length, incentives and more. So the Ravens’ reported offer to Judon might not have been quite as strong overall as what Smith received from the Packers.  But that doesn’t matter for the purposes of Judon’s complaint here; either there was a $16.5 million AAV offer and Hensley is correct, or there was not and Judon is correct.

What’s also notable is that Judon’s complaint on Instagram says that Hensley’s report can’t be true because of the timing, claiming that a club offer could only come within “about a month” after a player signed a franchise tag. Judon signed that tag on May 28, two and a half months after the Ravens placed it on him. But the actual defining factor isn’t when the player signs, it’s a league-wide deadline for negotiations with franchise-tagged players. And as per Tadd Haislop’s 2020 franchise tag explainer at The Sporting News, the 2020 deadline was July 15. That’s a little more than the “about a month” Judon cited (but not dramatically so; it’s a month and a half), but the real key is that it would fall within the “this summer” in Hensley’s piece. (It’s not clear if the “this summer” was initially in that piece or if it was added as an update along with Judon’s disputing of the report, though; if the piece initially suggested more recent talks or didn’t provide a timeframe at all, Judon’s pushback here would seemingly make more sense.)

All in all, this seems like a rather absurd thing to have a giant controversy over, especially one that leads to threats of leaked photos. Of course players are often unhappy with team sources’ characterization of contract talks, and there’s sometimes good reason for that, particularly when it comes to language that is more nebulous. If Hensley’s piece had actually said “similar to Za’Darius Smith’s” contract for a contract that Judon and his agent didn’t find similar, that would be a fair debate to have (although it would work better without the threats). But Hensley’s piece has hard details ($16.5 million AAV, multiple years) of an offer that either happened or didn’t happen.

If that offer did happen, then Judon owes Hensley an apology for his complaints here. Even if he ultimately didn’t find the offer acceptable, and even if the specific terms made it worse than Smith’s deal, if there was a $16.5 million AAV multiple-year offer, then Hensley’s reporting is correct. But if Judon is correct and there was no actual offer, then there are big questions about Hensley’s source and his reporting here. So this will be an interesting one to follow.