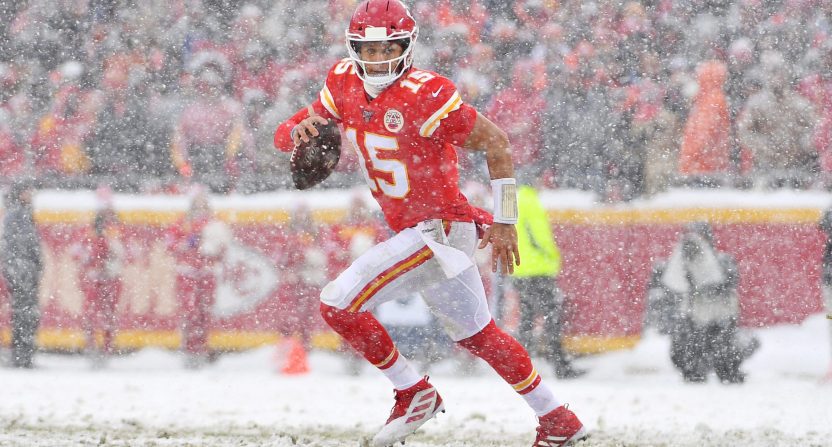 A lot of mystery still surrounds how the 2020 NFL schedule might play out due to the COVID-19 pandemic. But for now, we at least have a look at when all 256 games are supposed to be played.

This year’s schedule features 48 primetime games and 51 nationally-televised games, with seven more scheduled to be added on the final Sunday of the season and two December Saturdays. There’s also a chance that as many as eight Sunday night games will be flexed between Week 5 and Week 16.

But working only with what we know right now, we’ve gone ahead and ranked the 51 games you’re currently slated to have access to this year regardless of your cable package.

51. Falcons at Panthers (Oct. 29, FOX) — There aren’t any terrible games on the primetime schedule this year, but this is the worst of them. It’s just a pretty mundane divisional Thursday nighter between two teams that seem to underachieve every year.

50. Steelers at Bengals (Dec. 21, ESPN) — The Bengals should be better this year, but few expect them to be in contention in Week 15. Weird game for late-season Monday Night Football, because it can’t even be flexed.

49. Chargers at Raiders (Dec. 17, FOX) — I don’t think either team will be in contention when they meet in the final Thursday Night Football game of the year.

48. Patriots at Jets (Nov. 9, ESPN) — These rivals could at least be more closely matched this year, but it’s hard to trust the Jets and nobody knows what to expect from the Patriots. There’s a decent chance this won’t have major implications.

47. Bears at Rams (Oct. 26, ESPN) — Both teams took big steps back last year and endured tough offseasons. Not sure either will contend in 2020.

46. Vikings at Bears (Nov. 16, ESPN) — This could be big if the Bears bounce back after a rough year, but I’m not betting on that, and Minnesota arguably took a step backward this offseason as well.

45. Bears at Packers (Nov. 29, NBC) — Again, the Bears don’t do much for me. The Packers are more intriguing than Minnesota, but this also has a chance to be one-sided in Green Bay later in the year.

44. Colts at Titans (Nov. 12, FOX) — They both should be competitive, but neither is likely to be in the Super Bowl conversation. Decent-but-not-special TNF divisional matchup.

43. Titans at Broncos (Sept. 14, ESPN) — The Titans aren’t sexy. There’s a chance the Broncos will be, but that’s far from a guarantee too. At least this is early.

42. Broncos at Jets (Oct. 1, NFLN) — With Sam Darnold and all of that talent on both sides of the ball, the Jets could actually be a more intriguing draw early on than Tennessee. The key is that this is in Week 4.

41. Dolphins at Jaguars (Sept. 24, NFLN) — This one isn’t ranked at the bottom because there’s a chance it will mark Tua Tagovailoa’s national debut.

40. Redskins at Cowboys (Nov. 26, FOX) — NFC East battles simply can’t be ranked any lower than this, because the firework potential is so high. That said, the Redskins won’t be good and this could be one-sided this late in the year. Take your Thanksgiving nap in this spot.

39. Chiefs at Raiders (Nov. 22, NBC) — The blowout potential is high, but at least it’s in Las Vegas and the Chiefs are always a damn show.

38. Patriots at Rams (Dec. 10, FOX) — I know it’s a rematch of a really recent Super Bowl, but the luster has really come off both teams of late.

37. Ravens at Patriots (Nov. 15, NBC) — I wouldn’t be shocked if the Patriots were out of contention at this stage, but you just never know with Bill Belichick at the helm. Plus, these teams still have bad blood.

35. Titans at Packers (Dec. 27, NBC) — Both teams went to their respective conference championship games in 2020, but there’s not a lot of history between the two aside from the Matt LaFleur connection. Kind of a weird choice for Week 16 Sunday night.

34. Chargers at Saints (Oct. 12, ESPN) — Both teams are loaded with talent, and we could get a look at Justin Herbert. At least it’s early in the season, before the Bolts implode.

33. Texans at Lions (Nov. 26, CBS) — Deshaun Watson is one of the most entertaining players in the league, but the Lions are a wild card. If Matthew Stafford is healthy and Detroit is competitive, this is a great Thanksgiving matchup.

31. Broncos at Chiefs (Dec. 6, NBC) — I get the feeling the Broncos will hang in this year, so this could be an enticing December divisional matchup. The Chiefs are a huge draw regardless, but there’s also a chance it will be a blowout at Arrowhead.

30. Steelers at Giants (Sept. 14, ESPN) — There’s still a small chance Ben Roethlisberger won’t be ready to go for Pittsburgh’s season opener, and the Giants still might not be a good team. That said, Big Ben’s return would be fun, and this is always an interesting inter-conference battle between two popular teams.

29. Bills at 49ers (Dec. 6, ESPN) — The Bills should be fun this year and the 49ers are the faves in the NFC, but this could have high blowout potential in San Francisco.

27. Buccaneers at Giants (Nov. 2, ESPN) — Brady’s history with the Giants gives this an edge over Rams-Bucs and Bucs-Raiders.

26. Buccaneers at Bears (Oct. 8, FOX) — Even though I’m down on the Bucs, this matchup is early enough that Brady and Rob Gronkowski in Tampa will still be a huge novelty.

25. Giants at Eagles (Oct. 22, FOX) — It’s early enough that the Giants should still be hungry, and you can’t really go wrong with NFC East battles under those circumstances.

24. Falcons at Packers (Oct. 5, ESPN) — Neither team is overly trustworthy, but this is still Matt Ryan and Julio Jones vs. Aaron Rodgers and Davante Adams. Could mean a lot, too.

23. Bills at Patriots (Dec. 28, ESPN) — There’s a chance this could decide who win the AFC East, but there’s also a chance it won’t matter at all. Really tough to tell with these teams.

22. Bengals at Browns (Sept. 17, NFLN) — This is likely to be our first look at No. 1 overall pick Joe Burrow, and the Browns have at least become a hell of a draw.

21. Cowboys at Eagles (Nov. 1, NBC) — Both look like contenders, so this should be another spectacular NFC East Sunday nighter.

20. Steelers at Bills (Dec. 13, NBC) — You just know this one will have big playoff implications, and it should be close in Orchard Park. Always fun seeing the Bills in primetime at home.

18. Cowboys at Ravens (Dec. 3, FOX) — Two contenders who rarely meet, but bring a lot of intrigue to a home-stretch cross-conference Thursday nighter.

17. Cardinals at Seahawks (Nov. 19, FOX) — The Cardinals are the coolest new good team in football, this could have major implications, and Kyler Murray vs. Russell Wilson is just gold. It would be ranked higher, but there’s always a chance the Cards could disappoint.

16. Cardinals at Cowboys (Oct. 19, ESPN) — Cardinals hype machine on overdrive. If the novelty fades, it might not have totally gone away by now. Plus, the Cowboys are a slightly tougher opponent.

15. Saints at Raiders (Sept. 11, ESPN/ABC) — The Raiders open their brand-new stadium in Las Vegas in a game simulcast on ABC. Pretty cool, especially with an exciting opponent in town.

13. Vikings at Seahawks (Oct. 11, NBC) — These two always seem to play entertaining, important primetime games in Seattle. No reason this should be any different.

12. Chiefs at Bills (Oct. 15, FOX) — Speaking of hyped teams, the Bills look better after making the playoffs last year. At home, they could put up a fight against the always-entertaining Chiefs on TNF.

11. Seahawks at Eagles (Nov. 30, ESPN) — Two always-competitive and always-enticing, evenly-matched rivals battle as the stretch run gets underway. Hard to imagine this not being big.

10. Patriots at Seahawks (Sept. 20, NBC) — We don’t know what to expect from the Pats, but they should be very intriguing this early in the year. This will give a national audience a chance to gauge where they’re at sans Brady.

9. 49ers at Cowboys (Dec. 20, NBC) — Two great teams with great fanbases in a late-season matchup that should be close with Dallas at home. Could be a lot on the line here.

8. Ravens at Browns (Dec. 14, ESPN) — If the Browns finally live up to the talent on their roster, a home game against the defending division champions in December could be one of the most highly anticipated games of the year. What a potential Monday nighter in Week 14.

7. Packers at 49ers (Nov. 5, FOX) — A rematch of last year’s NFC title game at the scene of the crime for Green Bay. Rodgers will be thirsty, especially with all of the circumstances that have emerged in recent weeks.

6. Texans at Chiefs (Sept. 10, NBC) — I’m a bit underwhelmed by Houston as the foe for Kansas City’s primetime opener. Bill O’Brien is a joke and the Texans could be a mess in this spot sans DeAndre Hopkins. Still, Watson is Watson, and you can’t rank the NBC opener much lower than this.

5. Packers at Saints (Sept. 27, NBC) — Maybe the last time we see Rodgers and Drew Brees together on a football field. And their respective teams aren’t bad either.

4. Ravens at Steelers (Nov. 26, NBC) — If Big Ben can keep it together, this rivalry could be epic in 2020. Would make for a sweet Thanksgiving closer.

3. Vikings at Saints (Dec. 25, FOX) — The Christmas Day novelty earns this one extra points, but it’s also just a great matchup between exciting teams that have some bad blood.

2. Saints at Buccaneers (Nov. 8, NBC) — Maybe the last time we see Brady and Brees together on a football field. And it’s also a potentially crucial divisional matchup between two talented and fun teams.

1. Chiefs at Ravens (Sept. 28, ESPN) — These were the two best teams in the NFL last season, and we all wish this could have been the AFC Championship Game. Neither team is going anywhere, and this should be an incredible MNF battle between the league’s last two MVPs.

The film will be about Guthrie, who in the 70s faced opposition from many as she tried to become the first woman to qualify for the Indianapolis 500.

Buzzer previously secured the rights to live content from both the NHL and PGA Tour.

The film will be about Guthrie, who in the 70s faced opposition from many as she tried to become the first woman to qualify for the Indianapolis 500.

Buzzer previously secured the rights to live content from both the NHL and PGA Tour.