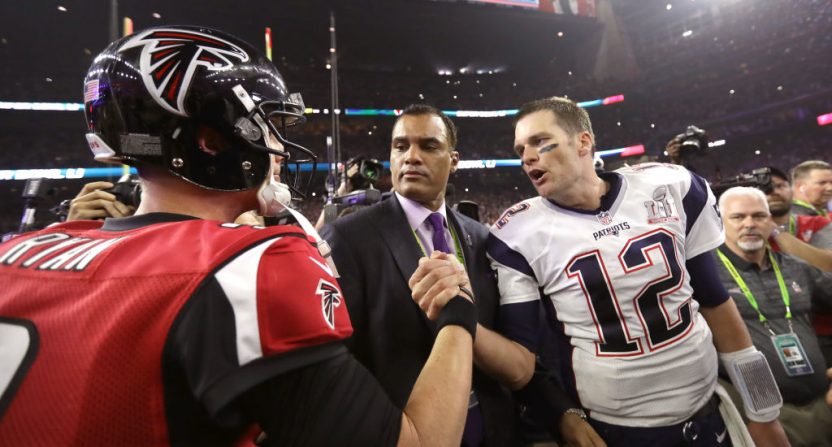 This year’s NFL schedule features 50 primetime games and 57 nationally-televised games, with one more scheduled to be added on the final Sunday of the season. There’s also a chance that as many as eight Sunday night games will be flexed between Week 5 and Week 16. But working only with what we know right now, we’ve gone ahead and ranked the 57 games you’re currently slated to have access to this year regardless of your cable package.

56. Bears at Lions (Dec. 16, NFLN): I honestly doubt this matters much for either team.

55. Steelers at Bengals (Dec. 4, ESPN): I don’t trust the sliding Bengals to stay competitive this long.

54. Chargers at Chiefs (Dec. 16, NFLN): Kansas City has won six straight meetings. This might not matter much for the Chargers and it’s in KC. Could be a snooze.

53. Vikings at Bears (Oct. 9, ESPN): It works on a Monday night because it’s a rivalry game and neither team will be toast this early, but there’s not a lot of sex appeal with either team.

52. Vikings at Packers (Dec. 23, NBC): Totally depends if this matters. Even so, it could be a one-sided Green Bay victory at home.

51. Texans at Bengals (Sept. 14, NFLN): On paper this looks like a nice matchup, but the Texans still don’t have a quarterback, the Bengals continue to decline and these teams always seem to play shoddy games against each other.

50. Texans at Ravens (Nov. 27, ESPN): Both teams should still be alive, but I don’t think either will be particularly fun to watch.

49. Rams at 49ers (Sept. 21, NFLN): I don’t mind an early-season national check-in on two rebuilding teams. This won’t move the needle in a major way, but it should be fun to see how both new-look franchises are doing in Week 3.

48. Dolphins at Ravens (Oct. 26, CBS): I’ve seen worse Thursday nighters, and this is a decent quarterback matchup with two potential contenders. But it’s not a blockbuster.

46. Bears at Packers (Sept. 28, CBS): This one’s sort of under the radar because Chicago might not be very good, but it’ll be new Bears quarterback Mike Glennon’s primetime debut. In Green Bay, that’s beautiful.

45. Chiefs at Texans (Oct. 8, NBC): This could feature great defense and playoff implications, but that doesn’t mean it’ll be entertaining for the first three quarters. Not an appointment game.

44. Eagles at Seahawks (Dec. 3, ESPN): By the time we reach December, this could be an awful game and a potential blowout for the home side. But for now, we’re giving the Eagles the benefit of the doubt. If things come together for them, this could have a lot of hype.

43. Vikings at Browns (Oct. 29, NFLN): This one gets extra points because it’ll be our first national look at the revamped Browns. In London, no less.

40. Redskins at Chiefs (Oct. 2, ESPN): An underrated battle between unstoppable force and immovable object. Not a ton on the line, but high entertainment value here.

39. Raiders at Eagles (Dec. 25, ESPN): Depends on if the Eagles can come through this season. If they can, this should be a fun late-season matchup across conferences.

38. Chargers at Broncos (Sept. 11, ESPN): In their first game as the Los Angeles Chargers, don’t be surprised if Philip Rivers and Co. put up a fight.

37. Saints at Vikings (Sept. 11, ESPN): The first part of a Week 1 MNF doubleheader pits a great offense against a great defense, with the added bonus that Adrian Peterson will likely be playing for New Orleans.

34. Lions at Giants (Sept. 18, ESPN): Both were playoff teams last year, and Matthew Stafford almost always keeps things interesting. Get the feeling this’ll go down to the wire.

33. Redskins at Eagles (Oct. 23, ESPN): This could be another NFC East thriller with playoff implications.

31. Giants at Broncos (Oct. 15, NBC): Odell Beckham Jr. against the best defense in the world. If the Giants can keep this close, it could be a classic.

30. Eagles at Panthers (Oct. 12, CBS): Cam Newton is a draw and the Eagles should be fun this season, now that they’ve given Carson Wentz some more weapons for his sophomore season.

29. Cowboys at Cardinals (Sept. 24, ESPN): Dallas is always a draw, and an early-season road game against a strong defensive team should be competitive.

28. Raiders at Dolphins (Nov. 5, NBC): Two 2016 playoff teams trying to take the next step. That makes for a nice midseason game with potential playoff implications.

27. Lions at Packers (Nov. 6, ESPN): Their last four meetings have been one-score games.

26. Seahawks at Cardinals (Nov. 9, NBC): This sort of depends on if the Cards show up in 2017, but these division rivals typically play close games featuring great defense.

25. Titans at Steelers (Nov. 16, NBC): Are the Titans for real? If so, a road matchup with Ben Roethlisberger and the Steelers with potential playoff implications will be glorious.

24. Broncos at Chiefs (Oct. 30, ESPN): The Chiefs have won three straight in the rivalry, including a thriller last November.

22. Patriots at Dolphins (Dec. 11, ESPN): We’ll see if Miami can put up a fight at home in an important late-season division game. If this actually matters, it’ll be huge.

21. Raiders at Redskins (Sept. 24, NBC): Two high-flying offenses in what should be a close cross-conference matchup.

20. Chargers at Cowboys (Nov. 23, CBS): This might be Tony Romo’s first Cowboys game in the CBS booth. It could also be an entertaining matchup.

19. Ravens at Steelers (Dec. 10, NBC): A rivalry is a rivalry, and these guys continue to play final, close games.

18. Steelers at Texans (Dec. 25, NBC): One of the AFC’s most impressive offenses against one of its best defenses. And it’ll likely matter to both teams.

17. Patriots at Buccaneers (Oct. 5, CBS): Jameis Winston and the improving Bucs at home against the reigning Super Bowl champions. Hard not to love this for a Thursday night.

14. Redskins at Cowboys (Nov. 30, NBC): I really think all of these NFC East games will matter greatly, so suck it up.

12. Colts at Seahawks (Oct. 1, NBC): Andrew Luck vs. Russell Wilson before their respective offensive lines have caused both to become injured and/or ineffective. That’s gold on a Sunday night.

11. Patriots at Broncos (Nov. 12, NBC): Even with Peyton Manning gone, this rivalry remains strong. Both should be Super Bowl contenders, and Denver should keep this close at home.

10. Saints at Falcons (Dec. 7, NBC): I expect New Orleans to be a lot better in 2017, and the Falcons will have a target on their back. This could be a high-scoring nail-biter with major implications. The Saints lost both meetings last season despite scoring 64 combined points in the two games.

9. Falcons at Buccaneers (Dec. 18, ESPN): But I think Tampa will challenge the Falcons to more of a degree than New Orleans. This could even decide the division.

7. Colts at Titans (Oct. 16, ESPN): Andrew Luck vs. Marcus Mariota might become a hell of a quarterback rivalry. Both AFC South squads have high expectations with their franchise quarterbacks, and this should set the tone in that division.

6. Chiefs at Raiders (Oct. 19, CBS): The Chiefs beat the Raiders twice last season. They’re both expected to be contenders again in 2017.

5. Giants at Cowboys (Sept. 10, NBC): Bitter rivals and 2016 playoff teams, both of whom should be in the hunt in 2017. The Giants gave Dallas two of its three losses last season, so this is a hell of a way to kick off the Sunday night sked.

4. Cowboys at Raiders (Dec. 17, NBC): Two of the league’s most exciting teams from 2016. And both should be just as competitive and entertaining in 2017. This is a primo December primetime matchup, even as a cross-conference game. What kind of home-field advantage will the soon-to-be-Las Vegas Raiders have?

3. Falcons at Seahawks (Nov. 20, ESPN): They played a thriller last October and met again in the playoffs, with Atlanta winning handily. This is an emerging rivalry, and this game could have major implications for both teams entering the home stretch.

2. Packers at Falcons (Sept. 17, NBC): The Falcons beat the Packers in a 33-32 classic last season and then took care of them again at home in the playoffs. This should be another shootout with potential playoff implications down the line.