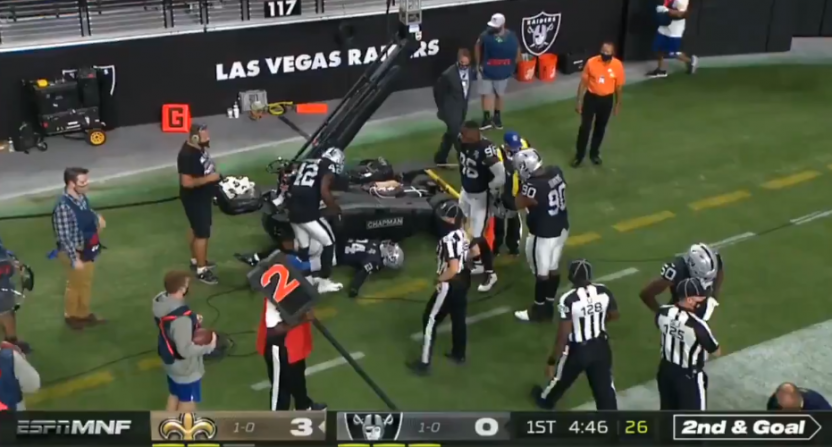 Early in this week’s Monday Night Football game between the New Orleans Saints and Las Vegas Raiders, Raiders safety Jonathan Abram crashed into an ESPN camera cart after trying to tackle Saints running back Alvin Kamara. Afterward, he lay motionless on the ground for a solid minute.

Scary scene as #Raiders safety Jonathan Abram collides with a steel cart on the sideline. pic.twitter.com/IU1nBxa3l9

Almost immediately people watching the game wondered why the cart was so close to the field of play and whether or not it needed to be. Abram eventually popped up and sprinted to his sideline, even returning to the game, leading many to believe that it was ultimately not much harm done.

Turns out, that was very much not the case. Per NFL.com’s Tom Pelissero & Ian Rapoport, Abram suffered a Grade 2 AC joint sprain, and a small piece of his collarbone was chipped (yikes). That collarbone chip led to internal bleeding. All of this is to say that the TV cart’s close proximity to the field ended up majorly injuring and potentially risking the life of an NFL player, calling into question just exactly what safety measure had been put into place by ESPN and the league.

Pelissero and Rapoport reached out to both but neither would provide any comment. However, they do note that sources have told them both the NFL and ESPN have been discussing what to do about the TV carts in the future, as well as whether or not they need to limit the number of people on the sidelines during a game. Pelissero and Rapoport also note that this was the first game played in Allegiant Stadium and it was considered normal for the league to review their game procedures after such events.

Technically the cart and its operator were where they were supposed to be, a dashed yellow line that broadcasting equipment needs to remain behind. However, that clearly wasn’t far enough away from the field of play as Abram tumbled into it rather easily following his attempted tackle on Kamara.

They note that were this a “normal” NFL game in the pre-pandemic days, it’s likely that the cart would have been further back to make room for cheerleaders, photographers, and other personnel usually found on the sidelines during a game. If that had been the case, he might have tumbled into some of them instead of the cart.

Abram’s agent Trey Robinson has called on the NFL to require TV carts like the one Abrams ran into being padded or relocated. He told the reporters that “players are even more likely to make impact with these carts this season because of the lack of people on the sidelines due to COVID restrictions.”

Abram appears as though he will play through the injury on Sunday, which bodes well. But unless the NFL and it’s broadcasting partners don’t put player safety above all else, this is something that will definitely happen again.