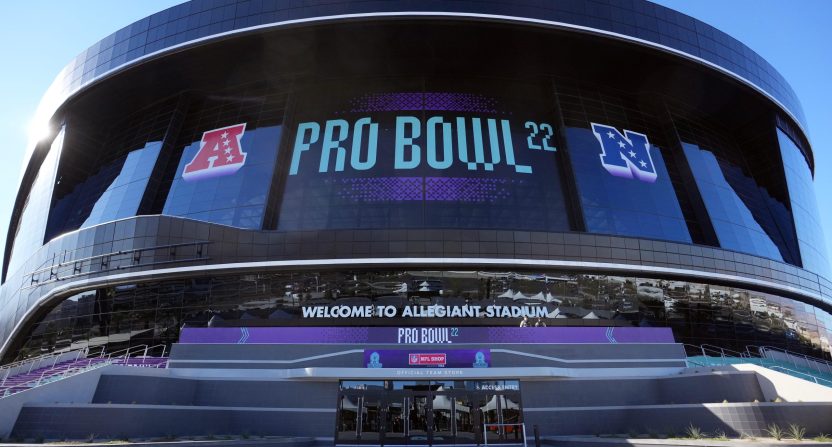 There’s long been a debate over the utility of the NFL’s Pro Bowl in its current form, and that intensified earlier this year when commissioner Roger Goodell said the game “doesn’t work” and “we need to find another way to celebrate the players.” There have long been musings about adapting the Pro Bowl to something else to lower the risk of injuries in particular, but none really took hold. This time around, though, the league has gone through with a dramatic change.

As Rob Maiddi of The Associated Press reported Monday, the traditional game will be pulled. It will be replaced with a “The Pro Bowl Games” week of skills competitions capped off with a flag football game on the Sunday, which will take place on Feb. 5, 2023 at Las Vegas’ Alliegiant Stadium this year. And Peyton Manning and Omaha Productions are involved. Here’s more on that from Maiddi’s story:

Peyton Manning and his Omaha Productions company will help shape programming and promote the event’s content throughout the week. Manning, a 14-time Pro Bowl pick during his Hall of Fame career, will provide his perspective and will also be a part of the coaching staff for flag game.

“The Pro Bowl is something that we’ve been looking at for a while, really continuing to evolve,” NFL executive Peter O’Reilly told The Associated Press. “Coming out of last year’s game, we really made the decision based on a lot of internal conversations, getting feedback from GMs and coaches, getting a lot of feedback from players. We think there’s a real opportunity to do something wholly different here and move away from the traditional tackle football game. We decided the goal is to celebrate 88 of the biggest stars in the NFL in a really positive, fun, yet competitive way.

“The feedback very directly from guys who had been in the Pro Bowl recently was to keep the construct of the week, make sure you’re having that multi-day element. It was overwhelmingly positive both from players as well as from clubs.”

The Pro Bowl had been around since 1951. It was first in Los Angeles through 1971, then moved between cities from 1972-79, then was in Hawaii from 1980-2009, and then has returned to rotating locations since. In 2010, it began to be played the week ahead of the Super Bowl rather than the week after. In 2021, following the pandemic-impacted 2020 season, the event was cancelled and replaced with a highlights and interviews package spotlighting the year’s Pro Bowlers. But the game went back to normal this February, and was played in Vegas on Feb. 6 (as seen above). That game only drew 6.7 million viewers across ABC, ESPN and DisneyXD, the lowest Pro Bowl audience since 2006, which likely helped add fuel to the fire to change the format.

So it’s understandable why the league kept plugging along with the Pro Bowl despite the criticism. But there’s been movement towards a big change for a while, including with Goodell saying in 2012 that “If we cannot accomplish that kind of standard (of high play), I am inclined to not play it.”  It’s interesting that they’re now actually making a big change, and this year’s particular declining ratings may have provided the impetus needed to get over the hump.

The actual replacement here is notable too, especially with the flag football game. The NFL has been doing a lot on the flag football front recently, including partnering with the International Federation of Flag Football to have that sport at this summer’s World Games in Birmingham, and pushing towards getting flag football into the 2028 Summer Olympics in Los Angeles. We’ll see what this new “Pro Bowl Games” format looks like, what kind of broadcasting arrangements and viewership it winds up with, and if other leagues contemplate changes to their own All-Star Games in the near future.