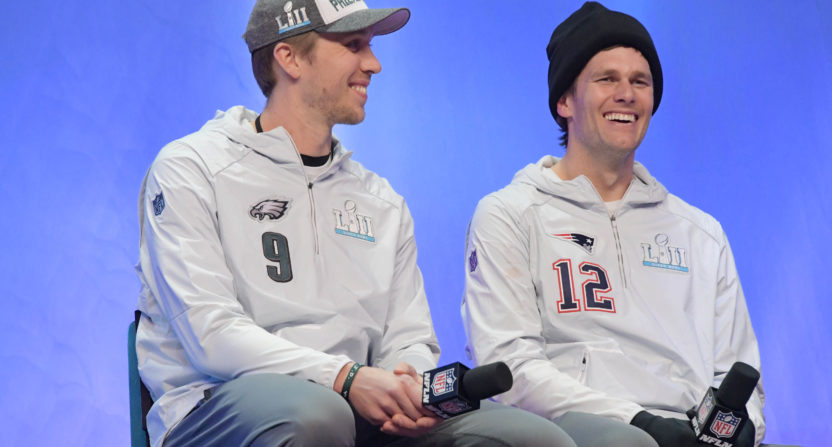 In the 10-year period from 2006-2015, the Super Bowl saw a remarkable amount of viewership growth.

But beginning in 2006, Super Bowl viewership began to increase exponentially with each passing year as one new record after another was set. Seven consecutive Super Bowls and nine out of 10 saw viewership growth. The only game to see a dip in ratings from the year prior was the Ravens-49ers clash in Super Bowl XLVII in 2013, although it had the dubious distinction of also featuring a lengthy power outage.

Given the trend in Super Bowl ratings and the trend in NFL ratings for the 2017 season, the question isn’t just whether or not Super Bowl LII viewership numbers will decline again… but by how much. And there are less than encouraging signs for the NFL that the drop could be significant.

NFL ratings coming back slightly to earth from their stratospheric heights has been a huge story in sports media for the past 12 months. And every step of the way this season, the league has had to deal with headlines noting its decline in viewership from past seasons. That was once again evident on Championship Sunday when ratings were down once again and the Eagles’ blowout over the Vikings was the least-watched NFC title game since 2009.

The Super Bowl is still the definitive cultural event in American television, but this year’s game has a remarkable lack of buzz that’s been noted by just about everybody covering the game. And why wouldn’t it?

Think about it. We’ve literally covered every single piece of ground that we can with the story of the New England Patriots dynasty. We’ve seen Brady and Belichick play the role of inspiring underdogs when they toppled the Greatest Show on Turf all the way back in 2002. We’ve seen them fall short of making history in going undefeated. We’ve seen them make history by winning their fifth Super Bowl together. We’ve seen them win with last second field goals, goalline interceptions, and record comebacks. We’ve seen them endure not one but two scandals that rose to the level of earning a “-Gate” suffix. We. Have. Seen. It. All.

For the super, super casual fan that the Super Bowl brings in, what’s the upside to watching the Patriots again? Where is there any real interest? It’s not like that ESPN.com story of castle intrigue between Brady, Belichick, and Robert Kraft is going to captivate those viewers. Nor is the condition of Brady’s injured hand.

On the other side of the ball, the Eagles led by Nick Foles may carry a huge market from Philadelphia into the game, but the Super Bowl has never been dependent on market size for viewership. Has the country caught on to this story in any discernible way? It’s tough to say at this point. Perhaps if the Vikings had won the NFC and been the first team to host the Super Bowl, that storyline could add an additional boost in intrigue.

If New England’s record comeback and the first-ever overtime in Super Bowl history couldn’t even salvage an upward ratings turn from the previous year, then what could possibly do so this year? It could very well turn out that much like recent years when Katy Perry and Lady Gaga starred that the halftime show featuring Justin Timberlake could draw a higher audience than the rest of the game itself.

So where might the viewership number land? If the decline matches the regular season numbers, falling upwards of 10%, we could see the game threaten to fall back below the 100 million viewer threshold. But with the interest in the commercials and halftime and the cultural significance of the Super Bowl, it’s tough to see that big of a drop.

However, it is realistic to expect that the game could go back below 110 viewers and perhaps all the way back to pre-2010 levels (106 million or lower), especially if the game isn’t close. If Super Bowl LII does fall in the 105-106 million viewer range, it would be a statistically significant dip yet again for the NFL. But the league could take heart in knowing it would still be in the top ten for all-time viewership numbers in American history.