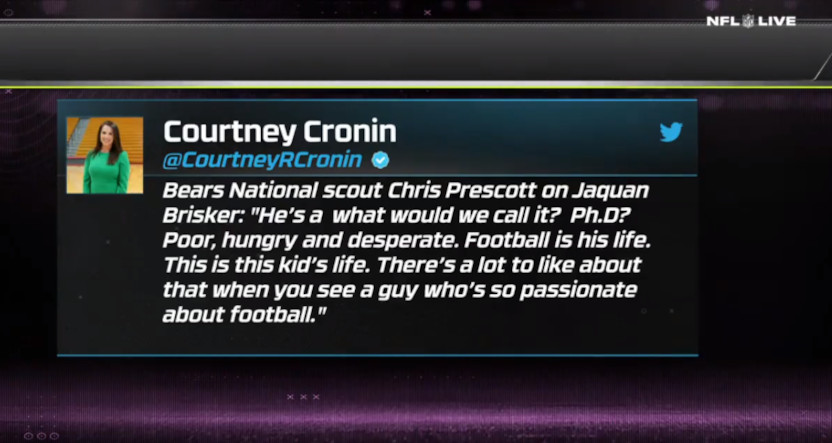 The NFL Draft process is infamous for problematic comments from scouts and other front office figures, often made anonymously. What’s notable about the most recent story there is that it came from comments made by a named scout, and that the scout in question, Chris Prescott, is no longer employed by the team he was with when he said this (the Chicago Bears, where he was a national scout).

That is not necessarily linked to these comments: the Bears have a new GM, Ryan Poles, and many teams even with GM carryover make front office changes following the draft, and Prescott wasn’t the only figure let go there. But it is interesting that Prescott is no longer in a NFL role days after his “poor, hungry, and desperate” comments on Chicago’s second-round pick Jaquan Brisker drew massive national backlash. Here are those comments, via ESPN’s Courtney R. Cronin:

Bears National scout Chris Prescott on Jaquan Brisker: "He’s a – what would we call it? – Ph.D? Poor, hungry and desperate. Football is his life. This is this kid’s life. There’s a lot to like about that when you see a guy who’s so passionate about football."

That immediately took some criticism, and Cronin did offer a later follow-up with some further context from Prescott:

This is a quote about Brisker's football playing mentality. Prescott was asked about what he took away from spending time w/ Brisker – said "it's how he communicates … you feel a tough, hard-nosed kid" before talking about his mentality below. https://t.co/fcEj49asRh

But that didn’t stop the criticism. And some of the backlash there came from ESPN’s Mina Kimes Monday on NFL Live, which started with her discussing New York Giants’ draft pick Kayvon Thibodeaux’s comments on things he heard during the draft process, then went into the larger context of this, and then turned to Prescott’s comments on Brisker:

When we reduce black prospects’ stories of adversity to traits like 40 times, we reduce them as human beings.

Some thoughts on the comments from a Bears scout on Jaquan Brisker this weekend, and a problem that continues to persist in draft commentary: pic.twitter.com/zQSCVhp5L9

A particularly notable part of Kimes’ comments starts at 0:37: “You hear that and you think, ‘Man, if that’s what they’re saying in public, what are they saying behind closed doors?’ It’s amazing that Jaquan Brisker has overcome adversity, and that should be championed, but to reduce his story to a draft attribute like a 40 time is to reduce who he is as a human being. This is something I think we’ve all been complicit in, including the media in our word choice and our presentation of stories, but it’s 2022, and by now, we should really all know better.”

It’s notable that Kimes addresses the media’s role with narratives around prospects, as that’s certainly part of the situation as well. And Kimes’ employer is one outlet that’s taken a lot of criticism for some of the particular ways they’ve covered players dealing with adversity in the past, including around the draft. They’re not the only one: NFL Network has taken criticism here too, as have print and radio outlets. And those stories aren’t necessarily going quite as far as the “PHD” comments here; most of them are not saying the player is valuable specifically because of the adversity they’ve overcome. But it’s worth talking about media coverage of the draft in this wider discussion.

Beyond that, though, the comments that Prescott made do particularly stand out for how blatantly they imply that a player’s early-life challenges are seen as an asset by a NFL team. And that’s drawn some further national commentary. Another notable piece there comes from Mike Freeman of USA Today, who discussed it Tuesday in the light of Prescott being no longer with the Bears:

Anyone who speaks and thinks this way shouldn’t be part of a 21st century NFL franchise. Expressing a sort of glee about a player being poor, hungry and desperate is quite the take. It’s a line you’d expect to hear from Marty and Wendy Byrde in “Ozark.”

Prescott made these remarks during the draft. Brandon Faber, vice president of communications for the Bears, told USA TODAY Sports on Monday that Prescott is no longer with the team. He said he could not provide information on whether Prescott was let go as part of the normal post-draft turnover process in the scouting department that is common with many teams, or whether Prescott’s dismissal was due to his comments.

But whatever the reasons, in a strange way, we should be grateful for Prescott. He pulled the curtain back and showed what some in the league truly think about players.

There’s still a significant swath of the league that sees players as cattle, or worse, as things. What I’m about to say isn’t specifically about Prescott. It’s more of a general statement. Parts of the NFL see players as things that may have some elements of humanity, but not quite; somewhere between a robot and a shell of a man.

The Black players are viewed as even less than that. There’s almost an exponential downgrading of their humanity.

An important part of the remarks from both Freeman and Kimes is that they’re spotlighting not just Prescott’s particular comments, but rather the wider NFL issues here. Many have noted that Prescott’s comments here suggesting adversity makes a player more valuable appear to be far from unusual in NFL personnel departments. In fact, the Thibodeaux situation (with teams raising concerns about his interests beyond football) is in some ways the inverse of this, and is something we’ve also seen a whole lot over the years. If Brisker’s specific passion for football was a motivating factor for the Bears’ selection, that’s one thing, but that doesn’t mean that that passion comes specifically because of his economic background, or that players from wealthier backgrounds aren’t passionate about the game.

It’s perhaps somewhat understandable why front office personnel have an asset-focused view of players. Their own jobs tend to depend specifically on how the player performs for that team, not on whether they do good community work or anything else. But Freeman’s point here about “elements of humanity, but not quite” is valuable. It would be better if everyone involved, from media to front office personnel, considered prospects’ full humanity at all times, and did so beyond just their specific on-field value.