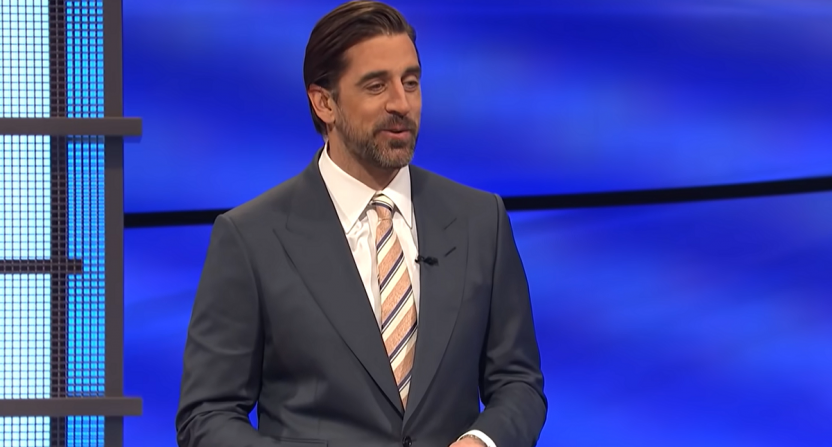 Over the past few months Aaron Rodgers has seemingly been everywhere (except for Green Bay team facilities or workouts.)

From popping up on Kenny Mayne’s last SportsCenter to being announced as one of the competitors in this summer’s version of The Match (and unwittingly becoming part of the Brooks Koepka-Bryson DeChambeau feud.) Perhaps most notably, though, Rodgers spent two weeks as a guest host on Jeopardy!, taping his stint shortly after the NFL season wrapped up.

Rodgers earned good reviews for his work when his episodes aired in April, to the point that many wondered if he’d consider the job on a full-time basis. Rodgers himself seemed open to the idea, noting that the shooting schedule was such that he could possibly find a way to do it while still playing out his football career, whether that’s in Green Bay or elsewhere.

Now that Jeopardy! has cycled through the first batch of hosts, there’s a poll that has Rodgers behind only Jeopardy! legend Ken Jennings when it comes to which initial guest host should replace Trebek. (Inasmuch as anyone can replace him.)

These have functioned as high-profile auditions for the guest hosts, and longtime Jeopardy! viewers are starting to pick favorites. According to a recent CivicScience study, Jeopardy! fans are most enthusiastic about Jeopardy! Greatest of All Time winner Ken Jennings taking over for Trebek (22%), but surprise contender Aaron Rodgers is polling right behind him (16%) — and significantly ahead of the other guest hosts. Jennings, the first and longest-tenured guest host, has long been considered a shoo-in for the job, but he might have some competition.

In what could be an appealing factor for the show, Rodgers performed the best among the youngest demographic:

Rodgers, who might not be the Green Bay Packers’ quarterback for much longer, is the top pick for viewers in the 18-to-24 age bracket, but Jennings bests him in every other age bracket.

Among live TV viewers, Jennings and Rodgers are in a dead-heat, with Jennings getting the edge. Rodgers bests him among viewers who primarily stream, which aligns with his popularity among younger fans. The distribution is a bit more evenly spread out with viewers who record the show and watch later – presumably some of the most devoted daily viewers – with even Richards, Buzzy Cohen, and Bill Whitaker outpacing their popularity among the Gen Pop.

Rodgers really did speak highly of the experience, and the producers spoke equally highly of his prep work and commitment to the opportunity. Having watched most of the hosts involved here, these results aren’t out of line at all with how it felt.

Rodgers brought a collected presence, moving things along nicely while still bringing some of his own personality to the show. (Watching multiple hosts, including experienced broadcasters like Katie Couric, Anderson Cooper, and Bill Whitaker, it was hard not to be retroactively more impressed by just what Trebek brought to Jeopardy!. The pacing, energy, and general feel can really lag without the right hosting presence.)

He also would undeniably have the potential to bring in a different audience; Jennings is a legend himself, of course, and aside from Trebek the person most associated with the show, but he and Rodgers certainly have different backgrounds. And, hey, maybe Rodgers will be playing closer to the West Coast in the near future, which would make him an even more feasible option.

Also watching contestants blow sports questions in front of an NFL MVP quarterback is even more entertaining, and it was already pretty great.