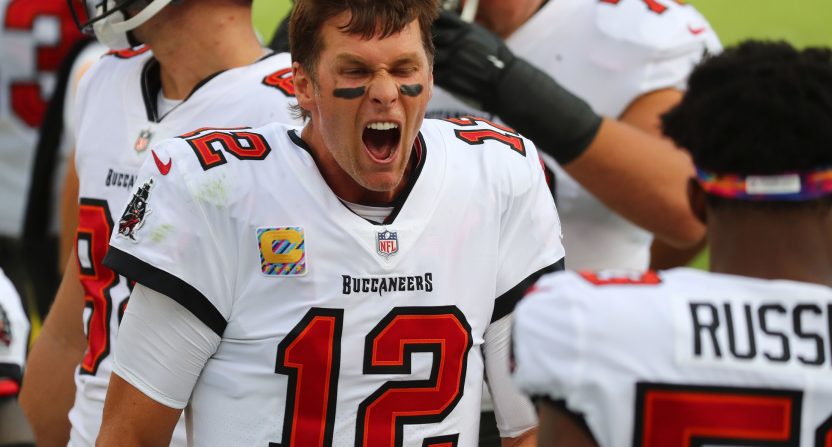 Fact-checking sites like Politifact (currently owned by The Poynter Institute) are usually known for examining claims by political figures. But on Tuesday, Politifact turned their focus to an Instagram story from Tampa Bay Buccaneers quarterback Tom Brady. That story, which Brady (seen above this weekend against the Packers) posted earlier Tuesday and which can be seen above, presents the text of a conversation, with one person saying “More suicide deaths than coronavirus deaths the past two months. So wash your hands and wear your masks, but don’t forget to be nice to people and look after yourself” and another responding “TRUTH!” Here’s a screenshot of that post: 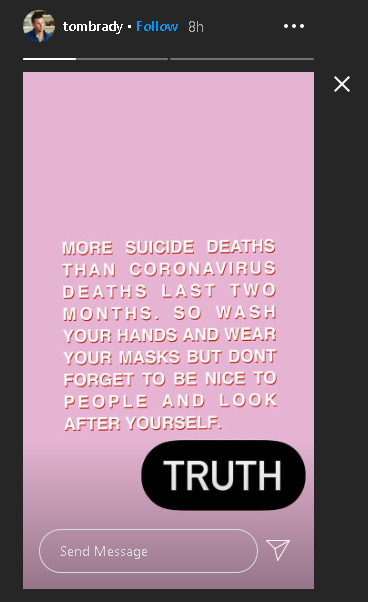 But there are no citations for that claim in Brady’s post. And the actual data shows a very different “TRUTH,” as Politifact’s Jon Greenberg writes:

We reached out to Brady to learn where he got his numbers and did not hear back, but government numbers and experts show he’s wrong.

There’s a general sense in the mental health community that disruptions in daily life, whether through social isolation or the loss of jobs, increases the risk of suicide. But Brady’s statement goes too far.

“There’s no way this can be true,” said president of the American Association of Suicidology Dr. Jonathan Singer.

…”For this to be right, you would need a rise in the suicide rate that is just impossible,” Singer said.

As Greenberg’s piece illustrates, there is no national data available yet on suicide numbers in 2020 (there is some at the county level). But the national data from 2018 (from the National Center for Health Statistics) indicated 48,312 reported suicides, an average of 4,026 per month. And the preliminary numbers for 2019 showed a slight downturn from that. Meanwhile, June saw around 19,000 COVID-19 deaths in the U.S., and that number has since climbed to around 22,000. And there’s been no data to suggest that suicides are happening nationally at five to six times the rate they were in 2018, and Singer (someone who would definitely know) called that kind of rise “just impossible.” So this appears to be some pretty bad misinformation being spread by Brady, especially with no indication of where he got it from.

The National Suicide Prevention Lifeline can be reached at 1-800-273-8255 or https://suicidepreventionlifeline.org/.