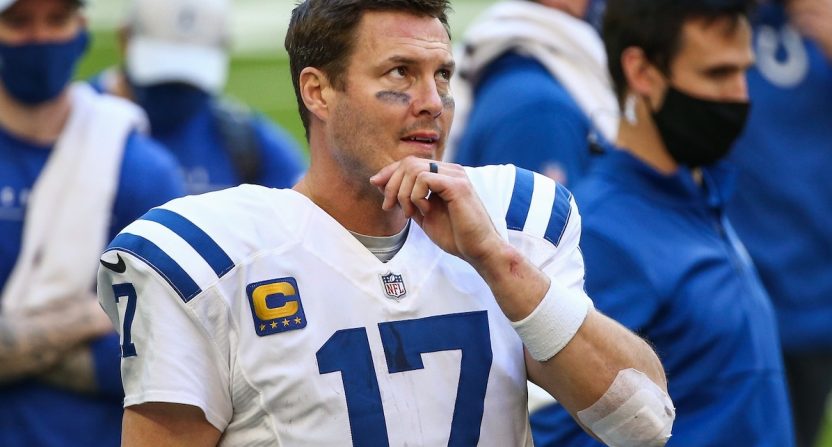 After 17 seasons, quarterback Philip Rivers is retiring from the NFL. He gave the news to the San Diego Union-Tribune‘s Kevin Acee Tuesday night.

The planned next step for Rivers is to coach high school football. In May, he was announced as head coach-in-waiting for St. Michael Catholic High School in Fairhope, Alabama. At the time, he had recently signed a one-year contract with the Indianapolis Colts following 16 years with the Los Angeles (and San Diego) Chargers and wasn’t certain how much longer he would continue his NFL career.

But could a TV network convince Rivers to put off his dream of coaching high school football for a few more years, in favor of broadcasting?

As the 2020 NFL season neared its end, Front Office Sports’ Michael McCarthy reported that several networks were looking at Rivers, imagining him as the next Tony Romo who went right from a playing career to the broadcast booth to great success.

Sources McCarthy spoke with speculated that Rivers could become Fox’s No. 2 NFL analyst and could perhaps replace Troy Aikman in the No. 1 spot. (Yet Greg Olsen could also take that gig, having already agreed to work for Fox once he retires.) Stepping into ESPN’s Monday Night Football booth was also mentioned as a possibility, though Louis Riddick won’t be leaving for an NFL general manager position and it’s doubtful the network would want two quarterbacks in Rivers and Brian Griese on the crew.

Yet a decision could be held off until the NFL works out its next round of TV rights deals. ESPN/ABC’s agreement expires after the 2021-22 season, with the contracts for Fox, CBS, and NBC running out after 2022-23.

And if a streaming deal is part of the new TV package, that would be another platform where Rivers could work in either a game broadcast or studio role. He could arguably be the face of the NFL’s streaming coverage, whether that’s with Amazon, Apple, or another outlet.

An Alabama native, Rivers has said he dreamed of following his father’s path in coaching high school football. Coaching his two sons when they get to high school (they’re currently in sixth and third grade, respectively) might also be something he’s looked toward.

“My dream would be to be here for a long time, a long, long time,” Rivers told the Associated Press. “To see grandchildren come up through the school would be my dream.”

St. Michael principal Faustin Weber made it sound as if the expectation was for Rivers to take over as coach very soon after retirement. So he could be preparing for spring practice in the coming weeks.

If Rivers is serious about jumping right into coaching prep football and sees a long-term future with it, perhaps that indicates he might be better for a studio role in which travel could be limited (or kept to remote broadcasting amid COVID-19 concerns), the schedule more consistent, and the time required less demanding.

Hey, if Michael Strahan can host Good Morning America throughout the week, then do Fox NFL Sunday, coaching at St. Michael before broadcasting a pregame show each Sunday seems plausible for Rivers.