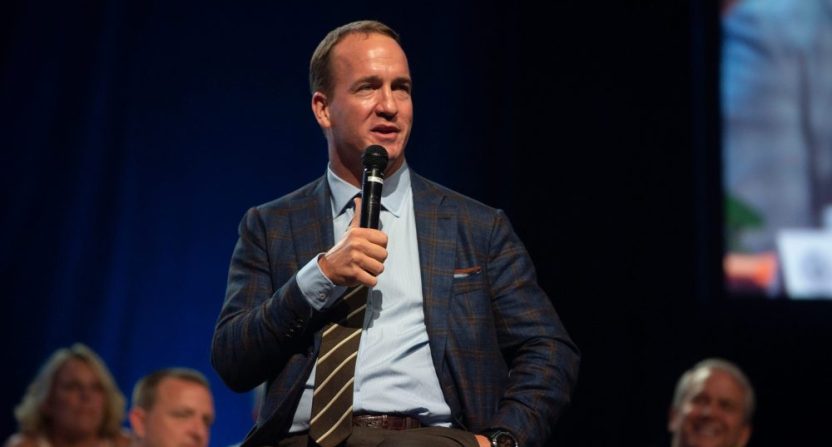 For years, there was an expectation that Peyton Manning would become the next great football analyst. But according to the legendary quarterback, he didn’t want the commitment and grind that comes with being a lead NFL broadcaster.

Manning joined a recent episode of The Volume network’s The Colin Cowherd Podcast to preview the NFL season. During their conversation, Cowherd asked Manning about adjusting to life after football, and the retired quarterback credited his former head coach Tony Dungy for offering valuable advice.

“The best advice I got was from Tony Dungy the year that I retired,” Manning told Cowherd. “He said, ‘Peyton, don’t make any rash decisions. Don’t go sign up to do this right away, take a coaching job, get involved in an organization, go into broadcasting. Just take a year and let everything calm down.’”

Apparently, Manning didn’t share Dungy’s advice with Tom Brady, or if he did, Brady didn’t listen. Manning took a year off after retiring to avoid any rash decisions. Brady retired and attempted to rush into four different decisions. He reportedly wanted to play for the Miami Dolphins, he sought NFL ownership, he signed a 10-year contract with Fox and ultimately returned to the Tampa Bay Buccaneers, all within 39 days. Sounds like a person who wasn’t able to enjoy the relaxed setting of retirement.

While Brady landed a massive $375 million contract with Fox, Manning doesn’t seem to feel like he missed the boat by choosing not to pursue a lead analyst role.

“The commitment to be gone every weekend because there are no home games when it comes to broadcasting and doing it the right way like Tony Romo does it, Cris Collinsworth. The late John Madden started it: go watch practice, go interview the teams, be there-hands on. It’s the only way to do it well,” Manning said. “It’s a four-day commitment. I wanted my fall weekends to be free.”

Manning values taking that wait-and-see approach as he adjusted to life after football, crediting that mindset for allowing unforeseen opportunities to come his way.

“I just kind of found different things along the way that kind of popped up because I didn’t jump into something right away,” Manning continued. “And now I get to do two shows with each of my brothers. Eli (Manning) and I get to watch pro football from our houses! I do it from my neighbor Scott’s garage, Eli does it on his backhouse, and we get to watch it and laugh and make fun of each other and we have Snoop Dogg watch it with us, are you kidding me? There’s no way I would have thought I could do something like that.”

After ESPN repeatedly approached Manning about joining their Monday Night Football booth, they eventually piqued his interest with the Manningcast. ESPN gets Manning’s vaunted analysis, and Manning gets to avoid the demanding travel schedule of a broadcaster. While it doesn’t earn Tom Brady-money, Manning’s salary is believed to be similar to Troy Aikman’s, which is north of $10 million annually.