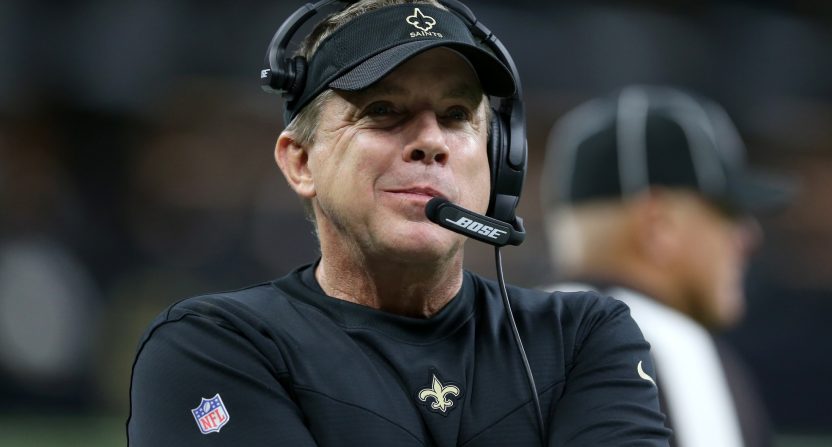 Outlets love predictions at the start of every year. People love making them (especially when they can do it anonymously), and people love reading and reacting to them. So it’s no surprise that ESPN’s Jeremy Fowler has a predictions column for 2022 focusing on the NFL, with various anonymous executives and coaches making predictions about the coming year.

In Fowler’s ESPN+ column (subscription required), there’s a section relevant to us. In it, several of the anonymous personalities predict that current NFL head coaches could move into TV. Specifically, Pete Carroll, Sean McVay, and Sean Payton are mentioned as targets for TV jobs.

As I prepared for the coaching carousel this offseason, several well-informed people brought up Payton or Carroll becoming television stars sooner than later. Nothing was founded, but the chatter was prevalent enough to become a prediction in the eyes of some evaluators.

From the traditional networks to new players such as Amazon, the salaries are mushrooming.

“Not sure I see Payton walking away from coaching — he loves it too much — but there’s definitely some buzz there that maybe he’s being courted on that side,” an NFL coordinator said. “Maybe he goes and does that and returns one day to coach the Cowboys or something.”

Carroll’s sunny disposition would be perfect for TV, and he turns 71 in September. He doesn’t appear ready to give up coaching, but a cushy spot on-air could be waiting for him.

McVay is half Carroll’s age (35), but several execs have made the Jon Gruden comparison with his career path (minus the email scandal, obviously).

“I think he’s trying to get that Super Bowl ring quickly so then he can have options. … If he wants to do TV for a while, he’d be great at it and can always go back and coach any team he wants after that,” an NFC exec said.

There are only so many TV jobs to go around, and you’d think that if any of these three would leave a coaching job, they’d be leaving for a high profile role – in other words, a Sunday studio role or a game analyst role. Those jobs are in short supply, but with Amazon entering the fray with the exclusive rights to Thursday Night Football season this fall, it wouldn’t shock me if they wanted to make a big splash, and what bigger splash than hiring a current NFL coach or Sunday analyst for that package? If the latter happens, Fox or CBS could easily hire one of the coaches to replace whoever Amazon hired in their broadcaster lineup.

Will any of these coaches actually leave their jobs this season? I doubt it, but if so, we’d probably learn about it in the next couple of weeks. I just can’t see any of them waiting until like, June and quitting.