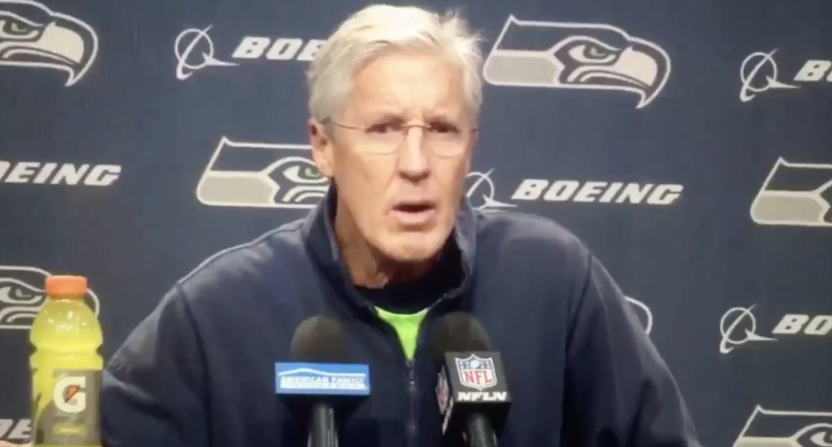 The Seattle Seahawks will play the surprising Jacksonville Jaguars on Sunday, and one reporter at Pete Carroll’s press conference Wednesday wanted to know what the Seahawks coach thought of Jaguars coach Gus Bradley’s work this season.

The only problem? Gus Bradley does not coach Jacksonville anymore. He was fired last December and now works as defensive coordinator for the San Diego Chargers, as Doug Marrone leads the Jags.

Carroll handled the awkward situation quite well (after initially making an extremely perplexed face). Here’s how the exchange went down:

Reporter: Has Gus, with what he’s accomplished in Jacksonville, surprised you at all?

Carroll: Umm, would you ask that question again for me? Help me out, I’m not sure where you’re going.

Reporter: What Gus has done in Jacksonville, has it surprised you at all?

Carroll: Um, ok. Let me answer it this way. What Gus is doing with the Chargers is really good. He’s doing great. He’s the coordinator of the Chargers, and he’s always been a good coach. I’m sure it’s hard, like any time a coach moves and you look back and you see your team kind of emerging and doing their stuff, you wonder what it would have been like if you’re still there and stuff. Because he had a lot to do with building this team and this roster.

This might have been the most awkward moment at a Pete Carroll press conference, and coach handles it pretty graciously. Asking about Gus Bradley. #Seahawks pic.twitter.com/oWEVEbuCwV

Props to Carroll because he could not have been much nicer about that. Can you imagine if someone asked Bill Belichick about Broncos coach Gary Kubiak or Bills coach Rex Ryan? Let’s just say the answer probably wouldn’t be diplomatic.

Of course, everyone messes up sometimes, and reporters are no different. Now we know that if you’re going to accidentally ask a ridiculous question at a press conference, Pete Carroll is the guy to do it in front of.