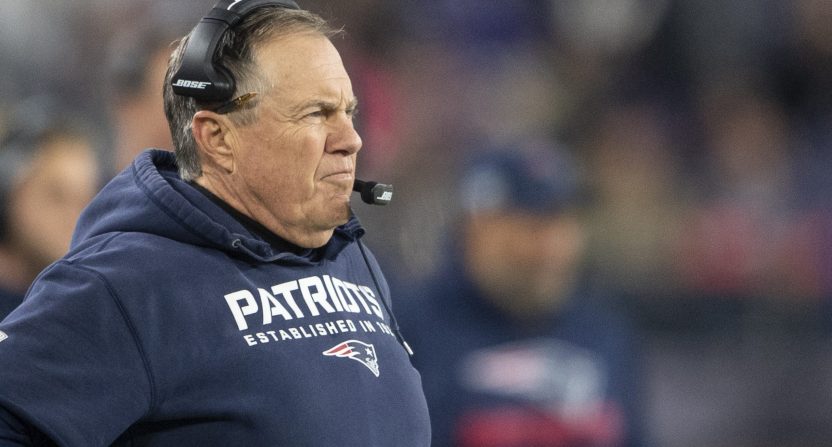 There was a brief run of excitement on Twitter today when Bengals head coach Zac Taylor confirmed during his press conference that he was indeed aware of someone from the Patriots filming in the stadium during their loss to the Browns.

Watching Bengals HC Zac Taylor’s press conference. A reporter just asked if he could confirm if a Patriots employee was videotaping their play calls at the last game? Coach said “No comment and they are aware”
Um….

The Patriots play the Bengals this week, and a Bengals official apparently confiscated the tape and forwarded a copy to the league. Adam Schefter reported that the crew was credentialed to be there, but the Bengals had no knowledge.

Patriots’ advance scout was not filming but being filmed, per a league source. He was being filmed for a feature the team produced called, "Do Your Job." The video crew was credentialed by the Browns to shoot video in the press box and their PR person was aware, per the source

An official for the Bengals, who were playing at Cleveland Sunday, saw a member of the video crew wearing a Patriots’ shirt and alerted the league, which confiscated the video, according to the source. NFL has video; Patriots say video is a press-box feature of the advance scout.

Bill Belichick was asked about it and immediately denied any knowledge or involvement.

Of course, the Patriots have an incredibly suspect history when it comes to filming other sidelines during games, so you’d think if any team would go above and beyond to avoid this happening accidentally, it would be the Patriots. Still, if it was just the scout being filmed in the press box, the tapes would surely show that, and we could all just move on. Except, as the team noted tonight in a statement, the crew also filmed the field from the box.

For the past year, the New England Patriots content team has produced a series of behind-the scenes features on various departments within the organization. The seven previous “Do Your Job” episodes are archived on patriots.com. On Sunday, Dec. 8, the content team sent a three-person video crew to the Bengals-Browns game at FirstEnergy Stadium in order to capture one part of a longer feature on the Patriots scouting department, in this case a Patriots pro personnel scout while he was working in the press box.

While we sought and were granted credentialed access from the Cleveland Browns for the video crew, our failure to inform the Bengals and the League was an unintended oversight. In addition to filming the scout, the production crew – without specific knowledge of League rules – inappropriately filmed the field from the press box. The sole purpose of the filming was to provide an illustration of an advance scout at work on the road. There was no intention of using the footage for any other purpose. We understand and acknowledge that our video crew, which included independent contractors who shot the video, unknowingly violated a league policy by filming the field and sideline from the press box. When questioned, the crew immediately turned over all footage to the league and cooperated fully.
The production crew is independent of our football operation. While aware that one of the scouts was being profiled for a “Do Your Job” episode, our football staff had no other involvement whatsoever in the planning, filming or creative decisions made during the production of these features.

We accept full responsibility for the actions of our production crew at the Browns-Bengals game.

The explanation on its surface is certainly plausible (especially because it’s not like the Patriots are likely to need extra help to beat 1-12 Cincinnati), and if it were any other team, we may never have heard of it. But this is the Patriots, the NFL team least-deserving of a best-intentions interpretation of their actions. Even if it was by accident, it’s still the kind of thing that other teams are going to complain about, not unreasonably.

The NFL is probably going to have to do something, even if it’s just a slap on the wrist in the form of a statement. It’s not likely to be a protracted investigation or a massive penalty, but it is almost hard to believe this happened again, no matter the motives.