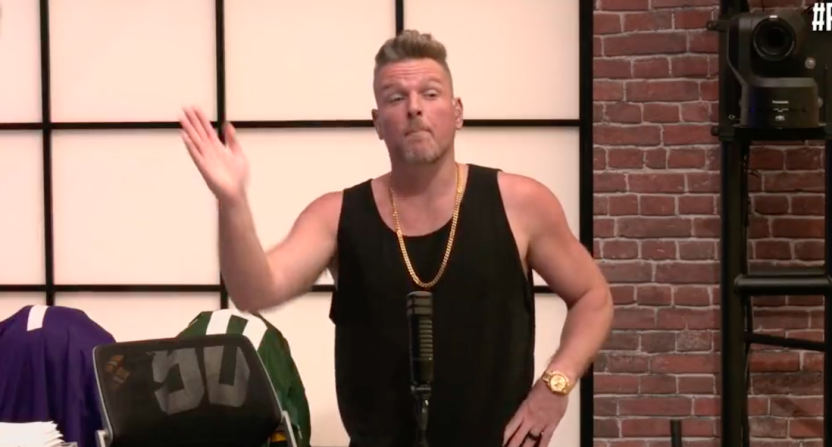 Pat McAfee’s graphics department’s nightmare is over. Less than a week after McAfee told his audience that the “No Fun League” told him that he’s not permitted to use any NFL logos on show graphics, the league has reversed course.

On Monday’s show, McAfee went on an epic rant against the league’s decision, not only calling out the league over its decision but also implying that he might feel a bit looser to discuss some of the shadier aspects of the NFL’s business.

“It’s been great doing business with you. I’m happy we have covered your league in the way that we have for the last few years,” McAfee said Monday. “I’m appreciative of the league and everything it’s done. I don’t think we’ve really touched on many subjects we could’ve dabbled into and I think we’ll do that this offseason, for sure. Things I know a lot about, that my friends know a lot about, like insurance and CTE and concussions and everything like that. I think we can find some people to chat about, to learn more about what the NFL should be held accountable for and what they shouldn’t be held accountable for because I thought the entire deal with the NFL – the Professional American Football League – I’m so sorry, that I wanted to get involved with was making the game celebrated.”

Turns out, someone at the NFL was listening. On Thursday’s show, McAfee announced that he is allowed to use NFL-related logos on his program once again. He also delved a little bit into how the whole brouhaha happened in the first place.

Football is happening this evening in the National Football League ??#PMSLive pic.twitter.com/QLQVCiZGYb

“The good people at NFL Films took a conversation to the people at the NFL, went to bat for us, came back this morning with a phone call, and said ‘Hey, that little dust-up that just happened just a couple days ago? Please move along, understand that the NFL, its media, its partners, are all going through an interesting time right now,’” McAfee said Thursday.

“We are all on the Oregon Trail for this digital age. This social media age. The sports gambling age. This independent show age, this new media age. Thank you, Draymond (Green), Lebron (James), and everybody for showing us how to do it all. But in this new age, there gonna be a lot of things that are gonna have to happen. We happen to be near the front of said Oregon Trail, in which people are going.

“We are lucky to be here, we are not the first, but we are in earlier stages of a relationship between the NFL and a digital platform, a social media platform, an independent platform, but one that has enough money… The NFL having to navigate those waters for the first time. Us being near the front of that entire thing having to happen. With rights, with sports gambling, with who has what and who doesn’t have what. I can understand now how there could be some confusion.”

McAfee might have crafted a jovial, fun-loving persona but that persona commands a very lucrative and successful sports media operation. Along with the success of The Pat McAfee Show, where he’s currently raking in roughly $30 million from FanDuel, he’s parlayed his success into a gig on ESPN’s College GameDay and a college football simulcast on ESPN2. He previously worked as an announcer for WWE and likely would be welcomed back one day. His weekly Aaron Rodgers interviews always have the potential to create the day’s news cycle. And he’s also done work with Fox Sports, Westwood One, and the XFL along the way.

As he alluded to in Thursday’s announcement, McAfee is the kind of “new media” sports talent that older sports media executives might have a hard time quantifying, especially from a business perspective. But the presumed backlash that came from Monday’s rant certainly made its point, even for an entity as powerful as the NFL.