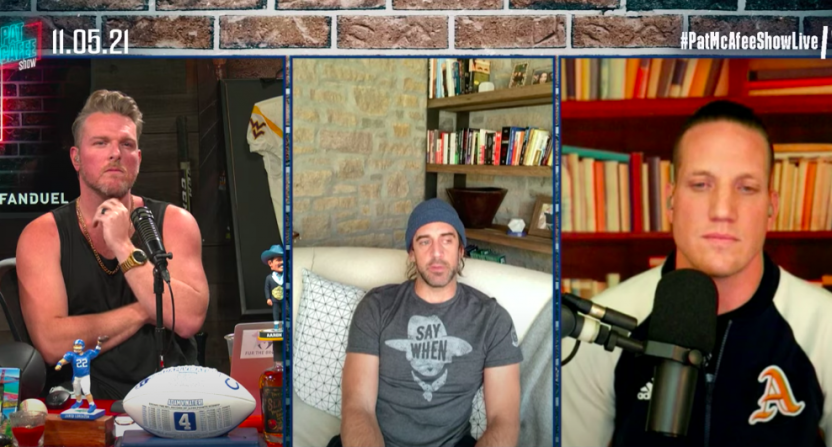 Short of getting a one-on-one interview with the Texas assistant coach’s girlfriend’s pet monkey that turned Twitter upside down for a night, there was probably no bigger interview “get” this week than Aaron Rodgers. As soon as the news started breaking on Wednesday that not only had the Green Bay Packers quarterback tested positive for Covid-19, but he had actually never been vaccinated in the first place despite carefully implying that he had back in August, everyone wanted to be the reporter or outlet that got a statement or reaction from the NFL MVP.

It was ultimately not surprising to find out on Friday that the lucky interviewer would be Pat McAfee. The host of The Pat McAfee Show had a couple of things going for him. First and foremost, the former NFL punter has a standing relationship with Rodgers in which the quarterback stops by every Tuesday to discuss a myriad of topics. Secondarily, while McAfee has a reputation for going big and making waves, he’s also cultivated a very cozy and friendly atmosphere for regular guests like Rodgers, who can presume that they’re not going to get railroaded with tough questions.

That’s how it played out on Friday as McAfee introduced Rodgers and essentially let him go on a 20-minute diatribe to explain why he had decided not to get vaccinated. Our own Andrew Bucholtz has transcribed the entire interview and any necessary factual complimentary information here. Rodgers, who didn’t even get out of his first sentence before using the terms “woke mob” and “cancel culture,” launched into a prepared set of remarks in which he explained that he had done his own research into vaccines, decided to take medical advice from comedian Joe Rogan, compared himself to Martin Luther King, Jr., unironically used the phrase “my body, my choice,” and wondered aloud how people still get Covid-19 after they’ve been vaccinated.

While Rodgers said “I’m not some sort of anti-vax, flat-earther,” NBC News senior reporter Ben Collins, who covers vaccine news closely, said afterward that “it would be impossible to draw up a more stereotypical anti-vaxxer argument than the one being outlined by Aaron Rodgers today.”

All of which is to say that if Rodgers were looking for the perfect platform to lay out his case for not getting vaccinated, he found it. McAfee gushed over Rodgers before and during the interview, introducing the Packers quarterback with a round of applause from him and his staff. Rodgers also thanked McAfee and co-host AJ Hawk for personally reaching out as well following the initial news.

McAfee continued to butter up Rodgers, referring to his weekly appearances as “incredible” and noting “the haters out there” who had certain thoughts after finding out. McAfee refers to Rodgers as “incredibly deep” and “incredibly intelligent” before essentially giving Aaron the floor to start his explanation.

Rodgers then delivered his diatribe for almost exactly 20 minutes, uninterrupted, except for a time in which McAfee attempted to ask a question before Rodgers said “let me finish,” and McAfee did. When he finally did chime in, it was less of a probing question and more of an agreement about Rodgers’ thoughts on ivermectin and the potential impact of vaccines on sterility, before essentially saying that Rodgers’ predicament is the quintessential distillment of every pandemic argument we’ve been having for the last two years.

Saying all of this is not meant to demean McAfee, but rather to show how the platform he was providing was, presumably, the ideal scenario to Rodgers. And to be fair to McAfee, while most of his questions were positioned in a way to appease Rodgers, he did attempt to get to the heart of certain issues, such as why Rodgers used the term “immunized” when asked if he was vaccinated and didn’t follow that up by providing more clarity.

Many people also seemed to feel as though McAfee had a visceral reaction when Rodgers brought up that he was taking advice from Joe Rogan, trying his best not to show it.

In many ways, the way that McAfee catered to Rodgers and cleared space for him to speak his mind was exactly what the quarterback was looking for when it came to finding a place to share his rebuttal. As many have pointed out, Rodgers seems to himself as the smartest person in the room at all times, and McAfee is more than happy to stroke that ego in order to make the quarterback comfortable. Had McAfee pushed Rodgers or tried to ask questions early on before Aaron had been asked to work through his many talking points, he might have seen it as a hostile space, or as McAfee overstepping. And, who knows, he might have even ended the interview if he felt as though this was no longer a safe space.

Rodgers doesn’t need McAfee in this situation, McAfee needs Rodgers. And he clearly doesn’t want to lose exclusive access to one of the biggest athletes in U.S. pro sports over a question or two.

So in that way, it’s the perfect platform. And it makes a lot of sense why Rodgers wanted to do it here instead of speaking with, say, one of the beat reporters that cover the Packers, or appearing on The Dan Patrick Show. Those options would invariably include pushback, time limits, and potentially negative reactions.

But in another sense, it might have been the absolute worst platform for Rodgers because he saw it as the perfect platform. Because if Rodgers truly is as tied up in his intelligence and self-stylized image as it seems, he would have been unable to see that a live showcase in which he was allowed to spout his worldviews for 20 minutes could actually be a bad thing.

While Rodgers certainly seems to have known he would receive negative attention for his views from the “woke mob” he referenced, it’s unclear if he truly understood the perception that he left in the wake of this appearance. The impact that this appearance will likely have on his reputation in many circles, some of which Rodgers clearly wants to remain a part of, is fairly large.

"I think at some point we need to remember that health is not the same for everybody. There's a lot to natural immunity & natural immunity has not been a part of the conversation" ~@AaronRodgers12#PatMcAfeeShowLIVE pic.twitter.com/kOa2T8C2lu

For better or worse, Aaron Rodgers showed the world exactly who he is. And that only could have happened on a platform like The Pat McAfee Show under the circumstances he’s created. Had he sat down to be interviewed by a more seasoned journalist or a podcaster with a journalistic background, he undoubtedly would have had to face tougher questions and wouldn’t have been able to talk about certain topics unchecked. And that probably sounds like a bad thing to him, but perhaps, in some way, that platform undercuts the depths of where Aaron Rodgers went on Friday, saving him from himself.

Time will tell what the full implications of Friday’s interview will be. It’s unlikely that Rodgers will face major pushback from the Packers or the NFL, though the league is refuting his claim that they sent a medical professional to speak with the team or players. Beyond his playing career, however, Rodgers recontextualized his entire career in one day. He probably made some new fans on one side, lost some fans on the other, and is watching his reputation getting laundered through the court of public opinion. He clearly believed that the way he handled the situation was the ideal scenario. Because, it would appear, Aaron Rodgers thinks he knows best and didn’t want anyone to tell him otherwise. He got what he wanted.