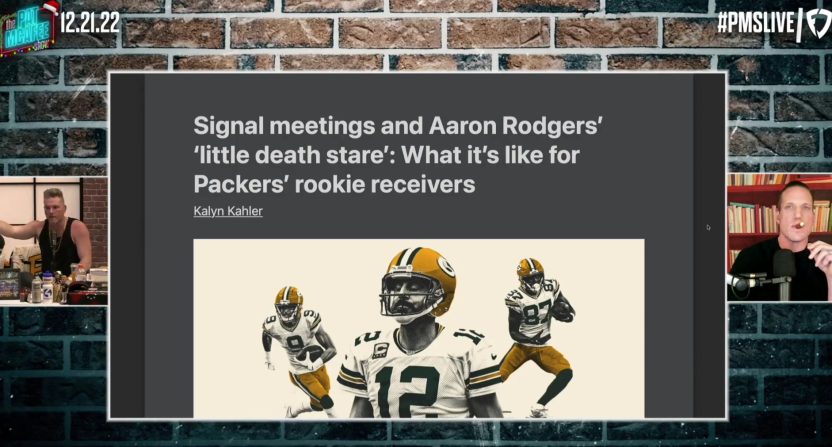 On Tuesday, Green Bay Packers‘ quarterback Aaron Rodgers used his regular and thoroughly unquestioned media spotlight on The Pat McAfee Show to bash a “Signal meetings and Aaron Rodgers’ ‘little death stare’: What it’s like for Packers’ rookie receivers” article from Kalyn Kahler at The Athletic. That appearance saw Rodgers calling it “by far the dumbest nothingburger article that I’ve read the entire season,” say “I don’t know if you can ever top the COVID toe Wall Street Journal article, but this was the dumbest article of the year, by far,” and claim “95 percent of that article was absolute complete horsesh*t and the other five percent is exaggerated nothingness.”

But maybe the most exaggerated claim of all was McAfee referencing “anonymous sources” in his comments on the article. He presented it to Rodgers this way:

“It alleged, from anonymous sources I believe, that you will use signals from . . . like two, three years ago and none of the wide receivers know what it means, the young guys specifically don’t know what it means, and then they get like accosted for not knowing what it means, when you never taught them that,” McAfee said. “Is every word in that article bullshit?”

The article featured 11 current and former Packers’ receivers speaking on the record. It featured zero anonymous sources. On Wednesday’s show, sans Rodgers, McAfee admitted that he hadn’t actually read the article in question before bashing it. He then did a dramatic reading of it, starting with “Nonetheless, should have read this article. Let’s do it live.”

In many ways, this further illustrates what McAfee’s show is and what it is not. It’s a place for McAfee and regular co-host A.J. Hawk to give Rodgers a weekly unchallenged platform to speak about whatever the quarterback wants to discuss, whether that’s vaccines, Joe Rogan, or the nature of truth. (Rodgers has many of those platforms these days, but his recurring spot with McAfee is still notable.) It is not really a place for serious sports media analysis, as is shown by the times McAfee has tried that.

McAfee’s show is far from alone there, as the likes of Stephen A. Smith, Skip Bayless, Colin Cowherd and more have certainly shown the audience for being interesting rather than accurate. And he’s definitely gained a lot of valuable contracts and broadcasting deals (some even criticized by Rodgers) with the approach he has taken, so it seems to be working for him. But the initial discussion here Tuesday was quite the example of McAfee boldly weighing in on something he later admitted he was uninformed of. And his Wednesday revisitation of it was quite a doubling down on his criticisms even while issuing a “correction” on the remark he made on it being based on anonymous sources. And Kahler commented on that later Wednesday:

Amazed Pat got on his show to issue a correction (his words) about saying I had anon. sources when everyone was really on the record, but then used that an opp. to do a dramatic read aloud and further criticize my reporting. ??
Again, Pat, just have me on the show. https://t.co/nfstf8YCaf

There isn’t necessarily any real winning here for anyone. There’s certainly a place for criticisms of McAfee’s uninformed “anonymous” take, and for he and Rodgers commenting on an article this way without even bothering to read it first. And many of those have been seen in the sports media landscape, including with Mike Florio’s Pro Football Talk take on this, which zeroed in on Rodgers:

Frankly, I don’t know what’s in Rodgers’s brain. (I’m not sure I want to.) But either he didn’t truly read the article or he’s affirmatively lying about its content in order to make himself look less of a bully and/or tyrant and/or someone who has significant intelligence but not nearly enough emotional intelligence.

Good relationships are critical to the success of any organization. Rodgers failed to quickly establish good relationships with his young receivers. And it has hurt the team’s prospects in 2022. Kahler’s article makes that reality even more clear.

Maybe that’s why he called it “horsesh*t.” The truth is that he doesn’t want people to realize that, in reality, he’s the horse in this equation — and that he’s the one dropping the sh*t all over the place.

But it’s a bold stance to have expectations of accurate and informed media discussion on The Pat McAfee Show, especially when it comes to anything involving Rodgers. At this point, it feels like those following McAfee and his content (and particularly his Rodgers content) know what they’re likely to get. And on that front, McAfee’s response Wednesday (which feels like it can be largely summed up by “I’ll offer this correction, but I’m not sorry”) feels about right for him and his show. It’s enough to ward off “He continues to stand by a verifiably-inaccurate claim,” but not enough to actually admit an error in judgement.

One of the many unfortunate things here from a far-outside perspective is that it seemingly doesn’t have to be this way, though. And that can be generalized to Smith, Bayless, Cowherd and others. There are plenty of uncontestable ways to offer provocative opinions on sports; just get the facts right first. Even Rodgers did a better job of that than McAfee this week; Rodgers’ “95 percent of that article was absolute complete horsesh*t and the other five percent is exaggerated nothingness” remark can be debated and analyzed and criticized, but it’s not factually wrong. That’s a difference from the initial “anonymous” claim here from McAfee. McAfee and Rodgers can absolutely dispute what’s in Kahler’s article all they want, and play to their crowds and appeal to their fans while doing so. But it would be great to see that start from correct premises, including actually reading the article.