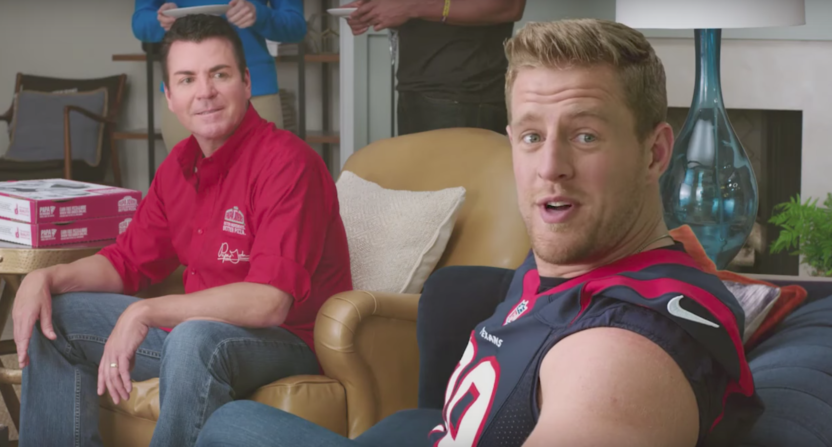 NFL owners have huffed and pouted all fall about how players protesting racial injustice has hurt their bottom line. Well, it turns out that maybe they weren’t completely off-base with those concerns.

As reported by ESPN and others, Papa John’s founder and CEO John Schnatter said Wednesday that the protests have rubbed off on his pizza chain, an official NFL sponsor, and Papa John’s executives said they had pulled some NFL-associated advertising in response.

“The NFL has hurt us,” company founder and CEO John Schnatter said. “We are disappointed the NFL and its leadership did not resolve this.”

Executives said the company has pulled much of its NFL television advertising and that the NFL has responded by giving the company additional future spots.

“Leadership starts at the top and this is an example of poor leadership,” Schnatter said, noting he thought the issue had been “nipped in the bud” a year and a half ago.

Papa John’s COO Steve Ritchie told reporters that the company is revising sale projections for next quarter downward, largely due to the NFL. He says Papa John’s, which has a sponsorship agreement with the league as well as with 23 individual teams, is the sponsor most recognized for its association with the NFL, per ESPN. According to Sports Business Journal, Papa John’s has informed the NFL that in-game sales are down since Donald Trump criticized the league back in September.

Regardless of how or why Papa John’s sales are down, the fact the company blames the NFL is bad news for the league, from the perspective of revenue and also public relations. Owners cannot be thrilled to have a key sponsor angry with them, and they especially cannot be pleased to have that sponsor trashing them publicly.

This is not the first time Schnatter, an avowed Republican, has offered his take on hot-button political issues. Most notably, he made dubious claims in 2013 about how the Affordable Care Act would hurt his pizza business.

Schnattter obviously does not like NFL players protesting, likely for reasons both personal and financial, and by going public he’s attempting to strong-arm NFL owners into action. Is it possible that association with the increasingly unpopular NFL is denting pizza sales? Maybe. But is it also possible that Papa John’s is suffering due to innovation from competitors (Domino’s, for example, is doing well), the rise of DoorDash and Grubhub, or the fact that their pizza isn’t the greatest? Sure is.