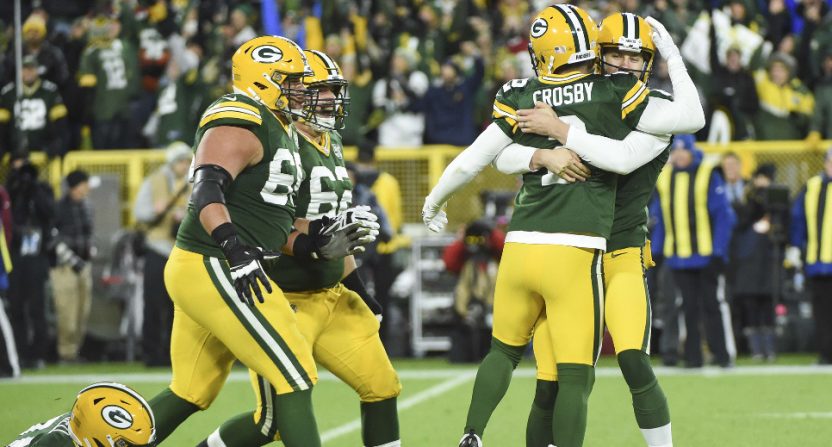 It can be interesting to see how the ratings stack up when there are two big sporting events on one night, especially when teams from the same market are both involved. In Milwaukee, there were plenty of eyes on both the Brewers’ 4-0 win over the Los Angeles Dodgers (boosted by unlikely hero Orlando Arcia) in Game 3 of the NLCS and the Green Bay Packers’ 33-30 Monday Night Football win over the San Francisco 49ers (thanks to an Aaron Rodgers-led comeback), but the NFL broadcast came out on top, aided by appearing on over-the-air ABC affiliate WISN as well as ESPN (the MLB game was only on FS1) and by the baseball game ending earlier (prompting many to watch the NFL ending).

Here’s more from Chris Foran of The Milwaukee Journal-Sentinel:

The Brewers’ 4-0 victory over the Los Angeles Dodgers, airing on FS1, had an average 25.3 household rating, meaning 214,650 households were tuned in to the game, according to Nielsen Media Research overnight ratings supplied by local TV stations.

But the Green Bay Packers’ Monday night game against the San Francisco 49ers — which ended with Mason Crosby’s last-second field goal and a 33-30 Packers win — had a 33.7 combined rating from WISN-TV and ESPN, which both showed the game. That rating translates to 285,917 TV households in the Milwaukee area.

Crosby’s kick wasn’t the Packers’ only last-minute boost. The Green Bay game ended about 15 minutes after the Brewers’; according to Nielsen numbers, the Packers’ combined rating surged to 48.5 in the final quarter-hour.

So that’s definitely not a “baseball is dying” or even a “baseball is dying in Milwaukee” narrative given the over-the-air and timing caveats (and another caveat is how more people tend to just flip on ESPN than FS1). Many NFL games do outdraw playoff baseball nationally, and have done so for a long while; that’s not anything new and not any reason for panic (unless you’re certain columnists), considering that baseball’s set up in a way where the key numbers are the local TV deals and the ratings there (which were just fine this year).

Anyway, it’s interesting to see the numbers for those two games in the same market, and they do seem to tell about the same story we’ve seen nationally this postseason; MLB ratings have been pretty good, with some notable improvements, but yeah, the NFL’s still often going to post better ratings at this part of the playoffs.