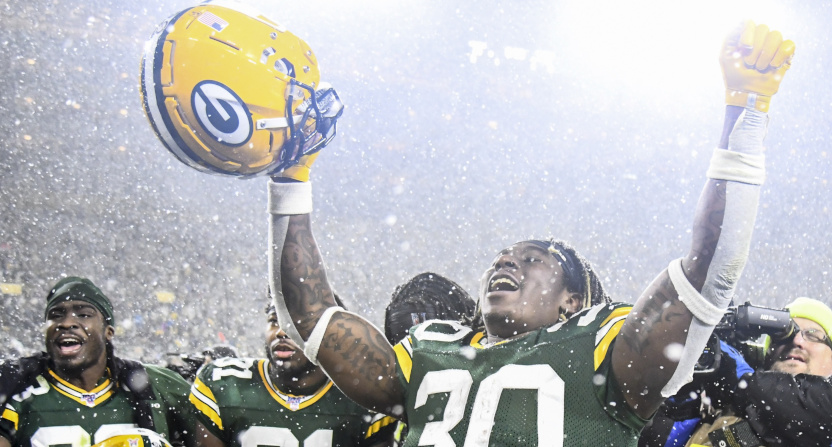 The Week 12 game between the Green Bay Packers and San Francisco 49ers is headed to Sunday Night Football. ESPN’s Adam Schefter reported Tuesday that the NFL has flexed the Nov. 24 game between the 8-2 Packers (RB Jamaal Williams is seen celebrating their Nov. 10 win above) and 8-1 49ers, which had been set for an afternoon slot on Fox, into the primetime slot on NBC.  That bumps the clash of the 8-2 Seattle Seahawks and 5-4 Philadelphia Eagles. And rather than replace the Packers-49ers’ game’s 4 p.m. afternoon slot on Fox, that game will now be at 1 p.m. Eastern.

This decision comes 12 days before the game, the cutoff for the NFL to make a non-Week 17 flex. And it makes some sense. At the moment, the 49ers and Packers are both leading their respective divisions. The Packers have a bye next week, so they’ll be 8-2 when this game’s played and still leading the NFC North (the 7-3 Minnesota Vikings can match Green Bay in wins with a victory over the Denver Broncos this week, but will have played one more game). The 49ers’ game this week is against the 3-6-1 Arizona Cardinals, so there’s a good chance they’ll win that and stay on top of the NFC West. So this matchup has a whole lot of playoff implications.

Of course, Seahawks-Eagles is nothing to sneeze at either, with both of those teams currently second in their divisions and tied with the first-place team (the 49ers and Dallas Cowboys respectively) in wins. And Packers-49ers isn’t necessarily better from a market perspective; on sheer market size, it’s #67 at #6 versus #13 at #4. Now, if you consider the Packers’ home market to be Milwaukee rather than Green Bay, they jump to #35, and they have a significant national following, so they’re a better draw than market size alone would make it seem.

But Green Bay-San Francisco isn’t clearly a better matchup based just on the teams involved. Our primetime schedule analysis earlier this year put the Packers 20th and fourth respectively in two separate viewership metrics (local viewership across all broadcasts through the first six games of the 2018-19 season and national viewership for 2018-19 national broadcasts featuring the team), while the 49ers were 22nd and 25th, the Seahawks were eighth and 11th, and the Eagles were third and 14th. So, like most flexes, this is about how the teams have played this year. And it’s probably mostly about the 49ers being better than expected and the Eagles not being as strong as many had expected.

Interestingly enough, this comes after this week’s Seahawks-49ers game on Monday Night Football (which Seattle won 27-24 in the final seconds of overtime) drew 15,978,000 million viewers on average for ESPN, their highest MNF audience this year. Now, given that that game involved teams on both sides of this flex, its audience doesn’t necessarily mean much one way or the other here. But it’s certainly a little unusual to see a team lose a primetime game and then get flexed into another one at the expense of the team that beat them. However, that MNF result means the NFC West race will be closer heading into Week 12 than it would have been if San Francisco had won, so that might add further appeal to Packers-49ers.

The NFL also confirmed Tuesday that there will be a pre-Christmas tripleheader on NFL Network on Dec. 21, the Saturday before Christmas. We reported back in April that they were considering that idea. Here are the teams for that matchup:

It'll be a full Saturday of @NFL games! ?

So that’s yet another primetime home game for the 49ers.

[Note: this post initially had Seahawks-Eagles going to 4 p.m. ET on Fox, as was listed in some initial reports. It will now be at 1 p.m. ET.)