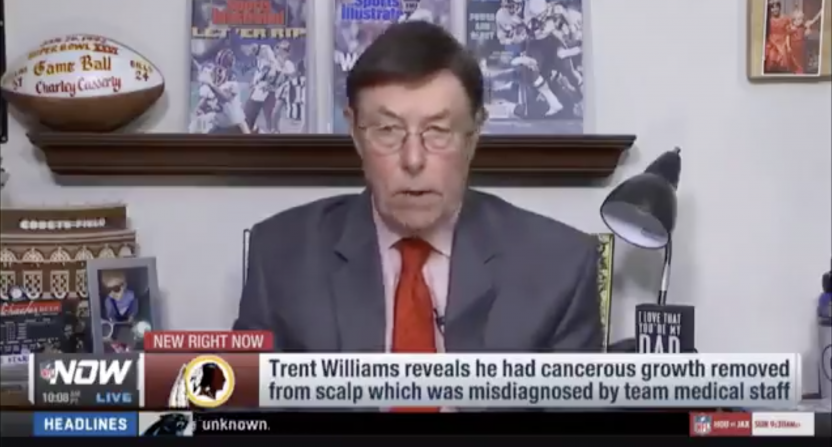 The Trent Williams saga is yet another chapter in the ongoing dysfunction of the Washington Redskins. Williams has been holding out and just recently came back to the team after he wasn’t traded by the trade deadline. Even though he came back, Williams claimed that he doesn’t trust the team because team doctors downplayed a brain tumor from six years ago that turned out to be a rare form of cancer that Williams got treatment for this past summer.

The NFL Players Association has been monitoring the Trent Williams story considering the seriousness of the situation. If what Williams says is true, the Redskins would be pretty scummy to be risking somebody’s life just so he can play. And the NFLPA is so serious that they’re paying attention to how Williams’ story is portrayed in the media.

In particular, the NFLPA has targeted the NFL Network for spreading “misinformation…that is not sourced and is only designed to tarnish Trent’s reputation.” The NFLPA didn’t name anyone specifically but it’s assumed that their statement was directed at former Washington GM Charley Casserly, who is an analyst on NFL Network.

Casserly revealed on Friday that Williams was told by team doctors three years ago that Williams needed to get his growth tested by a specialist and that he didn’t schedule the procedure. Casserly also suspected that Williams’ holdout is financially motivated and not because of the misdiagnosis.

Charlie Casserly said Trent Williams was advised to have growth checked out 3 years ago by a specialist … he thinks it’s about money pic.twitter.com/uz5FQ6Px1P

I’m curious to know how Casserly knows this. I highly doubt Williams or someone in his camp told him this so the only way Casserly would know is someone from Washington (or Williams’ personal doctor) telling him private medical information and that might bring potential (albeit unlikely) legal issues in and of itself. Jason Pierre-Paul once sued Adam Schefter for posting part of Pierre-Paul’s medical chart after he had a finger amputated in a fireworks accident claiming it violated HIPAA laws.

It is also important to note the situation Casserly is in. Casserly not only used to be Redskins GM throughout the 90s but he’s also an analyst for the NFL Network, the network that’s literally owned by the NFL. Because of that, there’s a potential conflict of interest to motivate Casserly to defend the NFL team. There’s no proof that Casserly or the NFL Network is being biased and I honestly don’t think that’s the case here. However, it would be unrealistic to assume that the thought isn’t in the back of some fans’ minds.

Either way, the situation between Trent Williams and the Washington Redskins has got to be one of the most contentious and ugly holdouts in NFL history. Most holdouts have to do with money but this is about somebody’s life. It seems like the sooner both sides can get away from each other, the better off both sides will be.