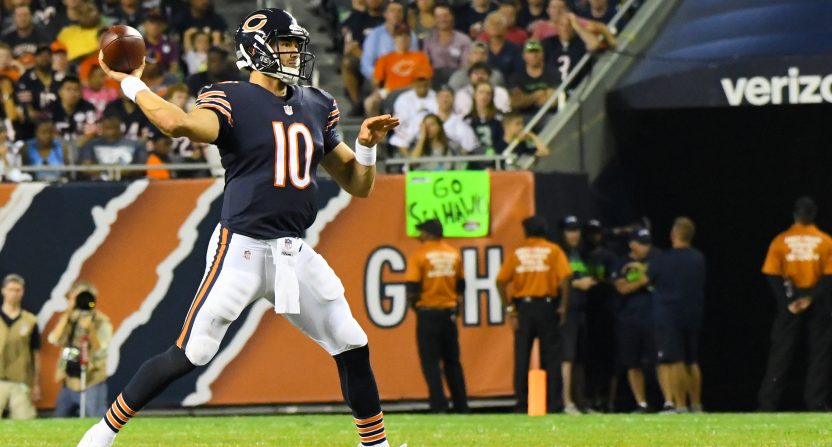 A notable differentiation of sports media coverage from, say, political media coverage, is that being a publicly-admitted fan of one of the teams involved isn’t necessarily a bad thing. Yes, there are still plenty of people who argue for “Objectivity!” at all costs even in sports, as if that’s even attainable, but especially on TV coverage, many figures have shown their fandom clearly for decades. And that often doesn’t get in the way of them doing their jobs. Jeff Agrest of The Chicago Sun-Times has an interesting behind-the-scenes story on how fandom and work interacted in 2017 for Charlie Yook, who’s overseen NFL Network’s draft production since 2014, and is an avowed long-time Chicago Bears fan:

At the 2017 NFL Draft in Philadelphia, Yook was watching the proceedings from where he always does, in the production truck. The Bears had traded with the 49ers to move up from the third overall pick to the second. Yook wondered aloud what general manager Ryan Pace was doing, but he tempered his consternation, saying, “As long as it’s not Mitch Trubisky, I’ll be fine.”

A perk of working behind the scenes is knowing teams’ selections before they’re announced. The production crew sets up the graphics and videos for each player to present to the audience. So when the producer sitting in front of Yook learned the Bears’ pick, he uttered, “Uh, oh,” turned around and said, “The pick is in. You’re not gonna like it.

Yook whipped down his headset and broke a monitor.

“And then two seconds afterwards, I was like, ‘All right, everyone, get back to this, let’s concentrate. And can someone fix my monitor, please?’ ” Yook said. “I used a lot more colorful language, though.”

This is a delightful story to read (and it’s part of a bigger piece from Agrest on Yook and his background, which is worth reading in full for its other insights into NFLN draft coverage). For one, it’s quite funny that NFL Network’s lead producer had the same reaction to the pick of Trubisky (seen above in a 2018 game) hat many Bears’ fans around the world did. And that shows his passion for the sport.

Beyond that, though, this seems to illustrate what it’s like to be a fan while professionally working in sports media; you can have your momentary reactions, but then you have to get back to your job. But for a few moments in 2017 at least, Yook was right there with many Bears’ fans.