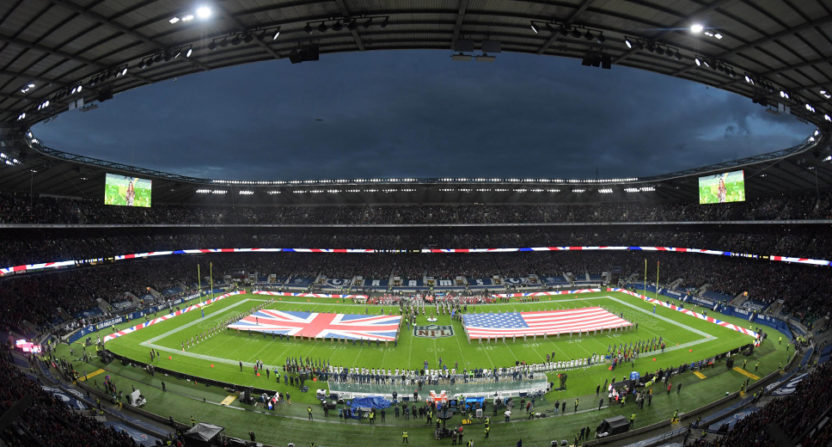 The NFL has been all about boosting its presence in the United Kingdom in recent years, pushing towards more and more games there and bringing in stadiums other than Wembley. But the extra overseas games have been criticized on several fronts, from players’ complaining about the travel and its effects on them to disapproval from teams and fans to discussions of these games’ effects on pre-game show ratings.

But a notable recent development, and one that might hurt the NFL’s plans of putting a team in London permanently, is a new YouGov survey suggesting that a whole lot of Britons don’t have much interest in the NFL.

A YouGov survey of 1,616 British adults ranked “American football” as the nation’s second-dullest sport to watch, with 59 percent of respondents rating it “very or quite boring,” while just 18 percent think it’s exciting. Only golf fared worse – a local game, to be sure, but one facing well-documented challenges finding new players and audiences. A full 70 percent find that sport painful to watch.

… The NFL is planning a big year in Britain after several years of steady growth. Rather than just one regular season game in London as happened between 2007 and 2012, the schedule has expanded, with London hosting four games in 2017. The lineup for 2018 will be announced on Thursday, and is expected to include the first at Tottenham Hotspur’s as-yet unfinished stadium in north London. The 61,599-capacity venue includes a retractable field designed specifically to accommodate the NFL, and a 10-year deal is in place.

And while the live fans are suitably enthusiastic about the action, the key to YouGov’s finding perhaps lies in viewers who can’t tell their quarterbacks from their cornerbacks. The NFL is broadcast only on pay-TV network Sky Sports with a weekly highlights show and the Super Bowl on the free-to-air BBC. Despite years of outreach and brief cultural breakthroughs (such as William “The Fridge” Perry), the game remains very much a minority sport.

Here’s the graphic from the YouGov survey:

It should be noted that games in London aren’t all about local fans and viewers. As we’ve covered before, a big part of the plan is actually about giving the NFL an extra national TV window (generally, a 9:30 a.m. Eastern start) in the U.S., and the broadcasts of these games have brought in significant revenue and viewers.

But that has downsides. The early games take away large numbers of viewers from the networks’ pre-game shows (which are quite important for advertising purposes), and it contributes to the general over-saturation of NFL broadcasts, which many (including CBS Sports chairman Sean McManus, in a rare public reversal) have cited as a significant factor in falling NFL ratings. So in addition to their struggles abroad, these games aren’t a guaranteed win at home, either.

All surveys should be taken with grains of salt, of course, and there are a few potential quibbles with this one. For one, these results are from people who have watched the sport in question, so even if they thought it was boring, they still count as viewers and may still watch again. (Even “boring” can be acceptable background noise sometimes, and that viewership still counts.)

For another, YouGov surveyed adults across Britain, and while their takes matter for local TV ratings, how Londoners in particular feel about the NFL is much more relevant to the attendance numbers for these games and to the potential for placing a team there permanently. And it should be noted that there have been many reports of these games seeing significant attendance from Americans who live and work in London, and they count too (and are probably less likely than Britons to declare American football “boring”). So one survey doesn’t necessarily mean the NFL’s UK strategy is doomed.

And it should be noted that there are significant reasons for the league to continue to try and tap international markets. Growth there on a number of fronts seems more likely than domestic growth, where it’s getting awfully hard to find new revenue streams or dramatically enlarge existing ones. But we can add this to the growing pile of evidence that there are problems with the league’s approach, and that growth in Britain isn’t necessarily as achievable or as much of a sure win as has been claimed.

The NFL has put huge resources into promoting the sport in Britain, and has done so for over a decade now; the first regular-season game in London was played in 2007, and at least one has followed every year. For their game to still be seen as “quite boring” by so many respondents isn’t a great validation of what they’ve done to this point. It might even rise to the point of telling the league, “Stop trying to make London happen. It’s not going to happen.”