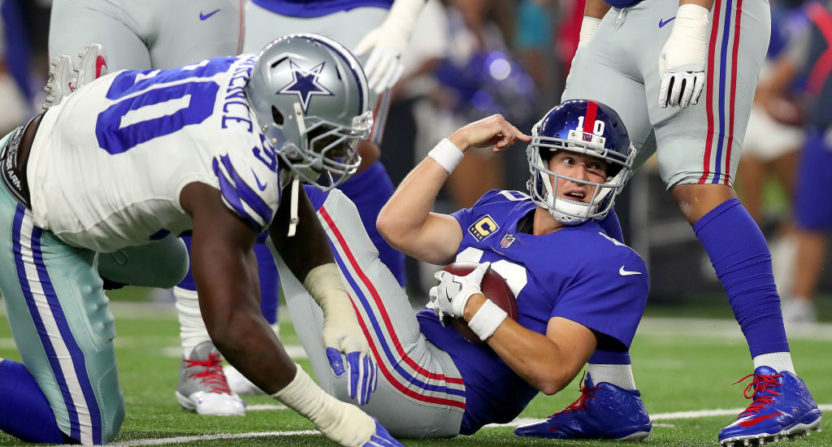 The NFL’s ratings have been a hot topic of discussion, but it isn’t always apparent just how much a dip may damage broadcasters’ bottom lines. That’s the focus of a Hollywood Reporter piece by Paul Bond and Georg Szalai published Wednesday, though, which features several Wall Street analysts discussing if NFL ratings will stay down and what they might mean for media companies’ bottom lines.

Here’s a look at the most important part, discussing the second week of the season being down 15 per cent year over year (and that’s from 2016, a year where ratings already fell 8 per cent overall from the previous year):

Guggenheim Securities analyst Michael Morris said he had been optimistic heading into the new season because audiences would appreciate some changes, including fewer commercial breaks and allowing players to creatively celebrate touchdowns. Now, though, he says, “early results do not support this optimism.”

Jefferies analyst John Janedis figures CBS, ESPN, Fox and NBC will generate about $2.5 billion in NFL advertising revenue this season, but a 10 percent shortfall could translate to a $200 million cut in earnings.

Since the NFL season opened Sept. 7, shares of NBC parent Comcast are off 9 percent, ESPN parent Disney has seen its stock drop 3 percent and shares of CBS are down 5 percent. Only shares of 21st Century Fox have risen in that time frame, up 2 percent.

“Continued declines in NFL ratings again this season will likely place further downward pressure on media stocks,” said Morris. He added, in fact, that “the NFL is an indicator of overall primetime programming ratings performance.”

Janedis’ projection of a $200 million cut in earnings across the four NFL broadcasters shows just how much of an impact any NFL ratings downturn can have on bottom lines. And that stock movement likely has something to do with it; of course, Comcast, CBS, Disney and 21st Century Fox all have tons of business ventures apart from the NFL or even sports in general, but a continued NFL downturn (especially after many forecast the league’s ratings would trend back towards its previous numbers this year) will have a significant impact on their revenues.

Morris’ point about the NFL as “an indicator of overall primetime programming ratings performance” is interesting, though. Yes, on some fronts, lower NFL ratings are related; some of the drop is thanks to cord-cutting and cord-shaving, and to people choosing subscription video services like Netflix, Hulu and Amazon Prime rather than watching traditional broadcast television. And it’s possible that a NFL downturn may be an indication that other TV shows will struggle too.

However, live broadcast ratings for non-NFL programming have already dropped substantially over the last decade-plus, with DVRs, on-demand programming and other competitors all playing a role there. That’s part of what led to the current wave of giant sports deals; sports programming is still something that’s consumed by a lot of people and mostly consumed live with ads, especially when it comes to things like the NFL, so there’s still value there for advertisers and broadcasters. And that’s an important element to keep in mind. NFL ratings dropping hurts, but if everything else drops as well, there may still be strong demand for advertising on NFL games. The NFL’s still the biggest sports broadcast property out there and the most-watched broadcast property in general, so it’s important to consider its position relative to other TV programming as well as its relationship to its own previous ratings.

The fears of NFL ratings staying low and thus affecting these media corporations’ bottom lines do seem to have a strong basis, though. There are plenty of reasons people are watching less NFL programming, and that trend doesn’t seem to be going anywhere, at least from what we’ve seen through the first couple of weeks. And as Janedis notes, if the numbers stay down, that is likely to hurt broadcasters’ ad revenues and earnings.

And on that front, keep in mind that the upfront NFL ad market was described as the “softest since 2008” in this June piece from Ad Age’s Anthony Crupi, meaning that lots of NFL ad inventory wasn’t sold in upfronts; that meant that broadcasters were betting on decent ratings and high prices, but ad buyers were betting on being able to get good deals later. They might be able to do that now. Add that into the make-goods that broadcasters have to offer if their ratings don’t hit promised levels, and this could be a costly year indeed for NFL broadcasters.