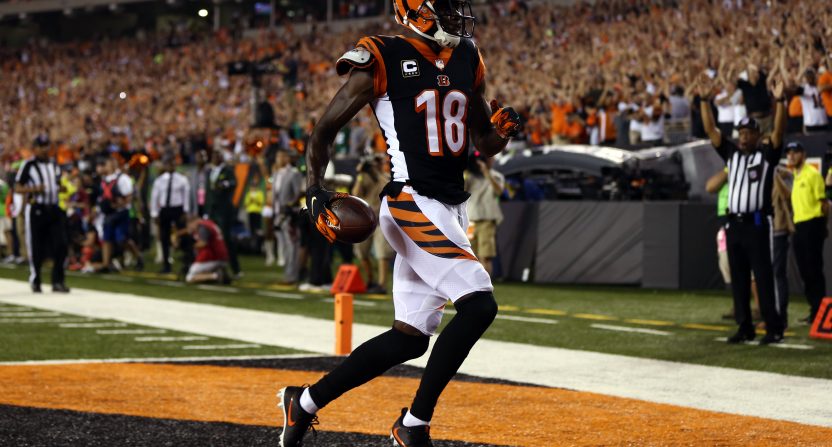 The NFL season is a week old, and ratings news continues to be…well, not ideal for the league. Last night was NFL Network’s first Thursday Night Football game of the year (exclusive or not), and the Ravens-Bengals matchup did not deliver strong viewership for the league. The premiere of the NFL Network’s Thursday Night Football season averaged 7.02 million viewers, down 13%, and a 4.2 household rating, down 14%, from 2017’s premiere, a Texans-Bengals matchup.

The league, on the other hand, wants you to know that the rating was up 16% and the viewership was up 15% from the average of 2017’s seven NFL Network exclusive TNF games.

Week 1 viewership for the league wasn’t impressive. The season opening game on NBC between the Falcons and Eagles drew an overnight of 13.4, which was down 8% from 2017 and marked the lowest  overnight rating for a season opener since 2008. Sunday Night Football hit a ten year low for it’s season opener between the Bears and Packers, down 9% in viewership from 2017’s Giants-Cowboys matchup. Monday Night Football’s doubleheader premiere this season was also disappointing, with Rams-Raiders notching 9.6 million viewers and Jets-Lions totaling 10.3 million. The late game ended up as just one of eight Week 1 windows since 2001 to fail to tally ten million viewers (and tied 2007’s 49ers-Cardinals game for the lowest-ever Week 1 MNF rating, a 5.9), and the early game was down 9% in both viewers and rating from last season.

The biggest winner from Week 1 ended up being CBS, whose single window was up 23% from 2017.

What will the rest of Week 2 hold for the league? The remaining two primetime games will likely be a mixed bag – Giants-Cowboys on SNF will likely draw a strong number, but Seahawks-Bears on MNF. probably won’t. Fox has an underwhelming slate of games in their singleheader, with Vikings-Packers as the best, most widely distributed game. CBS has a much better schedule, with Chiefs-Steelers standing out from the early window and Patriots-Jaguars airing in every market east of the Mississippi (and nearly all of Texas) in the late window.

As for TNF, the schedule doesn’t get better next week – the NFLN-exclusive series continues with a scintillating Jets-Browns matchup in Week 3.