On Thursday, an 8.2-magnitude earthquake struck off the coast of Mexico, killing at least 58 people. 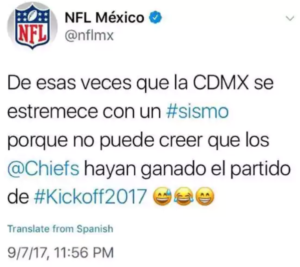 Translated into English, the tweet says, “Those times that Mexico City shakes with an earthquake because it cannot believe the Chiefs have won the #Kickoff2017 game.”

Obviously no one was hurt by that tweet, but it sure seemed odd for a league account to joke about a deadly earthquake, with emojis and all. The NFL is trying to grow its already-sizable audience south of the border, and making light of a natural disaster is an ineffective—if not offensive—way to do so.

Understandably, the tweet sparked some backlash, leading the NFL Mexico account to take it down. The following morning, NFL Mexico apologized, calling the tweet “unacceptable” and saying it does not represent the league’s values. “We reiterate our solidarity with Mexico,” it said.

The NFL Mexico account tends to share the same type of inoffensive stuff the main NFL account does: highlights, stats, score updates, retweets of team accounts. Next to all those banal tweets, the one about the earthquake seems quite out of place. Is it possible someone tweeted from the wrong account by accident? Was it some kind of prank? Or did a social media staffer just made a bad decision? Regardless, the tweet is gone, the apology has been issued, and the NFL goes on.