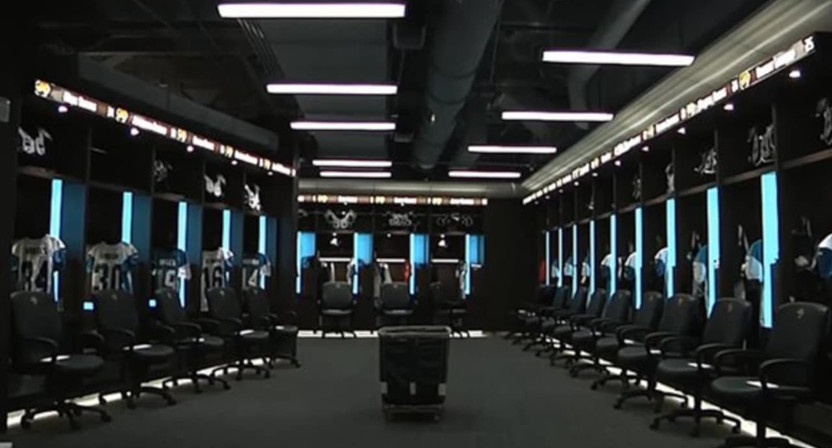 The COVID-19 pandemic has prompted all sorts of changes to sports media policies, including limitations on who can interact with players in person. There’s been some logic to that when it comes to policies surrounding in-person interviews for vaccinated media members only (now required across the NFL, MLB, the NHL and more), and when it was about closing locker rooms to everyone and making all media interviews virtual (especially during the pre-vaccine days). However, there’s been some controversy when it comes to teams and leagues opening up extremely selective “media” access only for those employed by the team and/or league (or a media project with league involvement), and the latest on that front is the NFL.

Last season, the NFL closed its locker rooms to everyone in the media, whether they worked for the league (NFL.com and/or NFL Network), the team, or an independent outlet. The locker rooms were limited to 40 team staffers, and interviews were conducted virtually. This year, the locker rooms will remain closed to most media (we discussed this as a likely outcome back in June), but they’re expanding the limit of who can enter to 50. And while even NFL.com, NFL Network, and team radio employees are still kept out, this expansion will now include up to three team-employed PR/media people, as per Charean Williams at Pro Football Talk:

…The locker room will remain closed to all media not affiliated with the team, including broadcast partners, NFL Films, NFL Media and flagship radio.

A maximum of three people from a team’s public relations department/team-affiliated media are allowed in the locker room postgame while players are present.

Non-team-affiliated media has not been inside NFL locker rooms since the 2019 season. Instead, teams have utilized interview rooms/areas and video calls for coach and player interviews since the pandemic began.

The 2021 media access policy, though, encourages teams to accommodate requests from non-team-affiliated media for one-on-one interviews outside the locker room during the week and postgame. It remains to be seen how well it’s going to work, with some teams surely eager to use the exclusive locker room access to their benefit.

Some media members have posted notable criticisms of this, including Rick Stroud of The Tampa Bay Times:

And Stroud’s quite right on at least one front. There’s nothing making these team-affiliated media any “safer” to have in a locker room than fully-vaccinated independent media members. There is an argument that returning to the 2019 levels of locker room media access is perhaps slightly more dangerous, as that’s bringing more people in contact with players (and while breakthrough COVID-19 infection and transmission both remain rare compared to the numbers seen with unvaccinated people, that’s still possible). But there’s nothing that makes it “safer” for the three people allowed in to be team personnel rather than independent media, so that makes this an actual access restriction for independent media versus team media and PR staff.

And there isn’t a binary restriction here where it has to be “team employees” or “no one.” If the concern was the 50-person limit, it would be quite possible and far better from the media side to allow three randomly-selected media members (including team-employed media members) to access the locker room each game. Or if there were really safety concerns here, the league could just stick with the 2020 policy of allowing no media in the locker rooms, team-employed or not; that at least would provide a fair playing field between team employees and independent media. Instead, this is a huge access advantage for the people who work for the teams.

With all that said, though, the NFL is not compelled to work for the benefit of the media, especially at a point in time where the (non-broadcast) media appear to need the NFL much more than it needs them. The NFL obviously needs the broadcasters willing to pay it giant rights fees, but it’s unclear how much value the league actually gains from coverage from newspapers, magazines, and digital sites that don’t pay it for that privilege.

Yes, independent media coverage helps get the league talked about. And there’s probably some value there in getting more casual fans to tune into or even attend particular games, but even if the NFL hypothetically killed all independent media access of all kinds right now (they’re obviously not going to; it’s a thought experiment), it’s hard to see it dropping off the sports radar as long as it was still broadcast. The NFL is the biggest sports league in the world, and the biggest blow they would take likely wouldn’t actually be from reduced coverage (especially as most media outlets would probably figure out ways to cover the league with less or no access), but from backlash to their media dealings. And that might not last that long. For the moment, though, it still seems to serve the NFL to provide some level of independent media access. (And they still provide more than some leagues, particularly the English Premier League.)

And that’s where this particular move looks like a PR blunder by the NFL, at least in the short term. The “no media in the locker room” 2020 policy was defensible on COVID safety grounds, but more importantly, it was fair to team-employed and independent media. A lottery for which members would be allowed in would also be fair. Selecting team-employed media only is not fair, and it seems unlikely to provide much of a short-term boost.

Of course, those team-employed media will get some exclusive quotes from their locker room access. But it’s doubtful that those quotes are going to really make a significant difference to boosting team website traffic relative to independent coverage, especially as so many quotes from players and coaches these days say so little. Good NFL coverage in 2021 requires a lot beyond obtaining quotes, and the talented media members not allowed into locker rooms will still find ways to get the job done (as they did all of last year).

And we’ve already seen some media and fan backlash to this new NFL policy, and there will probably be more of that in the days ahead. There also may be more skepticism for the team-employed writers and their increased level of access, and less desire to read what they’re writing. So it’s the NFL creating a negative story that they had no need to, and one that’s unlikely to provide them with much immediate benefit.