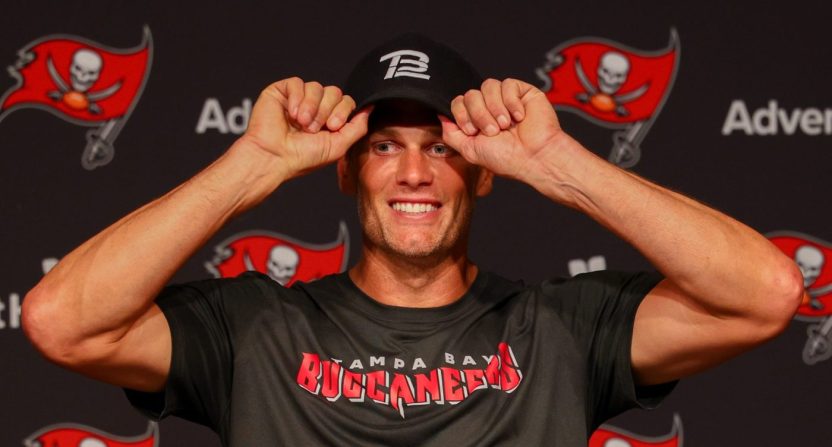 While most sports fans spent last Friday enjoying the thought of Tom Brady on The Masked Singer, Yahoo’s Charles Robinson was thinking about those poor Tampa Bay Buccaneers writers.

On the latest episode of Robinson’s You Pod to Win the Game podcast, Yahoo’s Senior NFL Insider tore into the Brady-Masked Singer rumor and mocked every aggregator for running with the story.

“I am so f*cking sick of what we have to do in our jobs now,” Robinson said. “Because some a**hole on Reddit says ‘Hey, ya know? Tom’s not with the Buccaneers and I found some dates where The Masked Singer’s trying out people for episodes…I don’t actually have any proof, it’s just me totally pulling this out of my a**, but I’m gonna go ahead and post it on Reddit.’ And guess what? It’s gonna actually become a STORY.”

“The poor Buccaneers writers,” Robinson continued. “Who actually had to call Fox and go ‘yeah, this is ludicrous, but this is the day and age we live in. So I gotta call you and ask.’”

Wait, Buccaneers writers had to take time out of their day to call Fox? On a Friday afternoon, in the middle of the summer? Well, that changes everything. Those poor writers, indeed!

Shame on Reddit, shame on aggregators, shame on me, shame on all football fans for having fun with a rumor that was always portrayed as just that, a rumor. I promise, we didn’t realize the agony we were putting those Buccaneers writers through. But now that I know, I only hope even more that somehow this rumor proves to be true, to ensure that those Buccaneers writers were not wasting their time by calling Fox on a Friday afternoon in the middle of August.

I know the narrative of why Brady missed time from training camp has shifted away from the rumor that he was a contestant on Fox’s secret celebrity singing competition. But what did we expect? That Brady was going to return to Tampa and announce that he did take 10 days off to be on The Masked Singer? Ruining any potential surprise and the entire scope of a hit show on Fox, the network that will soon be paying Brady $375 million to be their lead NFL analyst and ambassador.

This wasn’t just a random rumor that some Redditor posted without supporting details. The Redditor made an incredibly compelling argument. Brady’s relationship with Fox, Joe Buck previously being a contestant on the show, the dates that Season 8 was taping, the fact that it needed to be a secret and the Bucs were oddly vague about why Brady was missing time. Everything aligned.

TMZ even recently released a clip from Season 8 of The Masked Singer where judge Ken Jeong guesses one of the contestants was Peyton Manning before jumping to Brady.

“Or, I think this could be the greatest of all time,” Jeong says in the clip. “He just got fined for not showing up to training camp because he is here on The Masked Singer. This is seven-time Super Bowl winner Tom Brady. Tom, welcome to The Masked Singer!”

Naturally, the clip gets cut off before the answer is revealed. Could this be Fox attempting to capitalize on rumors about their ambassador being on the show? Sure. But for anyone to just dismiss the compelling theory and act like this August rumor was some sort of curse on the current state of sports journalism, is a little excessive.

[You Pod to Win the Game]