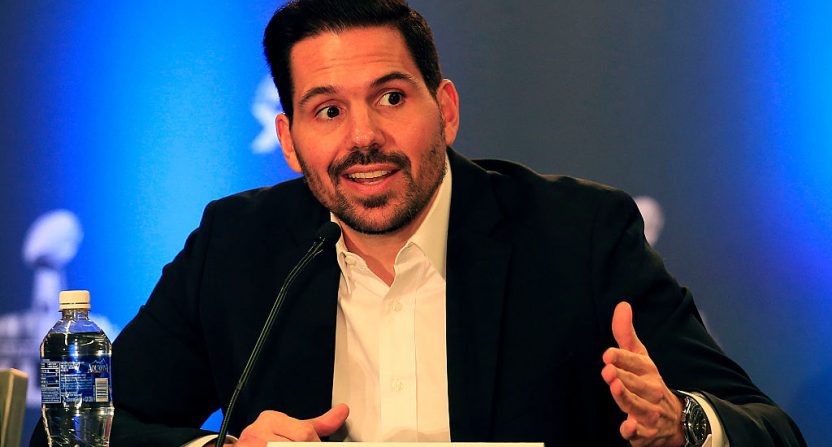 He succeeded Mike Pereira as the NFL’s vice president of officiating in 2013 and now he’s expected to follow Pereira to TV by becoming a rules analyst. ESPN’s Adam Schefter reports that Blandino is ready to leave the National Football League and go to a network. He’ll leave his position on May 31.

NFL's VP of officiating Dean Blandino is expected to pull a Romo and go into TV a la @MikePereira, per sources. More money, less stress.

CBS is the likely landing spot for NFL Sr. VP of officiating, Dean Blandino, per sources.

Here is the memo that went to all 32 NFL teams this morning: pic.twitter.com/q03OxMg3xz

And as Schefter tweeted, Blandino seemed likely headed for CBS after the Mike Carey Experience ended following Super Bowl 50. But for its part, CBS says the reports of it hiring Blandino are not true:

CBS Sports: "We are not looking to fill the rules analyst position, and we are not having discussions with Dean Blandino."

Football Zebras said ESPN is the network where Blandino is likely to land:

Conflicting reports that Blandino will/will not land at CBS. Our sources say ESPN luring him for CFB games in 2016https://t.co/gu7C4uX1Cf

But Pro Football Talk now says Blandino will apparently go to Fox where he will tag-team with his predecessor, Pereira:

Crazy morning: PFT has now learned that @DeanBlandino likely will be hired by FOX — and that FOX would team him up with @MikePereira.

Blandino was supposed to become the NFL’s point man to review all replays from the league offices. There was concern that he would do the replay reviews without having experience as an on-field official. But apparently the lure of going on TV to review the reviews and not have pressure to decide games was enough for Blandino to leave the NFL and thus, he made the surprise move for a network.

Mike Pereira became the original rules analyst when Fox hired him away from the NFL and he became quite successful. CBS was hoping to get lightning in a bottle with Carey, but the exact opposite occurred.

With Blandino leaving, it leaves the NFL with a hole to fill and it will have to hire someone else to do the replay reviews. His departure certainly was unexpected, but apparently the opportunity to stay in the game and be on television was too big to ignore.

It’s going to interesting for Fox to have two former NFL heads of officiating on one network.