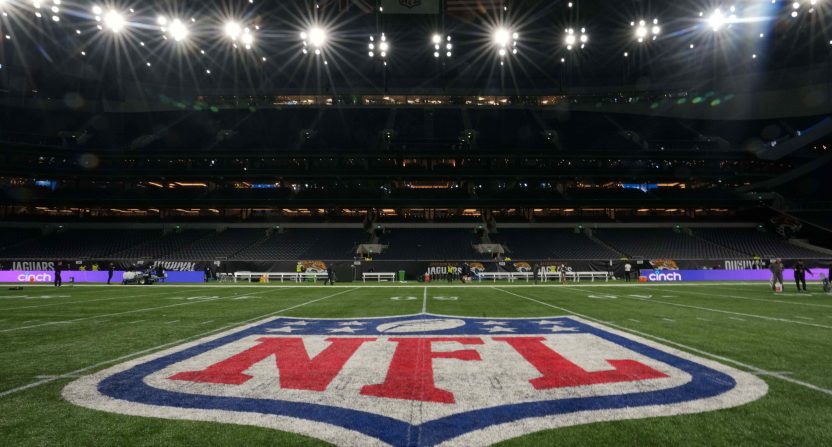 A few weeks back we covered the NFL considering Apple as a possible partner for a major rights and equity acquisition.

Now, though, a new report mentions a different tech/entertainment giant in the mix: Netflix.

That’s via Daniel Kaplan at The Athletic, who reports that Netflix was mentioned as a company the league has engaged in talks on their remaining outstanding media packages and offerings.

The NFL is considering selling equity in NFL Films separately from its long-marketed minority stake in NFL Media, said sources who were briefed on the efforts last week at the annual owners’ meetings.

A list of the media companies the league has talked to for the NFL Media process was presented on a slide at the meeting and included Netflix, the entertainment streamer that has avoided live sports.

Netflix of course is less likely to be a player for properties like NFL Sunday Ticket, which both Apple and Amazon have pursued aggressively. Amazon obviously is getting into the NFL business in a bigger way with their Thursday Night Football rights, while Apple has moved strongly into live sports with their MLB Friday Night Baseball package.

For Netflix, though, the appeal is probably more on the documentary side. To that end, Kaplan’s report posits that the NFL might consider making their NFL Films division their path to getting into business with Netflix.

“If you think about NFL Films … it’s a robust library with documentary power,” said a team official who was in the room for the presentation. “You could see ‘Hard Knocks’ and all of those things being sold similar to Formula One or PGA [Tour] right on a Netflix service.” Netflix is developing a reality series around the PGA [Tour].
“The reason I say Netflix is because some of the examples (the NFL executives presenting) gave were … that there’s a lack of quote-unquote, sports content, not games, but sports content, long-form, short-form, similar to a ‘Drive to Survive,’ right now you have the Showtime Lakers thing.” HBO Max is airing a series based on the 1980s Los Angeles Lakers.

There’s been anecdotal evidence suggesting the NFL is really interested in the rise of Formula 1, and there’s no denying that Netflix’s massive global base of subscribers would appeal to a league that has made no secret about its desire to be an international brand.

I know what I'm about to say sounds extremely fake but I promise a handful of very notable NFL execs/GMs/coaches asked me this week to explain F1 at the owners' meeting becasue either they want to get into it, their kids are into it, or they just wanna know how it got so big.

Considering the NFL’s strategy is pretty clearly focused on spreading their distribution around to as many options as possible, finding a way to split their remaining package between Apple and Netflix might be their ideal outcome. For Netflix, it would be getting on board with one of the biggest sports properties in the world, even if for now it would be a more limited partnership.

These discussions aren’t expect to conclude any time soon, though, so there’s plenty of time for the situation to change.