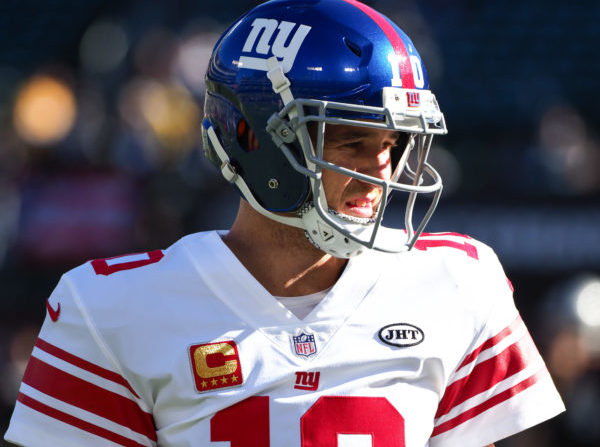 Just four more weeks of the 2017 NFL regular season remain and the push for the playoffs is really beginning to heat up. For Week 14, there are a number of matchups on the schedule that will certainly play a part in how this year’s postseason bracket will look. Six games in particular feature a matchup between two teams that are currently in contention to make the playoffs this season.

For everything else that will be going on in Week 14, we just happen to have this convenient guide featuring the full game schedule, the announcers for each matchup, and their respective TV maps.

Saints notes – When New Orleans heads to Atlanta on Thursday, they could be taking the field without one of their top two running backs this season. Mark Ingram has missed two practices this week with a toe injury and the Saints may decide to rest the veteran running back so he can get as healthy as possible for their final few games of the year and the playoffs.

Falcons notes – After being without their services last week in a loss to the Minnesota Vikings, Atlanta will get corners Brian Poole (back) and Desmond Trufant (concussion) back on the field against New Orleans. The Falcons still only allowed 227 pass yards to the Vikings last week, but their defense is definitely much better with Trufant and Poole in the lineup.

Bills notes – Once AFC East rivals with Indianapolis before the division realignment in 2002, Sunday’s matchup will be only the sixth time Buffalo has faced the Colts since 2003. Three of these games have been played inside the Bills’ home stadium and the last two to take place in Western New York have resulted in a Buffalo victory.

Cowboys notes – If Dallas is going to have any chance at making the playoffs this year, they will likely have to win all four of their final games. With three of the four coming on the road (including a Week 17 matchup with the Philadelphia Eagles), the difficulty level is certainly high for the Cowboys to win the rest of their games this year and get into the postseason.

Giants notes – In their first game since firing head coach Ben McAdoo on Monday, New York will be placing quarterback Eli Manning back in the starting lineup this week. In support of Manning, it is being reported that around 25 former teammates of the Giants quarterback will be attending Sunday’s game and wearing his jersey.

Lions notes – With the team needing to win their remaining games this season, there is a possibility that Detroit could be without quarterback Matthew Stafford this week due to a hand injury. Known for being a pretty tough player, Stafford will likely take the field on Sunday, but his injury could definitely affect how well he plays.

Bucs notes – For the first time in his NFL career, Tampa Bay wide receiver Mike Evans could be in jeopardy of not finishing the season with at least 1,000 receiving yards. Evans currently has 735 yards so far this year and needs to average about 67 receiving yards per game over the next four weeks to get his final amount over 1,000.

Raiders notes – Since he was drafted by the team in 2014, Oakland quarterback Derek Carr has never led the team to a win in Kansas City. In fact, the last time the Raiders won a game on the road against the Chiefs was back in 2012 when Carson Palmer was the guy under center for Oakland.

Chiefs notes – In their attempt to avoid a seventh loss in their past eight games on Sunday, Kansas City will now have to take the field without cornerback Marcus Peters. After throwing a penalty flag into the stands last week, the Chiefs decided that Peters deserved a punishment for his actions and suspended the corner for this week’s game against the Raiders.

49ers notes – In his first start for the team last week, quarterback Jimmy Garoppolo was able to lead San Francisco to a victory over the Chicago Bears. Not even former 49ers greats Joe Montana or Steve Young lead the team to a win in their first ever starts under center for the franchise. So obviously Garoppolo’s bust for the Pro Football Hall of Fame is already being constructed.

Texans notes – After their loss to the Tennessee Titans last Sunday, any remaining hope Houston thought they had of making the playoffs went straight out the door. The Texans’ loss last week also clinched the team not having a winning record for the first time ever under head coach Bill O’Brien.

Browns notes – After falling to the Los Angles Chargers last Sunday, Cleveland has now lost 27 of its last 28 games. With the loss, the Browns are the now sole owners of having the most losses during a 28-game stretch in the history of the NFL.

Bears notes – Thanks to Cairo Santos being lost for the rest of the season to a groin injury, Chicago was forced to sign their third kicker of the year this week. Former Dallas Cowboys and Cincinnati Bengals kicker Mike Nugent is the guy that has been brought onboard by the Bears to replace Santos.

Bengals notes – A day after receiving a one-game suspension from the NFL for his helmet-to-helmet hit on Pittsburgh Steelers receiver Antonio Brown last Monday, Cincinnati safety George Iloka found out on Wednesday that his suspension had been voided following the player’s appeal. Iloka will be out on the field Sunday for the Bengals matchup with Chicago.

Vikings notes – With their win over the Atlanta Falcons last week, Minnesota has now won eight games in a row during a single season for the first time since 1998. This year’s Vikings team hopes to be more successful than the one from 1998 that fell just short of the Super Bowl when they lost in the NFC Championship.

Panthers notes – Veteran Carolina defensive end Julius Peppers has quietly been having a pretty impressive season. Despite only starting one game for the Panthers this year, Peppers has still managed to rack up 8.5 sacks, 27 total tackles (seven for a loss), and has even forced two fumbles.

Redskins notes – It has been a tough season for Washington in 2017, as it appears they will miss the playoffs for the third time in Jay Gruden’s four-year tenure as the team’s head coach. With rumors of Kirk Cousins signing elsewhere this offseason, the Redskins may very well begin the 2018 season with a brand new quarterback and head coach.

Chargers notes – Not many teams this year have been hotter than Los Angeles since Week 5. The Chargers were counted out by a ton of people after beginning the season 0-4 (understandably), but they have now won six of their last eight and are tied for first place in the AFC West.

Jets notes – It seems like the end may be near in the NFL for New York running back Matt Forte. He is on pace for his lowest total yards from scrimmage during a season in his entire career and it will only cost the Jets a cool $1 million to release the running back this offseason.

Broncos notes – Despite only being in his first year as Denver’s head coach, there are already some whispers that the team may move on from Vance Joseph after the season. Some may wonder why the Broncos would give up on Joseph so quickly, but the team losing eight games in a row and finishing with a losing record this year for the first time since 2010 is not something this organization is too thrilled about.

Titans notes – For the first time in two weeks, Tennessee could have their top receiver back on the field this Sunday. Titans wide receiver Rishard Matthews has missed the team’s last two games with a hamstring injury, but he has reportedly been saying that he expects to play this week.

Cardinals notes – Arizona has only played in one game this year in which they did not turn the ball over at least once (Week 3). The Cardinals have actually only had two turnover-free days in their last 21 games dating back to 2016.

Eagles notes – A big reason why Philadelphia lost last week and had their nine-game winning streak snapped was due to their inability to run the ball. The Eagles had rushed for 100 or more yards in their last 10 matchups, but Sunday night saw them only gain 98 yards on the ground and running back Jay Ajayi led the team with just 35 rushing yards.

Rams notes – After their win over the Arizona Cardinals last week, Los Angeles clinched their first winning season since 2003. So the last time the Rams finished a year with a winning record, their current quarterback, Jared Goff, was nine years old and Beyoncé released her very first solo album.

Seahawks notes – As they prepare to take on one of the NFL’s best rushing offenses on Sunday, Seattle’s defense is more than capable of taking on a talented ground attack like Jacksonville’s. In the Seahawks’ last 21 games, only Tennessee Titans running back DeMarco Murray has rushed for 100 yards or more against Seattle’s defense.

Jaguars notes – During the 2017 season, only one quarterback has been able to throw for at least 300 yards against Jacksonville’s defense. Pittsburgh Steelers signal-caller Ben Roethlisberger finished his Week 5 matchup versus the Jaguars with 312 passing yards. However, Roethlisberger also tossed five interceptions and Jacksonville walked out of the building with a win.

Ravens notes –  For only the second time in his career, it is very possible that Baltimore quarterback Joe Flacco could finish a season with more interceptions than passing touchdowns. Flacco has currently thrown 11 touchdowns and 11 interceptions so far this year with three upcoming matchups against AFC North opponents that he has a history of throwing picks against.

Steelers notes – Through 12 games this year, Pittsburgh wide receiver Antonio Brown already has more receiving yards (1,296) than he did in 15 games last season (1,284). The Steelers’ talented pass-catcher has not had a year with under 1,000 receiving yards since 2012.

Patriots notes – On Monday, New England will be attempting to win their 15th straight game on the road. Their 14 road wins in a row are already a team record and the Patriots are just four games behind the all-time NFL record for consecutive road victories held by a San Francisco 49ers team that won 18 matchups on the road from 1988 to 1990.

Dolphins notes – In their last 15 games against New England, Miami has come away with a win in just three of them. All three of these victories over the Patriots since 2010 have come at the Dolphins’ home stadium, which happens to be where Monday night’s matchup will be taking place.