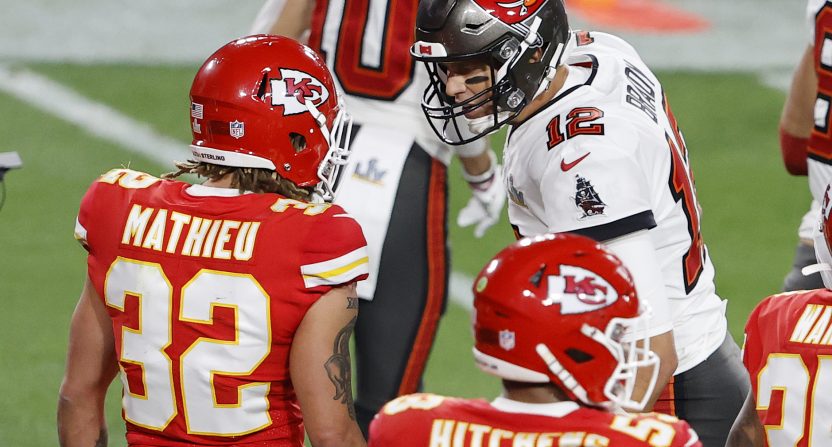 After the Tampa Bay Buccaneers scored their third touchdown of the first half, Tom Brady and Tyrann Mathieu had a rather tense exchange which led to Brady saying something to Mathieu. It seemed like a normal heated moment between two competitors until Mathieu tweeted (and then deleted) that Brady called him something he “won’t repeat,” leaving many to automatically assume the worst and think Brady called Mathieu some sort of racial slur.

Considering the Super Bowl is the biggest game of the year, there are cameras and mics all over the place that what was said was picked up. The NFL could then release what was said, we can hear what was said, and we can move on. That would make the most sense but NFL Films apparently didn’t see it that way.

According to Pro Football Talk, NFL Films is choosing not to release the audio clip of the Brady/Mathieu exchange. According to PFT’s source, “NFL Films typically does not reveal the audio of such squabbles between players.”

This might have a logical purpose in other situations but it doesn’t take much to explain how bad of a look this is. Sure, there’s an argument to be made that by not playing into Mathieu’s claim, you don’t give it credibility. The problem is that Pandora’s Box has already been opened. This isn’t some random person accusing Brady of potentially saying something horrific toward them, this is an All-Pro Super Bowl winning safety who posted what he posted to 1.2 million followers. Add in the fact that Brady privately apologized to Mathieu for several verbal altercations and it really looks like the NFL is trying to hide something. Something that likely isn’t as bad as people think that is.

The only clues we have of what was actually said was Michael Irvin telling Rich Eisen that after listening to the clip, Brady didn’t call Mathieu a racial slur and PFT’s source indicating that the clip “included nothing stronger than the typical profanity heard throughout any NFL game.”

Look, I love NFL Films. As a child, NFL Films made me a bigger football fan and I still love what the Sabol family has done. But in situations like these, it really shows that NFL Films is merely a PR arm of the National Football League. Instead of just releasing the audio and inserting whatever bleeps necessary, the NFL is making this a much bigger story than it needed to be.