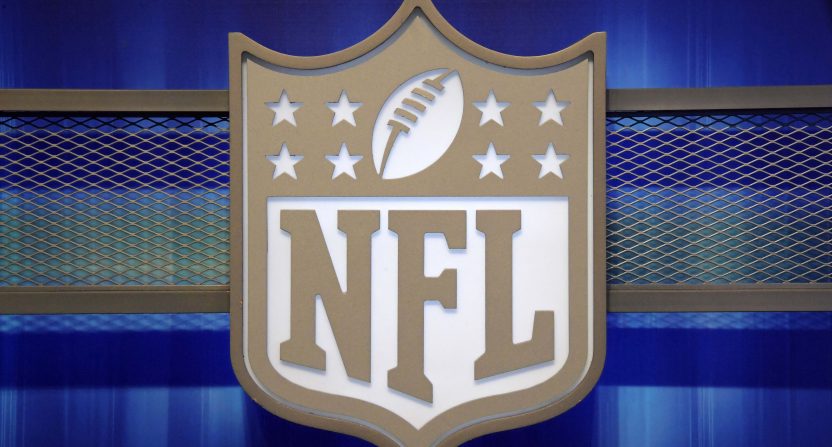 Some significant changes are coming to the NFL’s broadcasting setup this fall. As Grant Gordon writes at NFL.com, that includes getting rid of the single-header rule (update: or maybe not entirely!), altering the start times of games during the divisional playoffs, and altering the numbers of ad breaks during each quarter of the Super Bowl. Here’s the initial version of Gordon’s piece.

At Wednesday’s Spring League Meeting, it was announced that Divisional Round games on Sunday will be moved back to 3 p.m. and 6:30 p.m. EST. They had previously started at 1:05 p.m. and 4:40 p.m. and will now match the start times for the conference championship games.

In addition, the single-header rule has been eliminated, so every market will get three games during Sundays in the regular season. This is especially impactful for markets with multiple teams such as the Bay Area with the 49ers and Raiders, Southern California with the Rams and Chargers and the Washington D.C. area with the Redskins and Ravens.

Lastly, the Super Bowl previously featured five commercial breaks per quarter, but will now have four.

Here’s what that single-header text then looked like later: “In addition, the single-header rule has been eliminated as a one-year test, so every market will get three games during Sundays in the regular season.”

And a pair of tweets from Sports Business Journal‘s Ben Fischer seems to suggest the NFL may walk that back even further:

Urgent: NFL is now clarifying this, saying they'll let this happen "up to two times" this season in each market, to see how it goes. Team can do it more than twice if they want.

efficiently said! One thing: NFL officials made something clear later on that wasn’t clear at first: This will be a test run, teams can say no to this happening more than 2x this year. Effects will be studied to make sure there aren’t any problems

As Fischer notes, the reduction in single-headers is definitely going to be a source of joy for a lot of fans in those markets with multiple teams.  That rule has meant that there have often only been two games available on TV in those markets, an early one and a late one, meaning that fans without Sunday Ticket don’t get a choice in what to watch. Changing that rule should make some better games more available.

The time change for the divisional round games is also interesting, as unlike some recent debates about time slots in other sports, this hadn’t really been a subject of much public discussion. But perhaps the league has data that suggests the later time slots will do better (the regular-season late-afternoon and evening games do tend to perform better than the 1 p.m. ET kicks), or maybe they just wanted consistency between the divisional and conference final rounds.

Meanwhile, the Super Bowl change doesn’t seem like that major of a move, especially as they’re probably going to just make those four breaks longer (that’s an approach the NFL and other leagues have been using for a while now) rather than reduce the amount of commercials. But that could have some benefits for fans, too, especially fans who don’t care about Super Bowl commercials; there now might be better in-game opportunities to use the washroom or grab a snack without worrying about missing game action. (We’ll see how that goes over with advertisers, though.) So all in all, these seem like some reasonable broadcasting changes, and the reduction of single-headers in particular seems like a clear win for fans. But it may not be as much of a reduction as the league first indicated.