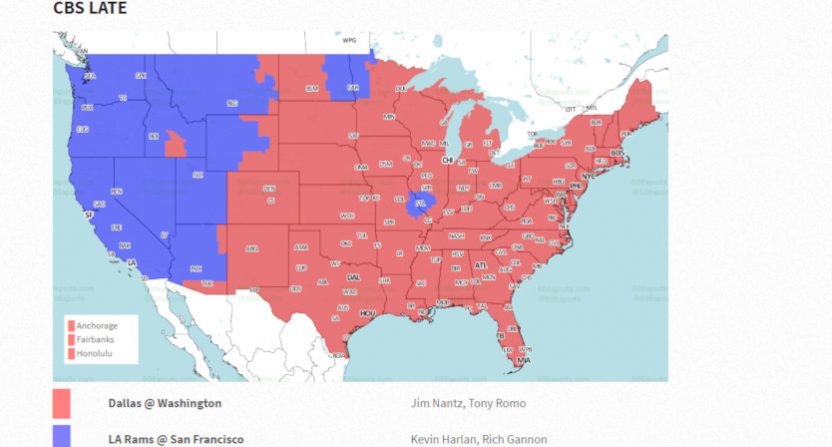 There’s been a lot of discussion recently about what could happen in the next round of NFL TV rights deals, including the idea of ABC or Turner getting involved. But a Variety piece from Brian Steinberg that covers the upcoming rights negotiations in general (ESPN’s Monday Night Football deal expires after the 2021 season, while the CBS, Fox and NBC packages expire after the 2022 season) is most notable for what it leads with; that there have been discussions about changing how the league’s Sunday afternoon packages (currently with CBS and Fox, with the CBS package focused on AFC games and the Fox one focused on NFC games) work.

The NFL and some of the media companies that broadcast some of its most-watched matches have considered the idea of shaking up the Sunday-afternoon packages that regularly air on CBS and Fox, according to two people familiar with the matter. Under one idea broached, the two networks could get to air packages that include games from both the NFC and AFC, as opposed to the current system, which keeps the NFC on Fox and the AFC on CBS. The talks are extremely preliminary, one of these people cautions, and may not come to fruition.

Spokespersons for the NFL, CBS Sports and Fox Sports declined to comment.

There already have been moves to weaken the rigid conference affiliations of these packages, particularly the move to bring in the crossflex rule in 2014. That’s led to some solid ratings, including a Week 7 ratings win for CBS this year after they picked up Cowboys-Redskins and Rams-49ers. (Those coverage maps are shown above, from 506 Sports.) And additional moves away from the conference affiliations could help ratings further; if the best matchups in a particular week are heavily slanted to one conference or the other, why not have those more widely shown?

Of course, removing the conference affiliations for the afternoon games would require an alternate system for networks to pick who gets what, but that’s worked out just fine in college football in a variety of forms. One that might work is something along the lines of the current Big Ten model; Fox and ESPN split the football rights in terms of numbers of games, but Fox pays more to get first pick of the games for most weeks (ESPN gets it in some weeks), letting them get giant games like Ohio State–Michigan. If the NFL can convince either CBS or Fox to pay more to get pick priority most of the time, that could bring in even more revenue for them. Or, if one network isn’t happy with always picking second, the NFL could charge both the same and just have them alternate weeks where they get first pick.

Shaking up the conference affiliations is what’s specifically discussed here, but it’s possible that the league could make even more dramatic changes to the afternoon windows, especially when it signs new TV deals. It’s not guaranteed that both CBS and Fox will be back as partners (although both seem very eager to do that, understandable considering how NFL ratings still outperform everything else on broadcast TV). There’s also no guarantee that CBS and Fox would keep their current slots, especially with all these other rumored bidders.

It’s also possible that the next round of afternoon packages could include more choices of games, especially if another network like ABC or TNT gets involved; we could conceivably even see something like Sunday afternoon doubleheaders on all of CBS, Fox and TNT. There are drawbacks to that idea too, of course, including the dilution of audiences for individual games (but more total eyeballs on the NFL’s product, and networks paying for the privilege to show more games nationally) and the weakening of Sunday Ticket (but its future already seems uncertain), and the tradeoffs would have to be considered, but there are options to change the NFL afternoon broadcasts even more dramatically than what’s being specifically discussed here.

And it’s notable that Steinberg’s piece talks about “the idea of shaking up the Sunday-afternoon packages” and then mentions the end of conference-affiliated packages as “one idea broached.” That means there could be other shakeup plans that are being talked about, but haven’t been reported yet. We’ll see if the talks lead to anything; they’re “extremely preliminary,” after all, and the NFL and the networks may eventually decide to stick with their current Sunday afternoon setup. But it’s certainly interesting to hear talks about changing the afternoon setup, whether that’s with removing conference restrictions or with something even more radical.