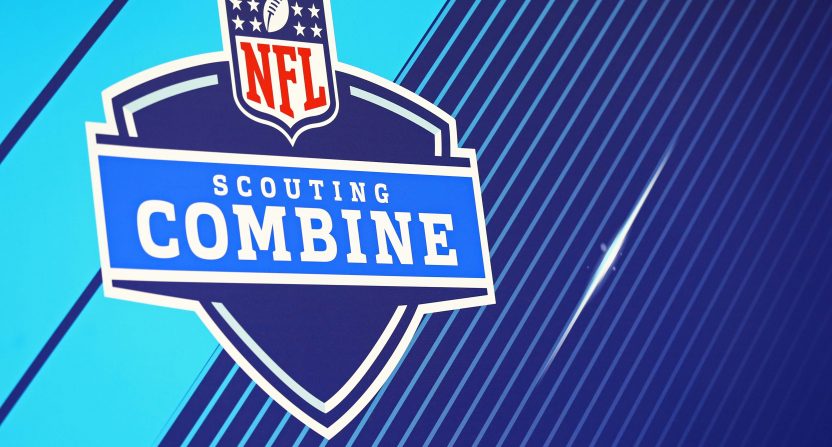 It seems we haven’t yet hit the upper boundaries of the NFL’s attempts to make everything it does a primetime television event. From the 2009 move of the schedule release to primetime to the 2010 move of the draft’s first round to Thursday primetime to recent simulcasts of the draft on broadcast networks Fox and ABC to bumping Sunday divisional playoff games back towards primetime, the league loves getting its content in that primetime window. And they’re now set to do so with televised drills from the NFL scouting combine.

Herbie Teope has a NFL.com writeup of the changes coming to that event:

The league’s annual pre-draft evaluation tool will return to Indianapolis through 2021 followed by a series of annual options, NFL Network’s Judy Battista reported.

The announcement of the NFL Scouting Combine staying put for now also comes with changes surrounding on-field drills. Starting in 2020, the televised drill portion of the combine will shift from the morning and afternoon to the afternoon and prime-time slots on Thursday, Friday and Saturday, Battista reported.

“We are always looking at ways of bringing more football to a wider audience,” the league said in a statement to NFL Network. “This will enable us to accomplish the goal of reaching more fans while still fully maintaining the football integrity of the event. We will adjust the schedule to ensure a positive experience for the players and clubs.”

There does seem to be some logic to this. While many NFL fans don’t care about watching prospects’ combine workouts (even some of the draft-focused fans would rather just get the times and results than watch them happen), there certainly is a group that does. And not all of those fans are presumably able to watch morning drills live, so shifting them to later in the day should lead to an increased audience.

How much that audience will increase is debatable, but there’s certainly at least some appetite for any and all NFL content (see how much attention the schedule release gets every year). And putting content that at least some people are interested in at a time where more of them will be able to watch it makes some sense, especially as this isn’t specifically replacing anything else (it’s presumably sliding in to what was just analysis and discussion beforehand; the actual tests should draw more of an audience than that).

But this is a further example of how much the NFL pendulum has swung towards TV. Events like the draft, the schedule release, and the combine were all initially intended as internal operations for the NFL’s teams, not forward-facing operations for fans. And league officials have even been bemused at times that anyone would watch these things. Consider this from Barry Wilner’s Associated Press piece last month on the draft’s evolution:

Desperate for programming, ESPN hired Bill Fitts, who had worked games on CBS and NBC, as producer of the draft show, which Fitts admitted in “On The Clock” was rudimentary.

“I would say at the beginning it was like with our golf coverage — we started covering one hole,” Fitts said with a laugh. “Look what it went to.”

It would not be an exaggeration to say the draft has exploded beyond the selection meeting tag the league hung on it.

And while the draft may be the biggest case there, it’s not alone. The schedule release has evolved into a full-blown TV special (unlike the draft, though, it’s one where reporters can actually report the news first), and the combine drills have gained plenty of popularity in their own right. And even more people may tune in for them now that they’re shifting to primetime. It makes some sense for the NFL to do that, but it’s just the latest case of their operations becoming made-for-TV events rather than internal moves.