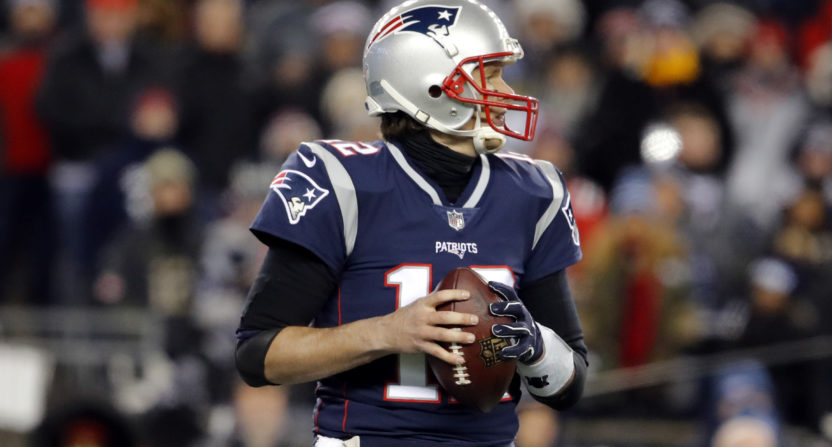 Not long after the New England Patriots marched their way into a seventh consecutive AFC Championship Game, The Athletic’s Tim Kawakami responded to a tweet that pondered the defending Super Bowl champion’s ratings prowess in the playoffs.

I mostly believe CBS wants that Saturday prime-time slot filled with Brady & Belichick and fights for it every year. https://t.co/2MpYnNHTp5

It’s certainly true that CBS absolutely loves the Pats. And they have to, considering that it’s essentially the AFC network thanks to its broadcasting contract. With the Patriots one game away from yet another Super Bowl appearance, it seemed appropriate to take a look at their unprecedented and controversial reign on the NFL from a playoff viewership standpoint. They have been the one certainty in the postseason since their run began in 2001 with three Wild Card games, 14 Divisional Round games, 12 Conference Championship games, and seven Super Bowl appearances (and counting) in the Tom Brady era. The Patriots have been on top for so long that you can call upon three distinctive periods within New England’s run: pre-Spygate, between Spygate and Deflategate, and the ongoing post-Deflategate period.

The pre-Spygate days, which would go from the 2001 season to the summer of 2008, started when the Pats shocked the world and defeated the then-St. Louis Rams for their first Super Bowl title after the 2001 season. At the time, they were the ultimate feel good story as Brady, a 6th-round draft pick from Michigan, took over for the injured Drew Bledsoe early on in the year and eventually finished his second NFL season as the Super Bowl MVP. A formerly moribund franchise would provide further validation that the league entered an era of relative parity, but it took some getting used to. 28.86 million viewers watched New England’s first playoff matchup that year, the infamous ‘Tuck Rule’ game against the Oakland Raiders. Yet, it was the second-most viewed Divisional game that weekend, bested by Green Bay vs. St. Louis where Brett Favre hilariously threw six interceptions, including three pick-sixes 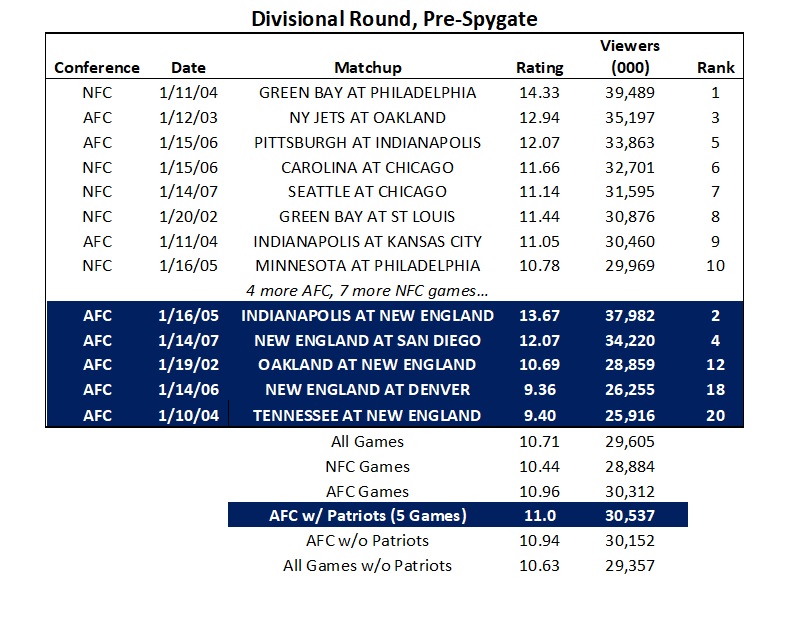 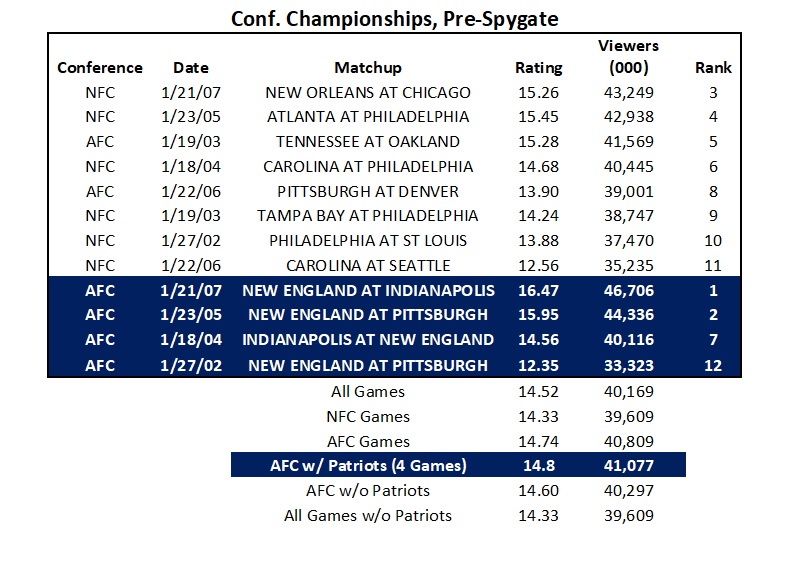 33.3 million people would watch the AFC Championship Game the following week against the Pittsburgh Steelers. However it’s the least viewed third round game of the pre-Spygate era of the Pats. Two years later, there would be a reversal when it came to national interest in the Patriots. The Divisional game against Tennessee was the least watched playoff game of their run, but their AFC title game win over Peyton Manning and the Indianapolis Colts would see a huge lift from 2002. How big? Try nearly seven million more viewers. Now an established power, New England would no longer bring up the rear in terms of the NFL’s playoff offerings – two more dates against the Colts would shatter records at the time, and even another AFC title tilt against the Steelers would garner over 44 million fans in 2005 (for the 2004 playoffs).

The goodwill that the Patriots had built was already wearing thin by the time Spygate was born prior to the 2008 season, going from plucky underdog to league juggernaut to the rarefied air as a loathed entity in sports. The undefeated 2007 regular season was a scorched earth campaign seemingly like no other, and despite losing the Super Bowl to the New York Giants (the first time), New England was the epitome of ‘must-see television’ all year long. Yet just as was the case six years earlier, things didn’t start off like a house afire – over nine million more people watched the 6th-seeded Giants do battle with the NFC’s top-seeded Dallas Cowboys (40.06 million vs. 30.9 million) compared to those who saw the Patriots play the Jacksonville Jaguars.

The eventual Super Bowl participants saw another wide gulf in viewership in their respective conference championships: nine million more watched Giants upset the Packers versus the then-San Diego Chargers losing to the Patriots. In this eight-year period, New England would play in a single Wild Card game (a loss to Baltimore after the 2010 season), six Divisional games and five AFC title games. Looking closely at the lists from this era, you can easily see that the Patriots had crucial dance partners to bring eyeballs to their games. For example, the Mark Sanchez-led New York Jets finally got over the hump against their rivals in the highest-rated AFC Divisional Round game on record and third highest of all time. Also, the Patriots’ battles for the AFC crown had viewership lifts from a mix of their own controversies, impending retirements (Baltimore’s Ray Lewis after 2011) and Peyton Manning’s first playoffs with Denver for the 2014 season. 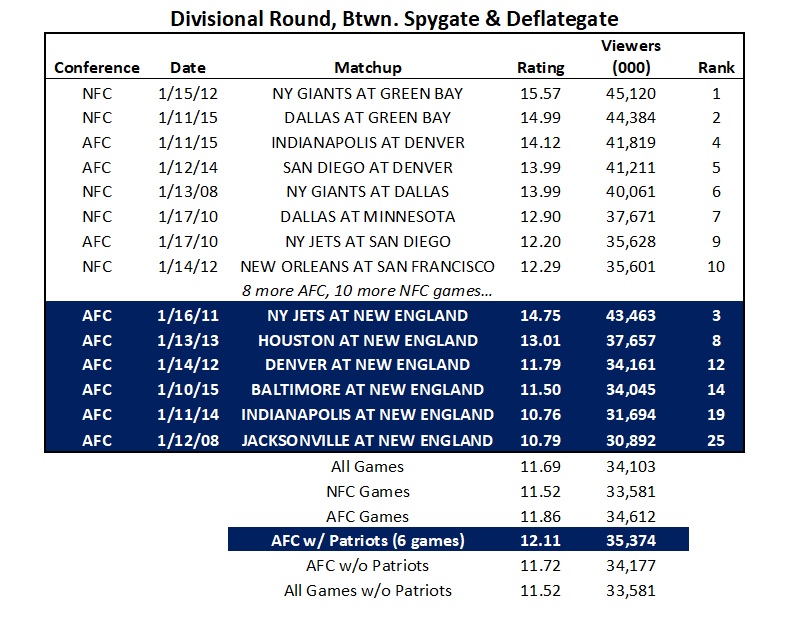 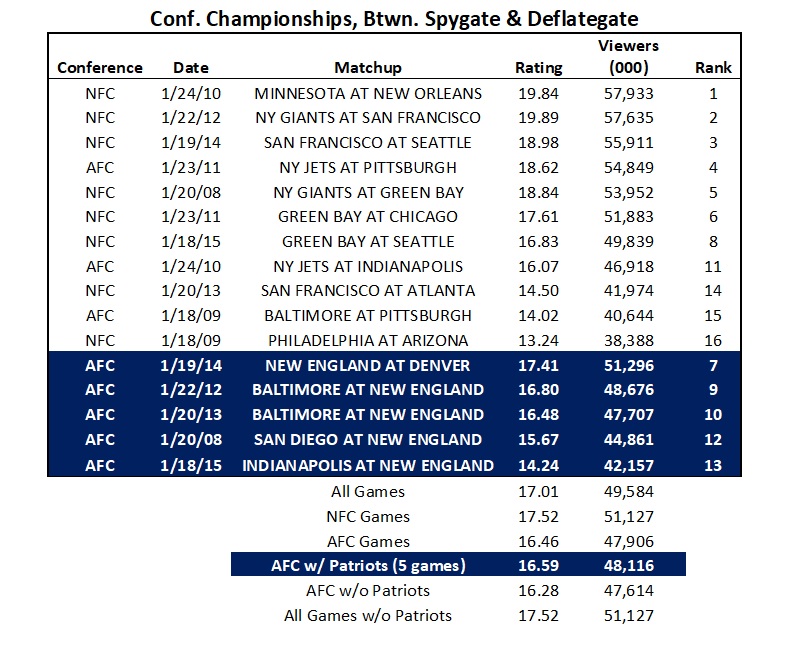 Yet, just as it seemed that Spygate faded from view, it was the 2015 AFC title game against the Colts – now led by Andrew Luck – that fueled the third stanza of this Patriot reign. The 42 million people who watched that game was the third-least viewed conference championship involving New England in the Tom Brady era, but it set off another campaign of rage that the NFL has been feeling ever since. The CNN breaking news segments, internet conspiracy theories, and horrific deflated balls jokes made for similarities between the 16-1 season in 2007 and their 2015 season, which is likened to a season-long middle finger to Roger Goodell for his punishments on the Pats.

While their two Divisional round games hadn’t fared as well historically – Kansas City in 2016 and Houston last January rank 19th and 21st among all non-Super Bowl games involving New England since the 2002 playoffs – their last two AFC title games are among the top three of all non-Super Bowl playoff games in the last two years. Most impressive was the 2016 game between Denver and New England, which was the most watched conference championship since 1986, when the Andre Tippett/Tony Eason-led Patriots defeated the Miami Dolphins. A swarming Broncos defense got the job done while a weak-armed Peyton Manning did just enough to get back to the Super Bowl. 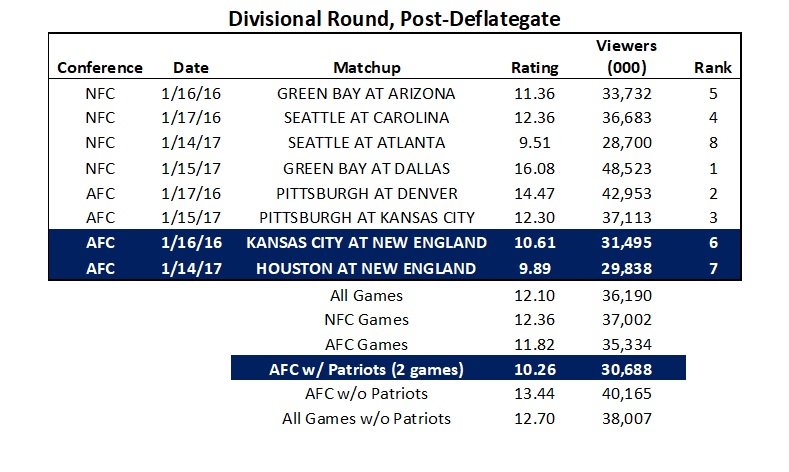 Certainly, there are varying factors in how much better a game performs as teams are eliminated. First, the best games, or at least the most intriguing ones, have the right dance partners. Brady versus a Manning (Peyton or Eli) drew eyeballs like few other events in sports history, but the same can be said for any combination of Dallas, Green Bay or even once mighty NFC powers like the Giants or San Francisco 49ers. The broadcast window, whether we’re talking the late game on Saturday or the early game on Sunday, arguably matters more in the Wild Card and Divisional rounds than they do during Conference Championship Sunday. Finally, the network plays a role if a game is simulcast as ESPN did with ABC for one Wild Card game over the past two seasons or when NBC takes a Divisional contest from either CBS or FOX as they have each of the last three postseasons. Yet, the channels mean little for conference title games with CBS locked to the AFC and FOX set on the NFC.

New England’s victory over the Tennessee Titans was not only the least-viewed game of last week’s Divisional Round, but it’s the least-viewed Patriots postseason game since that 2006 Wild Card matchup with the Jaguars. This current postseason hasn’t trended as well as recent seasons, but if the Jaguars shock the world and knock off the defending Super Bowl champions, perhaps this is the game that can buck the trend. And who wouldn’t want to see such a catastrophic upset of the televised apple cart?