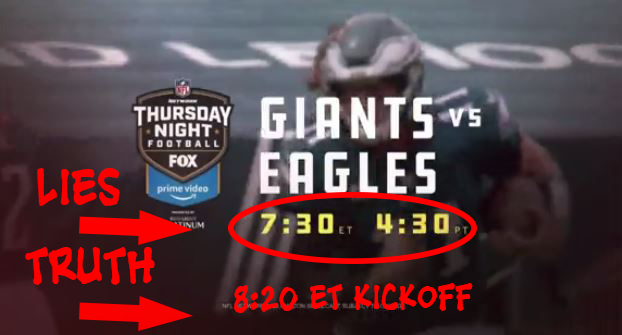 With the pandemic wreaking havoc on the sports calendar, now more than ever sports fans are struggling to keep pace with the start times of games. While it’s not hard at all to find the information with a few clicks on your phone, network promos for upcoming games are seen by millions of viewers, and many of those viewers go off of these communicated times and plan accordingly.

However, that’s not the best course of action, as more often than not, these promos will actually advertise the start of pregame coverage rather than the game itself.

I spoke with several people who have experience either producing or placing promos, and found that the practice of misleading viewers on start times of games is a gray area. Two things were consistent in those conversations.

The above TNF promo fails those tests, as does this Sunday Night Football promo.

While promoting a start time almost an hour and a half before kickoff seems like a pretty blatant misrepresentation to viewers, here’s a dissenting opinion from someone in the business.

That argument does make sense. Even if we apply this standard,  I’ve still noticed Fox in particular has gotten a bit cavalier with their promos for games with unusual start times. Here’s a promo tweeted out by a local affiliate for the Monday game, which started at 5 PM.

Monday it's a shootout between two of the league's best young stars as Patrick Mahomes leads the Chiefs against Josh Allen and the Bills on FOX 25, NFL Network, and streaming on Prime Video. pic.twitter.com/34j4OgX4cX

Fox saying on preview promo that KC-Buffalo is at 4:30 is terrible.

At least let Joe Davis say kickoff is at 5.

What I particularly don’t like about it in this scenario is that it is an odd time to have a game so people are looking for correct info.

Big Time Monday! FOX61 News First at 4, followed by the Chiefs vs the Bills in NFL action at 4:30. Expect More from FOX61! pic.twitter.com/5gotVTNEEt

The 4:30 start time advertised in the promos also seemed to register with many fans, who didn’t bother doing the extra legwork.

Chiefs really playing at 4:30 on a Monday I know everybody here mad as fuck they can’t call out of work lmao

Chiefs Bills at 4:30 tomorrow? Imma be watching at work goddamn

They got the Bills and Chiefs playing at 4:30 in the afternoon like a JV game

The Chiefs/Bills game is on Monday at 4:30 EST? That's weird

It’s not hard to imagine that some fans saw the advertised 4:30 PM start time and altered their schedule that day accordingly. The dissenting network source quoted above also defended the strategy of guiding viewers towards the pregame shows.

“Honestly it’s not good but here is the deal- We pay a lot, and probably too much for these sports rights and often we don’t actually make any money on them. The pre game shows is where we get some of that money back. Some networks for some games just let the promos go out the door like this knowing it will lead to this because it’s unspoken that we really need those pregame eyeballs. There isn’t really an industry standard or defined corporate standard.”

Fox has been in the spotlight this week because of the sheer volume of premier events the network has aired this week, including the NFL on Sunday, Monday, and Thursday, the NLCS on Sunday, and the World Series on Tuesday, Wednesday, and Friday.

Even more strange is the inconsistency of the graphics. In this schedule broadcast during Game 2 of the World Series, the “coverage begins” label was clearly listed above the start times. 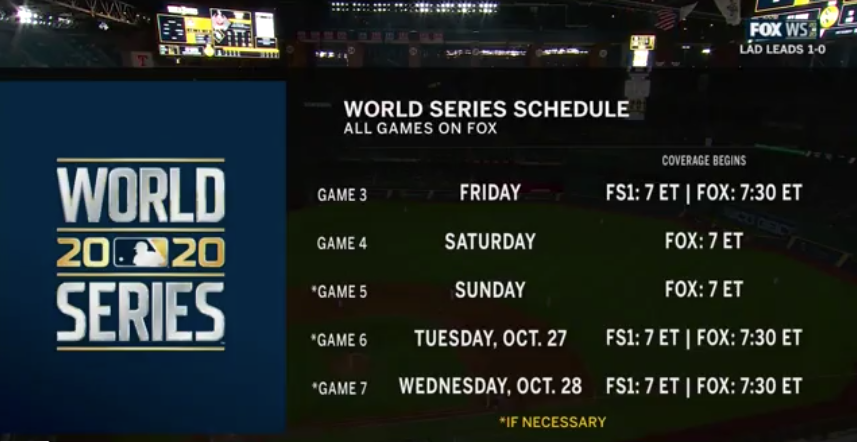 Here’s a read for Game 1 of the World Series, which had a first pitch time of 8:09 PM. What seems more egregious about this instance is that you have Joe Buck, the face of Fox Sports, relaying the information and reinforcing the on screen start time. He’s basically vouching for the 7:30 PM start time, and some of the backlash from people who didn’t double check the first pitch time will be directed at Buck for merely doing the read.

The reality is that networks are never going to reliably tell us what time games actually start in promos for those games, and you should double check elsewhere if you have questions. Beyond that, if the network does want to be evasive about start times to juice their pregame ratings, ideally they should just adopt the “coverage begins” standard across all promos. That’s at least way more honest than the current standard.