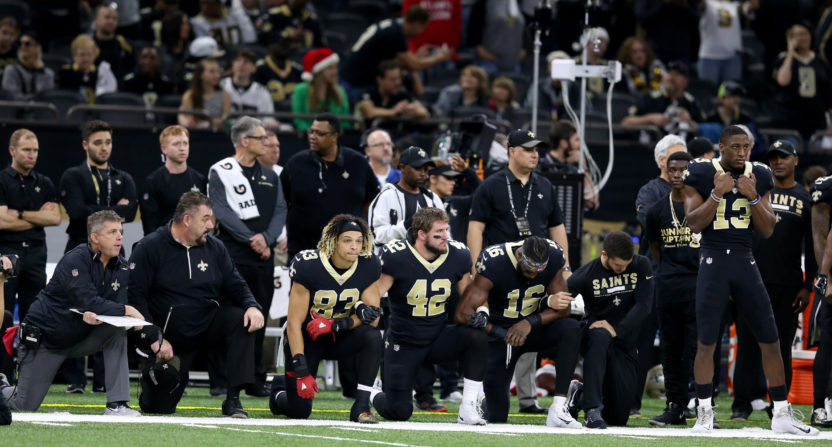 One of the early storylines of the 2017 NFL season was the player protests during the national anthem. All of the networks aired them to start, but as they began to fall off, the networks stopped showing them. As we approach Super Bowl LII in February, there’s the possibility that they could occur again in front of TV’s largest audience of the year.

If that happens, NBC plans to show them. During the Television Critics Association (TCA) winter press tour, Sunday Night Football and Thursday Night Football producer Fred Gaudelli told the audience if any player protests during the national anthem (which will be performed by Pink), NBC won’t hesitate to spotlight the player.

“It was a pretty big story in our country this fall. We’d show it. When you’re covering a live event, you’re covering what’s happening. If there are players who chose to kneel, they will be shown live.”

The protests during the anthem gained national attention and also caught the ire of President Trump, who denounced them on Twitter and during various speeches. Not all of the protests have been shown on television, but they have brought on scrutiny from both sides of the political aisle, with some pundits and many fans blaming the protests for lower NFL ratings and attendance.

Gaudelli was also asked about the Peacock’s chances for renewing the rights for Thursday Night Football, and didn’t give much of an answer. NBC’s contract to air its second NFL primetime package ends after this season.

“I think those negotiations are just about beginning,” he said. “It’s really hard to speculate. It’s really early in the game.”

CBS has aired four seasons of Thursday Night Football, and NBC has aired two. The NFL will announce the new contract for TNF after the season is over.