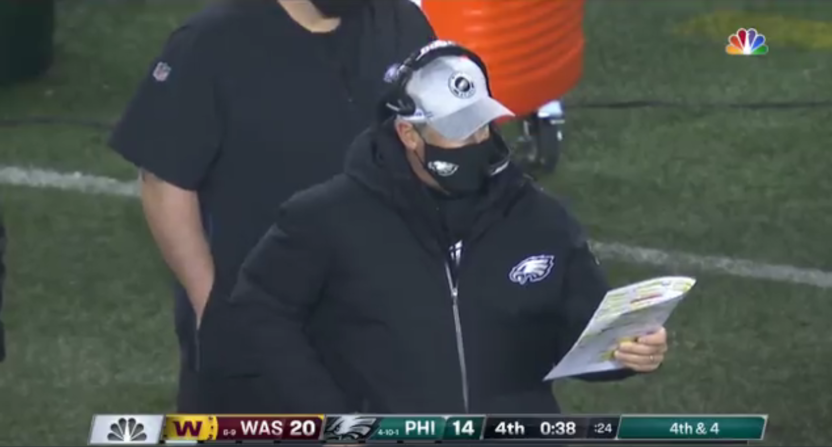 Philadelphia Eagles’ head coach Doug Pederson’s bizarre decision to pull starting quarterback Jalen Hurts at the beginning of the fourth quarter of Sunday night’s game against Washington (with the Eagles trailing 17-14) wound up taking a lot of criticism from the media, including the NBC broadcast. With the game still very winnable, Pederson replaced Hurts with Nate Sudfeld, who had only thrown 25 NFL regular-season passes before this, and none since 2018. And the Eagles predictably lost 20-14, boosting their draft position by four slots but raising questions about their apparent deliberate attempt to tank. And that even brought them in for criticism from the Sunday Night Football broadcast team of Al Michaels and Cris Collinsworth. Here’s what Collinsworth said near the end of the game:

Cris Collinsworth's "Al, I couldn't have done it" comments on the Eagles' move to pull Jalen Hurts for Nate Sudfeld. pic.twitter.com/2vm2cPDpSV

And here’s how Michaels responded:

"But in this circumstance? Come on." Al Michaels was not a fan of the Hurts-for-Sudfeld pull pic.twitter.com/w4e9zpXD0U

“I agree, under the circumstances, absolutely. [If] they’re getting blown out, yeah. And we mentioned yesterday, Doug said he wanted to get Sudfeld into the game. But in this circumstance? Come on.”

Here’s Michaels’ later comment on this as the game ended:

"And the Giants have to be beside themselves, and who can blame them?" pic.twitter.com/M24JiONTGi

“I’m with you. So much at stake. Guys want to win the game. Hurts had a pretty good night, all things considered. His numbers weren’t that great, but a couple of rushing touchdowns, and clearly a guy who is a big part of the conversation for the future. And the Giants have to be beside themselves, and who can blame them?”

A whole lot of other NFL media figures weighed in as well. Here are a few of them, starting with ESPN’s Dan Orlovsky:

That was a mockery pic.twitter.com/llXwIiRDwt

You are my enemy Doug Pederson

If an Eagles player recovers a fumble and starts running toward the end zone along the Philly sideline, would Doug Pederson trip him?

Says he was coaching to win this game – logical next question would be why he thought Nate Sudfeld gave them a better chance to win?

Doug Pederson should be ashamed. What happened to “integrity of the game”?

The Eagles seemingly had no interest in winning on Sunday, and @ConorOrr says the NFL should let teams know that isn't acceptable https://t.co/GVTCiNTOAk

And The Bergen Record’s Art Stapleton:

No one should feel bad for the Giants. As I said, they made their bed.

This is a bigger issue about the integrity of this game that Doug Pederson is mocking. Hard not to see it any other way.

Even the NFL’s website covered this, with “‘Sickening’: Giants players voice displeasure with Eagles’ decision to bench Jalen Hurts vs. Washington.”  So this certainly got a lot of attention. And while there have been plenty of other questionable moves made over the years likely in the name of tanking for a better draft pick (something that’s particularly bad in the NFL when it comes to losing certain games, as the league’s lack of a draft lottery means there’s a clear correlation between losing and picking higher), those have usually been front-office moves in the offseason. It’s much more unusual to see a team deliberately insert a worse quarterback in a close game.

And Sudfeld’s tenure under center saw one drive end with an interception, the next end with a fumble, and the third end with him throwing a short pass with no hope for a touchdown as time ran out. So it seemed to produce exactly what Pederson appears to have wanted; a loss.

As mentioned, this isn’t the only time we’ve seen questionable moves that may have been attempts to tank. But this one was particularly obvious, and doesn’t have much of an alternative explanation. And it received more scrutiny than normal thanks to it coming in a primetime game, the final game of the regular season, and a game with obvious playoff implications. And it got roasted by a much wider range of national media than normal, including Michaels and Collinsworth.

And that criticism is deserving. The league talks a lot about protecting “the integrity of the game,” but this sure looked like an attempt by one team’s head coach to sully that integrity and deliberately throw away any chance at winning. And that’s rough for the Eagles’ players who were trying their hardest, and rough for those who bet on the Eagles or had their players in daily fantasy competitions, and rough for the national TV viewers who wound up with a game where one team’s head coach was seemingly trying to lose. We’ll see if the league has any response.