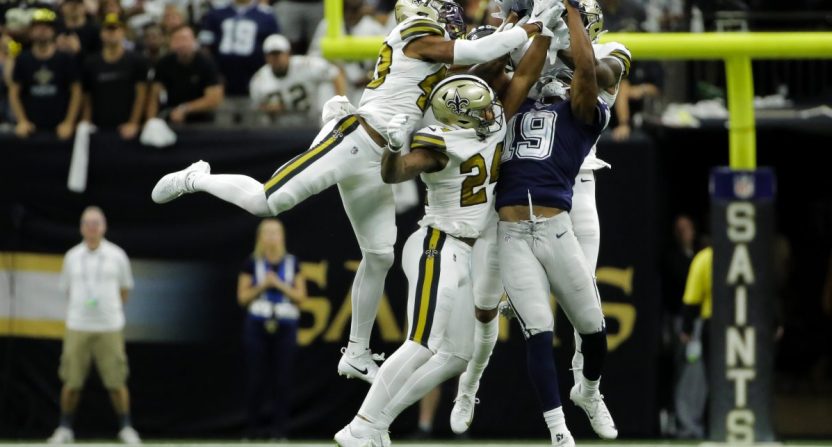 NFL ratings being up this year has been a theme for these Monday ratings posts, and Week 4 certainly continued that trend.

NBC’s Sunday Night Football broadcast, for example, posted its best Week 4 rating since 2012, with a 15.5 overnight:

Last week’s Sunday Night Football rating was also strong, especially considering it was going up against the Emmy Awards. CBS had the doubleheader this week, and their afternoon national window delivered as well.

CBS Sports’ NFL national game on Sunday, Sept. 29 scored in the ratings with 13.0/26 average household rating/share in the metered markets, a +6% increase versus its comparable national game window last year (12.3/24; Week 4 – 9/30/18). The national game was highlighted by the Minnesota-Chicago game.

Fox, meanwhile, had been riding an impressive streak of year-over-year improvement in every broadcast window, which was bound to be broken at some point. This week was that week, according to Paulsen at Sports Media Watch:

The exception to the run of multi-year highs was FOX, which posted its first decline of the season. The network averaged a 10.8 for singleheader coverage featuring Chiefs-Lions or Buccaneers-Rams in most markets — the lowest in Week 4 since 2016 on CBS (10.6).

Still, through the first month of the season, it’s tough to argue that the numbers have been anything but positive from the league and network perspective.

Of course, tonight’s Monday Night Football contest features the winless Bengals at the winless Steelers, so that particular number might fall back a bit, but it’s still an impressive start overall.