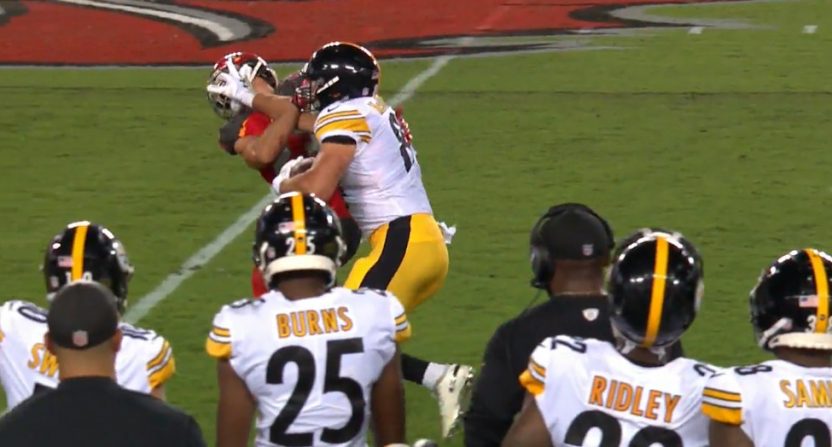 Pittsburgh Steelers tight end Vance McDonald embarrassed Tampa Bay Buccaneers safety Chris Conte with a stiff arm that sent Conte to the ground on a 75-yard touchdown Monday night. It was an amazing play, and a very embarrassing one for Conte.

After the play, many folks on Twitter mocked and trashed Conte, and some even @’d Conte on Twitter (which is absolutely awful; people really, really need to stop doing this).

Well, some of those people attacked the *wrong* Chris Conte on Twitter.

Chris Conte, a reporter for NewsChannel 5 in Nashville, tweeted, “IT’S HAPPENING AGAIN. Can someone tell me how FOOTBALL player Chris Conte just screwed up? #wrongconte,” and included a screencap of people tweeting at him.

And more tweets from Conte the reporter:

More of the current #wrongconte tweets currently coming in … pic.twitter.com/EboS1haOEv

I kind of missed these tweets. Friendly reminder, I do NOT play football. #wrongconte pic.twitter.com/4JWdcfjyHp

As Conte alluded to in his initial tweet, this has happened before. Like in 2013, when the football-playing Conte was blamed by Chicago Bears fans for a heartbreaking Week 17 loss — that decided the NFC North — against the Green Bay Packers. Many Bears fans sent angry tweets to Conte the reporter, and he at least got over 100 new followers out of it. Hopefully he’ll get a follower boost this time around as well.

Also .. football player Chris Conte blocked me on Twitter .. kinda like that stiff arm he got tonight pic.twitter.com/MZTheLKaC7