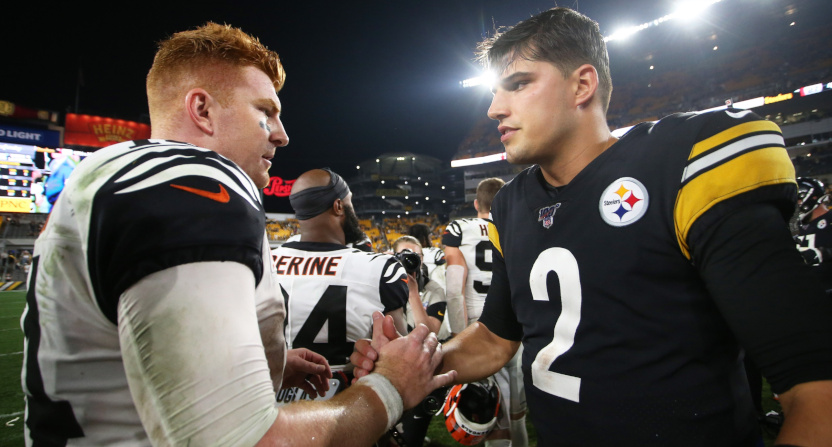 The final viewership ratings are in for ESPN’s Week 4 Monday Night Football broadcast (the Pittsburgh Steelers’ 27-3 home win over the Cincinnati Bengals), and they tell a different story depending on if you’re comparing year-over-year or comparing to last week. As per Showbuzz Daily’s Mitch Metcalf, the game drew an average Nielsen 2+ viewership number of 10,467,000; by contrast, last year’s Week 4 MNF game (the Kansas City Chiefs’ 27-23 win over the Denver Broncos) pulled in 13,214,000 viewers by that metric.

So that’s a 21 percent year-over-year drop for MNF. However, it’s notable that last year’s game was a close one featuring a Kansas City team that was still unbeaten at this point, and there was quite probably a fair bit less interest in the Steelers (one of the many teams hurt by quarterback injuries this year, they were starting backup Mason Rudolph) and the Bengals, who both were 0-3 entering this. (The Bengals remain winless after the loss.) And that was pretty close to (and even a slight rise over) the final 2+ viewership numbers of 10,327,000 for last week’s Bears-Redskins game. Thus, it’s not all that bad in terms of this year’s MNF ratings.

It’s also interesting that this game drew a fair bit more interest in Pittsburgh than it did in Cincinnati. Here’s what Deadline’s Dominic Patten wrote about that (using overnight ratings numbers, not finals):

As always, local ratings need to be taken with the context of how big the market is. As Sports TV Ratings’ Robert Seidman noted earlier this week, those ratings are percentages, so a smaller percentage in a larger market means more viewers than a big percentage in a smaller market. But in this case, Pittsburgh is a bigger market (1.1 million as per Nielsen, 24th in the U.S.) than Cincinnati (850,000, 35th), so the local rating there is pretty big. (And it makes sense; there were probably more Steelers’ fans who stayed engaged throughout their team’s win than Bengals’ fans who stayed tuned in throughout a blowout loss.)

All in all, this double-digit viewership drop from last year isn’t necessarily a huge blow for ESPN; it’s to be expected that you’re going to get a lower number for a matchup of winless teams that turns into a blowout than the number you got for a matchup featuring one undefeated team narrowly beating a division rival, and keeping pace with what last week’s numbers did isn’t terrible. But that speaks to the larger issues with ESPN’s MNF schedule this year (in three different categories, they’re behind NBC’s Sunday Night Football and Fox’s Thursday Night Football, and ahead of only the NFL Network-only Thursday night games). We’ll see how they do with the 2-2 Cleveland Browns against the 3-1 San Francisco 49ers.