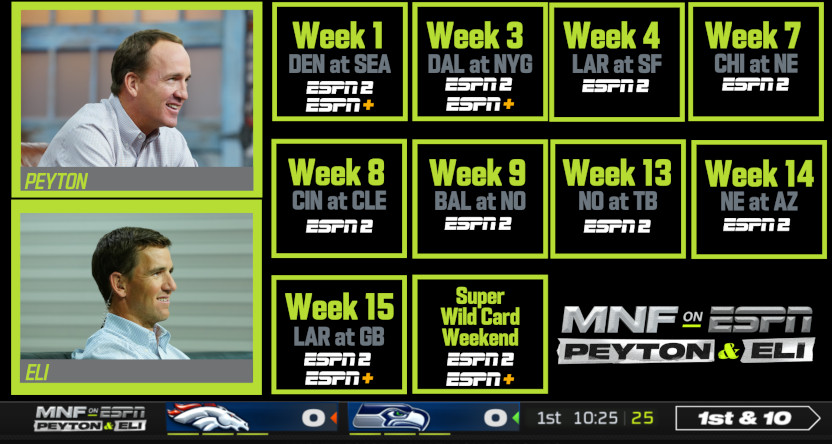 It’s been known since February that Peyton and Eli Manning will be sticking with ESPN through at least 2024, and providing their ManningCast (or Monday Night Football with Peyton and Eli, if you work in Bristol) alternate presentations for at least 10 Monday Night Football games per year. But which specific games the Manning brothers would comment on has been a question. That’s now resolved for 2022, though, as seen in the graphic at top and the ESPN PR tweet below:

The Mannings are back! ??

Here’s more from ESPN’s release on this:

The Emmy-award winning Monday Night Football with Peyton and Eli, with its off-the-cuff commentary, authentic reactions, entertaining facial expressions and treasure trove of guests, rides into its second season when Russell Wilson and the Denver Broncos travel to Seattle for the regular season debut of ESPN’s Monday Night Football (Sept. 12, 8 p.m. ET). The ESPN and Omaha Productions’ joint venture will produce 10 Monday Night Football alternate presentations throughout the season, continuing the extensive relationship between The Walt Disney Company and Peyton Manning’s production company.

Following the second season premiere, Peyton and Eli return in Week 3 for the Dallas Cowboys at New York Giants and Week 4 when the Super Bowl Champion Los Angeles Rams travel to the San Francisco 49ers. Later in the season, Joe Burrow and the Bengals take on their in-state rival Cleveland Browns (Week 8), Tom Brady and the Buccaneers host the Saints (Week 13), and Matthew Stafford’s Rams head to reigning back-to-back MVP Aaron Rodgers and the Packers (Week 15). The Super Wild Card Monday night matchup will conclude the season.

It’s certainly notable to see the ManningCast there for ESPN’s first Monday Night Football game in the new Joe Buck-Troy Aikman main booth era, which is the Denver Broncos at the Seattle Seahawks on Sept. 12. That game also sees Broncos’ QB Russell Wilson, he of the giant just-signed extension and the 43-8 win over Peyton’s Broncos in Super Bowl XLVII February 2014, taking on his old team. So there are plenty of storylines around it. And beyond that, there have been lots of reactions to which games the Manning brothers will call this year.

It’s also interesting that the first two and last two ManningCast broadcasts will be available on ESPN+ as well as ESPN2, but the six in the middle won’t be. Four ManningCast streams on ESPN+ is nice for those who have that over-the-top streaming service but not a traditional MVPD package including ESPN and ESPN2. However, much of the ManningCast will still require a MVPD subscription to watch.

We’ll see how year two of the ManningCast goes. The first season last year drew quite a bit of praise, and it produced a lot of entertaining moments. And it went well beyond a typical alternate feed in both the amount of attention it drew and the amount of viewers it drew. But we’ll see how the numbers and talk stack up for it in season two.